Cottrell is no 'freedom of speech' advocate but a violent fascist

Authentic UPF Leader Blair Cottrell is no freedom of speech activist, he is an authoritarian who daydreams about bloody revolution and power, writes Tom Tanuki.

Blair Cottrell’s bid to contest his conviction for inciting hatred and contempt against Muslims in the Supreme Court of Victoria has been turned down.

The conviction was recorded against him over a "mock beheading" video he recorded in 2015 with a couple of other racists, back in the salad days of the old United Patriots Front (UPF). The overturned appeal is just the latest in a long series of so-far unsuccessful attempts to string his conviction out since 2017 — an effort to transform the issue into a broadly appealing Tommy Robinson-style "freedom of speech" theatre. It hasn’t gained much traction.

Regardless, I’m tired of seeing Cottrell lumber around dwindling media packs in a tight suit and a Hitler combover banging on about my freedom. This isn’t the Blair I know.

I miss the Blair that insists he will execute people like me.  Authentic Blair. 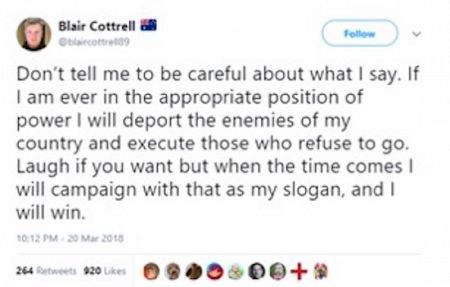 Back before every major social media platform banned him for being authentic, Cottrell used to post like that on Twitter and Facebook a lot. He’d daydream about nationalist revolutions and mass executions for traitorous leftists. The posts were often written late in the morning. I’d wonder to myself if perhaps someone was fresh out of the gym and still feeling a bit God-like, as the trace elements of juice continued to work their wonders. Who knows?

But I’d acknowledge then, as I do now, that at least that was genuine Cottrell. That’s rare. Straight talk is something that white supremacists who receive media attention often find impossible because saying what they really think scares away the cameras. Again, at least he was being honest in those moments.

We also need to be honest in what our aims are in responding to white supremacists. I’ve helped organise anti-racist efforts against the likes of Cottrell since 2016, but I refuse to clap like a cheerleader over convictions or other sanctions issued by the state. State intervention was never the desired outcome. Why, my momentary schadenfreude barely rates a mention.

Looky here! Andrew Bolt has responded to my article about the Million Flag Patriots in @independentaus, 'The media still thinks I run the United Patriots Front'!

Bolt writes in his blog:

"The Left must think there aren't enough real racists and gun nuts to hate... [1/6] pic.twitter.com/RS7oUJ5u07

The victories over the organised racist movement in Australia that I'm proud of are the ones that anti-fascists and ordinary people achieved. Researchers, activists, organisers, writers, artists, unionists, speakers, workers — countless groups united to render the street-level patriot movement all but inert. The story of combatting their movement is one that’s much bigger than most Australians know — and one I hope will eventually be told in full.

That was the real win against organisers like Cottrell.

It benefits the narrative of people like Cottrell to frame the resistance to his efforts as being state-backed, but it’s a lie. Many ordinary, decent people put in a lot of hard work. Consequently, the people came to popularly recognise him as a neo-Nazi and then they rejected him. So, I’ve always believed that the best answer to street-level organised racism lays on the street, in culture and in the hands of popular working-class movements — not in pleading for powerful institutions to intervene.

Cottrell’s efforts to overturn the conviction are nowhere near as honest as those old post-gym promises to lynch "Commies". I’m not holding him to some impossible ideal here, lest this is beginning to sound like people who tell lefties that they’re hypocrites for owning an iPhone. Yes, people need to navigate the system they’re born in.

The thing is, however, that video really did incite hatred and contempt for Muslims. It’s not just the terms of the charge laid against Cottrell, it’s also one of the clear aims of the video. This is precisely what nationalists do. They pick targets, like Muslims, LGBTI+ people, Jews or Indigenous peoples and render them as hostile out-groups. They generate momentum for their movement by launching sustained attacks on these targets, in the hopes of strengthening the bonds of their in-group.  Uniting people through common "enemies" confects a staunch kind of national loyalty.

That's Cottrell's only real game. Since 2015, he has tried to accumulate more political and cultural capital for nationalism by inciting the persecution of various out-groups. If Cottrell was being honest, he'd agree that he did exactly what the court said.  He has to do it to be an effective nationalist.

Let’s be clear: Cottrell is not a "freedom of speech advocate". The only interest he has in quibbling over a conviction and a $2,000 fine, is the continued media exposure he needs for you to remember who he is. He is not a free speech activist — he is an agitator for nationalist revolution and the execution of declared traitors to the state en masse. That’s called authoritarianism, or fascism.

Wow. The Age calls Blair Cottrell a "far right activist". When even the Herald Sun knows "racist" is the more accurate term, you know your journalistic standards have truly left the building. pic.twitter.com/0jAZVAKbYT

To realise his true goals, Cottrell never needed a conviction overturned. He needs the people to quite literally tear down any court system that would issue that kind of conviction in the first place. And then, to erect an authoritarian state construct in its place.

Cottrell’s star has waned but he is a persistent and nagging presence who still possesses a talent for grabbing the headlines, so it’s important we remember exactly what he is. Ignore the ongoing "freedom of speech" charade entirely.

Heed instead the words of the man that threatened:

'Don’t tell me to be careful about what I say.'

That’s authentic Blair Cottrell.  The authoritarian who daydreams about bloody revolution and power.

Tom Tanuki is an online satirist, social justice commentator, writer and comedian. He has worked in anti-racist political comedy, most notably through his satirical group the Million Flag Patriots and anti-racist group Yelling At Racist Dogs (Y.A.R.D.).

EDITORIAL EXCERPT: Nazis in Parliament — the enemy within https://t.co/lze3oeZpkH @IndependentAus