IT'S NOT OFTEN you find yourself having to correct an article you wrote based on different responses you receive to a freedom of information request, but that is exactly what I’m doing here.

Last month, in response to a Freedom of Information request for copies of documents, cables or correspondence relating to the use – or knowledge of the use – of white phosphorus munitions in Iraq and Syria by the Department of Defence or the U.S.-led coalition in 2017, the Australian Department of Defence confirmed that there were no documents found matching the scope of the request. 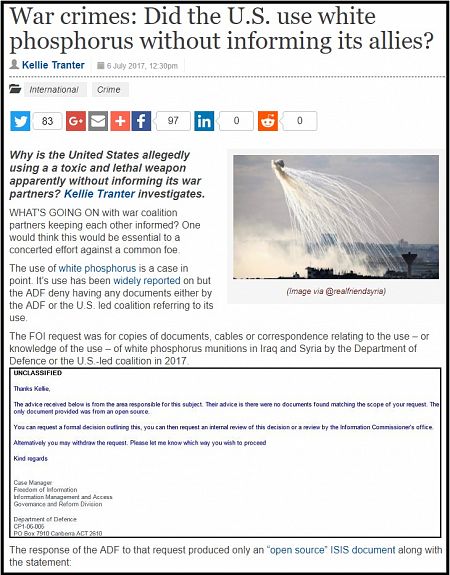 Rather than accepting that and withdrawing my request, I asked that a formal decision be made. I’m glad I did.

In a letter from the Department  dated 19 July 2017,  which I received on 24 July 2017,  it claimed that it had identified two documents as matching the description of the request but said it was refusing access on the grounds the documents pertain to intelligence originating from or to an agency exempt from the Freedom of Information Act.

I wrote to the Department on 26 July 2017 to ask the obvious question:

‘Is it now the Department’s position that two documents actually exist relating to the use – or knowledge of the use – of white phosphorus munitions in Iraq and Syria in 2017 but that they won’t be released?’

The Department’s response of 27 July 2017 confirmed that:

‘You are correct, the action area initially advised no documents could be found. Further searches then located two documents access to which were denied.’

The decision letter does also note that

So, my original article should be corrected to say that the Department of Defence was and is aware that white phosphorus was or is being used by members of the U.S.-led coalition in Iraq and/or Syria.