Two football executives being forced to resign after a media campaign scandalising workplace affairs is a huge backward step for the nation, writes lawyer Gamini Jayasinghe.

A WEEK-AND-A-HALF AGO, on 14 July, embattled AFL CEO Gillon McLachlan sought to explain the sudden resignation of two senior AFL executives, on the basis that each had engaged in "inappropriate" affairs with younger female colleagues. McLachlan declared that, despite there being no “harassment” or “complaint” from the women concerned, the senior executives must be “judged, as they should be, to a higher standard” and, as such, had to go.

Whilst the AFL may consider it just took a giant step towards equality in its workplace, it has in fact, just set us back 40 years.

Foremost, we must acknowledge that McLachlan should not wear all the blame; the Herald Sun boastfully forced his hand.

In a salacious piece to awaken the God-fearing Ned Flanders in all of us, Stephen Drill writes: 'How the affairs unfolded' and 'How we broke the story', accompanied by an eye-catching table likely to impress even the most adept PowerPoint users. While the Herald Dun opts for the obvious headline ‘AFL sex scandal: Simon Lethlean’s finals frolics stun colleagues,’ a more apt title would have been ‘Thou shalt not commit adultery,’ with an illustration of the hand of God pointing directly at the pair. 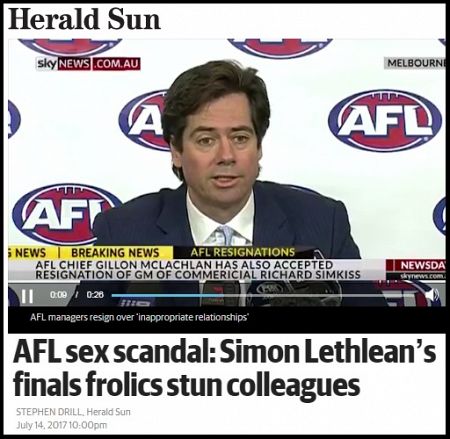 In the absence of discrimination or harassment towards the women in question, it appears that the only impropriety is that the relationships are considered to be affairs. This “higher standard” is more akin to a moral code — that infidelity is somehow incompatible with the values of a family-centric organisation. Respectfully, such thinking is from an earlier time – about 40 years or so ago – when infidelity was still relevant to divorce, and "cheating" was not to be understood, but abhorred without due consideration. An honest examination of infidelity would necessarily involve a fair consideration of the relationships from which the parties have drifted.  In this regard, the family-centric AFL would have better-served the public interest by showing more understanding, than pandering to the black-and-white thinking of a conservative tabloid.

In separate pieces, journalists Caroline Wilson and Rita Panahi seek our indignation that these vulnerable, young women must be protected from such old, powerful male types. With respect, the women in question are not particularly young, nor are the men particularly old. The journalists ask us to deplore the treatment of these defenceless women in the workplace, but avoid the notion that women can be empowered to choose their relationships — for better or worse.  Both conspicuously paint one woman as a hapless “legal staffer,” an “underling”, despite the fact that she is an experienced lawyer from international law firm DLA Piper, with additional and perhaps soon-to-be-useful experience at the Fair Work Commission. Both Wilson and Panahi would do well to recall that the last woman who was pushed, prodded and demeaned as a hapless “legal staffer,” went on to become the prime minister of this country.

In a subsequent piece, Wilson diverts from the story to make peculiar reference to former AFL CEO Andrew Demetriou.

'Office romances are nothing new at league headquarters. At the time Andrew Demetriou was appointed AFL CEO some 15 years ago, his partner and more junior colleague Symone was pregnant with his twins. But on that occasion both parties were single.'

Whilst the point of the anecdote is confusing (given that Demetriou and Symone have since been married for 15 years and have four children together), Wilson’s agenda is not — discrediting the AFL sells papers.

Amidst our collective outrage, commentators demanded that the senior AFL executives be sacked before their resignations were proffered. Further mention was made of the involvement of Kate Jenkins, the Sex Discrimination Commissioner at the Australian Human Rights Commission, to strengthen the narrative that such terminations would be permissible at law. On the contrary, you cannot be discriminated in the workplace on the basis of your marital or relationship status. It would be equally difficult to show that such terminations would be anything but harsh, unjust or unreasonable, or that the pair had breached a term of an employment contract; infidelity is not a sackable offence. Whichever way you look at it, such terminations would have likely been unlawful and the AFL is fortunate the pair "offered" to resign. Hopefully, for the now-unemployed pair and their families, there were substantial payouts which followed their sudden exit.

It may surprise you to note that, when granting a divorce, a court will typically give no consideration to infidelity; a marriage must simply have broken down irretrievably and for a requisite period. Incredibly, this forward-thinking has its origins in the Family Law Act 1975, a progressive piece of legislation, drafted more than 40 years ago. That this month we have entertained – and been "entertained" by – the private matters of infidelity amongst consenting adults, is an indictment on those lawmakers who, in their profound wisdom, decided that relationships were no longer to be considered in black and white terms.

While many may think “we have a come a long way” in terms of equality in the workplace, sadly, we still have a long way to go.

Gamini Jayasinghe is a Melbourne lawyer who blogs at The Artful Advocate. You can follow Gamini on Twitter @Artful_Advocate.

'When did employees have to surrender their private lives?': AFL faces backlash over resignations https://t.co/zU2O1AGU0O The poor women ?

Nothing but the truth. Subscribe to IA for just $5.

25 August 2017, 8:00am The most disconcerting aspect of George Christensen’s anti-halal campaign is that ...