In the last few years zombies have taken over post-apocalyptic fiction from their evil dead vampire cousins. This weekend the zombie apocalypse takes over the streets of Brisbane, writes Glenn Davies. 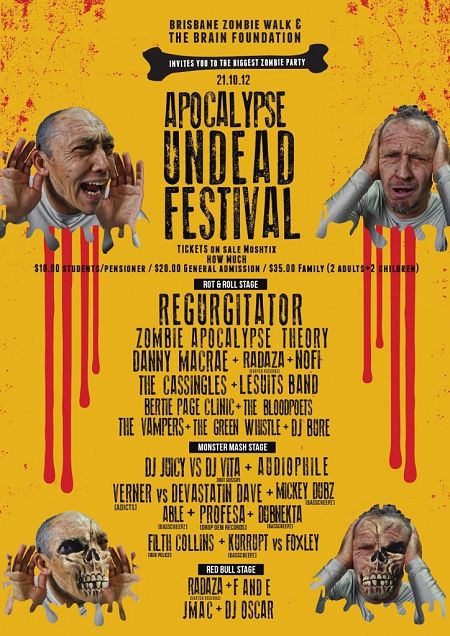 IT HAS BEEN a big week for Brisbane zombie fans. Early in the week the much anticipated Season 3 premiere of the hit zombie TV show The Walking Dead aired around the world and this weekend the Brisbane Zombie Walk will take to the streets for its annual outing.

Before the end-of-the world Mayan Calendar apocalypse hits in December 2012 there will be Zombie Walks around the world. A Zombie Walk is an organized public gathering of people who dress up in zombie costumes. The participants then make their way around the city streets and through shopping malls to a public space in a somewhat orderly fashion. Zombie Walks have become relatively common in large cities, especially in North America, often becoming annual traditions. Brisbane also has a long tradition of holding Zombie Walks with the apocalypse arriving in Brisbane on Sunday, 21 October 2012 at Victoria Park in Spring Hill.

In modern popular, culture zombies are closely tied to the idea of a zombie apocalypse caused through the collapse of civilisation due to a vast plague of undead. The early Zombie Walks began in North America in 2001 and 2002. The mid-to-late 2000s saw an exponential gain in popularity for zombie walks due largely to the increase of successful zombie films at the time, such as the Resident Evil movies, 28 Days Later, Zack Snyder's Dawn of the Dead, Shaun of the Dead, George A. Romero's Land of the Dead, and Zombieland.

The annual Brisbane Zombie Walk began in 2004 with just 300 participants. By 2005, it had grown to 1500 people as word spread on the internet. In 2006, some Brisbane burghers were freaked out when a horde of zombies shambled down Adelaide Street at the same time as the official opening of the revamped King George Square. This was scheduled as part of the ‘Thrill the World’ zombie walk. Zombie Walk organizer Cara Westworth said at the time


"It looks great having all the zombies walk past City Hall. Hopefully they won't be too mad if we invade the place but it’s going to look great."

In 2011, the aim was to continue to raise in excess of $10,000 for the Brain Foundation and to officially break the Guinness World Record for the largest Zombie Walk attendance. The world record for the biggest zombie gathering was 4,093 ― set in the US city of Pittsburgh. In Brisbane, they stopped counting at 8,000, which made it – at least unofficially – the biggest Zombie Walk in the world.

Young Adult dystopian fiction and movies are currently very popular. One of my favourite science fiction short stories is the 1959 “ - All You Zombies - ” by Robert A. Heinlein. Maybe I’m showing my age, but whenever I think “ – All You Zombies - ” I’m reminded of the 1980s song by The Hooters.

“ - All You Zombies - ” tells the story of a young man who is taken back in time and tricked into impregnating his younger, female, self (before he underwent a sex change), and who turns out to be the offspring of that very union ― with the paradoxical result that he is both his own mother and father. In fact, as it turns out, all the major characters in the story are the same person at different stages of her/his life (they’re all Jane).


I know where I came from — but where did all you zombies come from?

I felt a headache coming on, but a headache powder is one thing I do not take. I did once—and you all went away.

So I crawled into bed and whistled out the light.

You aren’t really there at all. There isn’t anybody but me—Jane—here alone in the dark.

I miss you dreadfully!

It was recently announced that “ - All You Zombies - ” is to be filmed in Brisbane, by the science fiction thriller film makers Michael and Peter Spierig with the title Predestination. Queensland’s Spierig brothers previously directed in Ethan Hawke in the Australian vampire picture Daybreakers which grossed more than $50 million worldwide, $30 million of which came from North America.

Another Queensland author who has made a career of writing dystopian fiction is John Birmingham. Starting with his award winning He died with a falafel in his hand, and its sequel The Tasmanian Babes Fiasco, he documented the squalid life of sharehousing in Brisbane in the early 1990s. Oh, the horror!

Then, in the mid-2000’s, Birmingham wrote the excellent alternate reality, military science fiction series, the Axis of Time, where an early 21st century naval fleet is transported through a wormhole back to a few hours before the Battle of Midway in 1941. This series was followed up with another EOW, or ‘end of the world’ gig. In Without Warning. After America and Angels of Vengeance he poses the question: What would happen if America simply disappeared?


“...the days immediately before the Iraq War marked the turning point in popular imagination when sympathy for 9/11 evaporated and Europe especially regressed to their old way of dislike for the US.”

It’s at this moment in 2003 that Without Warning opens.

Birmingham’s post-apocalyptic novel is set in a world immediately after an energy field appears that rises miles into the sky and covers almost all of the forty-eight continental states, Canada, Mexico and Cuba like a thick blanket. All animal life, including humans trapped inside, are dead. In mere seconds, hundreds of millions of Americans, Canadians, Mexicans and Cubans are turned into smoking clothing. In one instant, all around the world, from Cairo to Canberra, things will never be the same. America, as we know it, is gone. . . .

But not all of America is gone. Here and there a city on the edge of the continent escapes the wipe-out. The only major American city to survive the carnage is Seattle. For America and its allies, Armageddon has arrived. The book follows several groups as they make their way in this new world, including portions of the military, an ex-war reporter working for the BBC, the Seattle city engineer, and a group of opportunistic pirates. Birmingham’s global nightmare shows the aftermath to what happens when the world’s superpower vanishes Without Warning.

The Without Warning series taps into the fears of socio-economic collapse and climate change that lie at the root of the modern survivalist movement. Birmingham’s novel, though, is a different spin on the post-apocalyptic survivor subgenre. George R. Stewart’s, Earth Abides (1949) dealt with one man who finds most of civilisation has been destroyed by a plague. Slowly, a small community forms around him as he struggles to start a new civilisation and preserve knowledge and learning.

John Wyndham’s, The Day of the Triffids (1951), tells the story of the survival of a small group of people in a post-apocalyptic world dominated by carnivorous plants. Wyndham’s novel was made into a BBC miniseries in 1981. It has a similar ‘comfortable holocaust’ feel as does the BBC TV series Survivors (1975-1977), where a small band of survivors emerge from a biological apocalypse to an almost comfortable rural ideal. Stephen King’s The Stand, published in the late 1970s, had a similar premise, where a flu pandemic wipes out 99.5% of the human population, but not as comfortable an existence for the survivors as they battle between supernatural forces of good and evil.

The Without Warning series has closer parallels to the Left Behind book series of the 1990s, where all Christians disappear in the ‘blink of an eye’ during the Rapture, leaving the sinners and non-believers left behind to try to survive the Tribulation. At least there are no rotting bodies to deal with. The Without Warning series is also a nice clean apocalypse. At least when all the dead bodies are vaporised, there’s no chance of them coming back as I am Legend zombies.

Birmingham has written a modern, even post-modern, alternate history where the people who wish America would go away get what they wished for. It is not a story about the survival of an individual here or there — virtually all of the population of an entire continent has been destroyed. The American survivors are the 5 million living outside the energy field. They are the new American Diaspora.So, what would happen if America vanished? Some would like to find out, but John Birmingham’s Without Warning series suggests that America would soon be sorely missed. It’s a gripping story, for Americans and non-Americans alike.

This all leads to possibly the best Australian colonial, time-travelling, survivalist, zombie story ever ― John Birmingham’s “Heere Be Monsters” published in the award-winning Jack Dann anthology, Dreaming Again. As the First Fleet approaches Sydney Cove, they pass through a strange storm and appear to be transported 500 years into the future. However, in the style of Birmingham’s previous Axis of Time series, a zombie infested Sydney has actually been inexplicably transported back to the founding days of the New South Wales colony. As the fleet enters Sydney Cove on 25 January 1788, they are confronted with the realisation that the decaying twenty-second century city has been taken over by zombies.

This futuristic zombie tale is delivered by Watkin Tench to the Royal Society, London to mark the twentieth anniversary of the discovery of the Scourge and echoes his famous diary. Birmingham has captured the essence of the eighteenth century through the language of Tench. Where Robert A. Heinlein’s zombies were the metaphorical dead or non-existent around him, in Birmingham’s “Heere be Monsters” the zombies were real and looking for ‘braaaains’.

Of course, the Zombie Walkers are not real and not looking for ‘brains’. But at 3pm, Sunday, 21 October the Brisbane Zombie Walk officially begins, finishing up with the ghastly festivities back at the Festival grounds. Deadhead party animals can rock out until 10pm at the Monster Mash and other Stages, where they are sure to find some musical bodies to sink their teeth into.