My mother always warned me about cartooning.

Now I'm not saying she was being mean, or anything like that. It's just that all the regular people she knew had jobs like being doctors or tradies or selling something or working in very large offices doing important things with filing cabinets and bits of paper, and the job of making silly drawings didn't seem to carry nearly as much gravitas.

There is also the matter that governments tend to attract the kinds of people who don't much like being laughed at.

And yet, here I am all these years later, and I draw cartoons that send up those very same appalling people. People who need to be held to scrutiny in any kind of self-respecting democracy. People who, and perhaps I am biased here, but I will say people who sure could do with a bit of laughing at sometimes.

I am very pleased to be working for Independent Australia. My exposure to that organisation reveals it to be run by fine people who appear to believe in the kinds of ideals that originally attracted me to journalism. Sure, we all like to send up journalists nowadays but we sure need them to know what's going on. And Independent Australia has some really good journalists.

Not only that but at a time when the newspapers weren't hiring, this mob gave me work.

Please prove my mother wrong by donating and subscribing to Independent Australia. 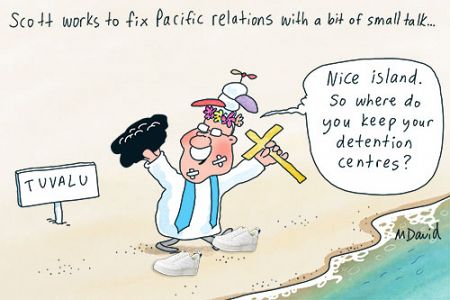 Independent Australia is about two-thirds of the way through our August Campaign.

Can you help us by making a small contribution today? Donate here.

Do it for my Mum!

CARTOONS: Voting for the cream of the crop — a tip

13 May 2022, 9:00am ... paying out on politicians who put themselves in the poo!
Join the conversation
comments powered by Disqus
News updates