Watch out for the Walking Dead

In the last few years, zombies have taken over post-apocalyptic fiction, TV and films from their evil dead vampire cousins. This weekend the zombie apocalypse takes over the streets of Brisbane writes Dr Glenn Davies.

It’s to be a big weekend for zombie fans in Australia. In the lead up to the much anticipated Season 4 premiere of the hit zombie TV show The Walking Deadto be aired around the world on Sunday, 13 October 2013, Australian genre fans will be launching books, holding conventions, and taking to the streets.

Today, Saturday, 5 October, Jason Fischer launched his post-apocalyptic and zombie related short fiction Everything is Graveyard at the SA Writers Centre. Within these covers, you will find murderous dropbears, zombie kangaroos and undead camels. Poignant endings to the world mash-up with muscle car battles, featuring feral killers that make Mad Max look like the Disney channel.

Also today, the inaugural 2013 Melbourne Zombie Convention at the Royal Melbourne Hotel will be on in all its shuffling glory.

Tomorrow, Sunday 6 October 2013, the Brisbane Zombie Walk will take to the streets to act out their Walking Dead fantasies at the RNA Showgrounds in Fortitude Valley.

A Zombie Walk is an organized public gathering of people who dress up in zombie costumes. The participants then make their way around the city streets and through shopping malls to a public space in a somewhat orderly fashion. Zombie Walks have become relatively common in large cities, especially in North America, often becoming annual traditions.

In modern popular culture, zombies are closely tied to the idea of a zombie apocalypse caused through the collapse of civilisation due to a vast plague of undead. The early Zombie Walk’s began in North America in 2001 and 2002. The mid to late 2000s saw an exponential gain in popularity for zombie walks due largely to the increase of successful zombie films at the time, such as the Resident Evil movies, 28 Days Later, Zack Snyder's Dawn of the Dead, Shaun of the Dead, George A. Romero's Land of the Dead, and Zombieland.

The annual Brisbane Zombie Walk began in 2004 with just 300 participants. By 2005, it had grown to 1,500 people as word spread on the internet. In 2006, some Brisbane burghers were freaked out when a horde of zombies shambled down Adelaide Street at the same time as the official opening of the revamped King George Square. This was scheduled as part of the ‘Thrill the World’ zombie walk.


"It looks great having all the zombies walk past City Hall. Hopefully they won't be too mad if we invade the place but it’s going to look great."

World records appear to be an important part of Zombie March’s around the world.

On 25 May 2008, Brisbane set an unofficial record with over 1,500 participants. In 2009, another unofficial record was set, with over 5,000 participants. In 2010, the Brisbane Zombie Walk attracted a staggering 10,000 participants to actively join in the walk and raised $13,000 for the Brain Foundation. In 2011, the aim was to continue to raise in excess of $10,000 for the Brain Foundation and to officially break the Guinness World Record for the largest Zombie Walk attendance.

The world record for the biggest zombie gathering was 4,093, set in the U.S. city of Pittsburgh. In Brisbane, they stopped counting at 8,000, which made it, at least unofficially, the biggest Zombie Walk in the world. 2012 saw the largest and the most successful Zombie Walk in the world with the event taking a whole new direction by an inclusion of a full music festival. As a result, over $55,000 for the Brain Foundation was raised. 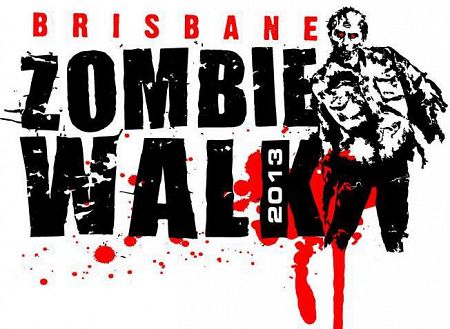 It just keeps getting bigger and bigger. 2013 is set to explode all previous records. Brisbane certainly seems to have embraced Zombie-ism. Indeed, even the stuffy shirts at Brisbane City Council appear to have accepted Brisbane’s zombie culture.

In November 2014, the G20 Summit is scheduled for Brisbane. During the summit, the Brisbane CBD will be locked down for security and in the lead-up many events may not be approved for security reasons. The Brisbane Zombie Walk organisers had initially been told by Queensland Police to “think long and hard” about holding the 2014 shuffle during the pre-G20 implementation period ahead of the gathering of world leaders in November next year. It was clear from both the organisers of the annual Zombie Walk – now 15,000 strong and a major charity fundraiser – and emails from police, that the 2014 festival of shuffling and moaning was not welcome in the inner city. However, Brisbane Lord Mayor Quirk recently changed his mind and affirmed his support for the event. The zombie tide can never be stopped.

So this year, the frightening world of freaks, ghouls, zombie clowns and undead mutants will be celebrated at the 'Carnival of the Dead', the theme for this year. So gather all your zombie friends, dress up in terrifying zombie costumes, cover your hands and faces in red paint and lurk the streets of Brisbane.

Of course, the Zombie Walkers are not real and not looking for ‘brains’ but the Zombie Walk starts at 3pm from the Showgrounds, you'll amble your way through the city and back again, where there will be some serious zombie partying where deadhead party animals can rock out and are sure to find some musical bodies to sink their teeth into. Be prepared to fist pump your rotting arms to such acts as Zombie Apocalypse Theory, The Bloodpoets, LeSuits and The Cassingles, till the conclusion of the event at 9pm. Tickets can be purchased here. See the website for more information.