Creating an Australian republic is a speculative project. To bring about change, you must first imagine the possibility of a different future. For over 200 years there have been Australians who have imagined what an Australian future might look like –and for them it was a republican future. The Third National Republican Short Story Competition challenges Australia’s fiction writers to speculate on the possible futures of the Australian republic. A great example of speculative fiction which explores themes of family and identity is Steven Amsterdam’s Things We Didn’t See Coming, writes Glenn Davies. 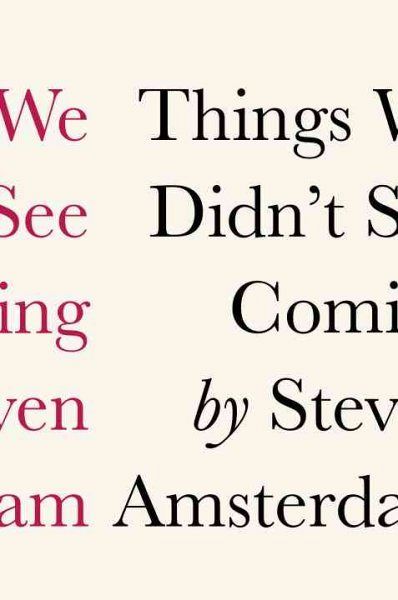 On 21 August 2009, an incredible coup occurred for small Melbourne publisher Sleepers and debut novelist Steven Amsterdam, when Sleepers’ first novel was announced as The Age Book of the Year Award for Fiction at the Melbourne Writers’ Festival

Things We Didn’t See Coming is a series of nine vignettes, from different stages of the unnamed narrator’s life in a dystopian alterno-present/future. The nine post-apocalyptic narratives are linked through the mind of one resourceful wanderer who always has one eye on the exit door and the other on the ever changing future. While the nine sections comprising the work can be read as discrete stories, they are enriched by points of convergence and a shared context. Amsterdam writes in a hard-boiled, yet highly resonant literary style. The sentences are sharp, the character is hard and the environment is one of rapid change and ruin — but throughout there is also deep resistance. He uses a minimalist writing style to great effect, creating powerful scenes that explore the emotional conflicts of a man at the various stages of his life. Though set in the future, Amsterdam’s well-crafted view of the world as it may have become merely acts as the backdrop for an intelligent exploration of the pursuit of happiness.

The central idea of the stories is family and identity. Amsterdam’s narrator engages in numerous acts of theft and destruction to try to work out who he is. Invented or stolen identities are the masks he wears to try to fit in. His father’s presence hangs over the book, forcing him to choose what sort of person he is. This makes for a fascinating and extremely readable collection that presents a dismal view of our future coupled with an intrinsic belief there is good to be found in almost all abysmal situations. As the survivors endure the physical conditions, it becomes a battle to understand what becomes of love, family, community and the individual will when even good people have to do wrong to go on living. At the end something very strange happens. Rather than a depressing trip through a variety of dystopias — foodless worlds; heartless periods of ceaseless rain and savagery; breakouts of peace and plenty marked by venality and ambition; biblical pestilence and illness — one puts down the book feeling something close to hope.

Things We Didn’t See Coming is about keeping your head in the midst of the aftermath of an apocalypse and how to make a decent life out of whatever’s left over. It’s about finding something to cling to when everything around you falls apart, and then finding a way to let go of even that. And it’s about accepting that it’s all going to end and striving to connect, to love and be loved anyway. Amsterdam seems to be saying that even though our attempts to change the world are hopeless, it is heartless not to try.

“Writing has long provided me with a place to put some of this energy. Indeed, many demons were exorcised (or maybe only exercised) when I wrote Things We Didn't See Coming”.


He argues that “the facts do not always portend the future” which is why he set the first chapter of the novel on the eve of Y2K. The narrator's father is practically manic with doom about the clocks turning over and having nowhere to go. By calling that chapter ''What We Know Now'' and focusing it on the panic before the fizzle, he underlines our never-ending ability to worry about the wrong thing.


The nine individual stories in Things We Didn’t See Coming are, by turns, horrific and beautiful, and the exploration of humanity at its most fractured and desolate is often moving, frequently surprising, and even blackly funny. Already parallels have been drawn between Amsterdam and Cormac McCarthy’s grim The Road. Amsterdam's vision is sunnier though than McCarthy’s. It seems the comparison can also be made with David Brin’s cautionary tale The Postman. Brin writes of the rekindling of hope in a post-apocalyptic United States through the efforts of a wanderer who struggles to stay a ‘good man’ in difficult times.

Things We Didn’t See Coming is sold in the United States as a short story collection whereas in Australia it is marketed as a novel with a discontinuous narrative. Amsterdam has even stated that he wrote the second chapter first. There are in essence nine moments in the narrator’s life which are visited at 4-6 year intervals. These are snapshots of the most important and relevant parts of the narrator’s life, without the boring bits. Each narrative is set in an unspecified place at uncertain times in our near future. Initially when I read the vignettes I thought the setting was meant to be post-apocalyptic Australia. Yet I had this uneasy sense that the author was off the mark with his description of the landscape. Later when I discovered Amsterdam’s US background I assumed he had not picked up on the nuances of eucalypts and sky. However the events were originally set in a post-apocalyptic United States but interestingly the editors at Sleepers went through the manuscript and ‘de-Americanised’ the text. This may have been done to tap into an international audience but if it was done to appeal more to an Australian audience then a sense of Australia does not seep from the pages. Things We Didn't See Coming looks at the world through the modern catastrophic lens and imagines a startling reality. Above all, Amsterdam creates real worlds and real people. None of the characters or scenarios seems farfetched, nor do they lack human emotion.

For Amsterdam the biggest discovery was that

“...what’s important for the narrator is not the government or the air or even his health; it’s who he can count on.”


In order to manage the post-apocalypse the narrator has to rely, for better or worse, on his companions. Worrying about dystopic systemic collapse, is not only futile, it's beside the point. Such thoughts are only a distraction from what guarantees our survival and what we need to hold close — other people. The challenge is now to take this revelation and use it. Perhaps sharing a new-found appreciation for the Here and Now with family and friends is a good place to start.

Things We Didn’t See Coming is a quite simply astounding book, and surely destined to become a contemporary classic.

(To find out about Steven Amsterdam and his work, check out http://stevenamsterdam.com.)