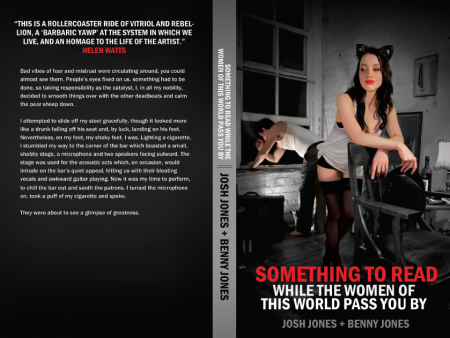 Now it was my time to perform, to chill the bar out and sooth the patrons. I turned the microphone on, took a puff of my cigarette and spoke.

They were about to see a glimpse of greatness.

Something to Read While the Women of this World Pass you by is the first literary outing from brothers Josh and Benny Jones. It is the story of a young would be artist ‘Sourires’ in his vain and desperate attempts to convince every character including himself that he can write his first novel. Living in the shadow of his already successful author brother Sourires floats between hazy drunken literary events, the shoeless world of hangovers and the violence of sex.

The Jones’ satirical narrative is intermittently punctuated by short prose, critiquing post-modern expectations of the blur between author and text. The effect is a critical reflection on the idea of the cult of the intellectual and the idealism of the artist as a creation of art they produce rather than a creator.

What really stood out for me was the outstanding character dialogue, which is slick and believable, written in a modern vernacular (yes, lots of swears) without becoming clichéd. The end result is interplay between characters that I readily lost myself in, a disturbing thing indeed considering the sordid world Sourires inhabits. Adding to that, the authors’ descriptive language is clean and honest — although the one sticking point is the active language is clunky at times and could certainly use a more critical eye to make the power of the prose strike out more readily from the page.

The story has a lot of grunt, and a lot of testosterone to burn, while there is also a reflective honesty that permeates through the first person narrative perspective that I found charming rather than repulsive. Although some minor changes would have strengthened the piece, Something to Read is certainly worth the effort and the ten dollars for perhaps a glimpse of greatness.

(The book ‘Something to Read While the Women of this World Pass You By’, by Josh Jones and Benny Jones is available here.)