This week, entertainment editor John Turnbull takes us for a look at a couple of sequels at the opposite ends of the ratings spectrum — the family friendly Smurfs 2 and the violent and profane Kick Ass 2. 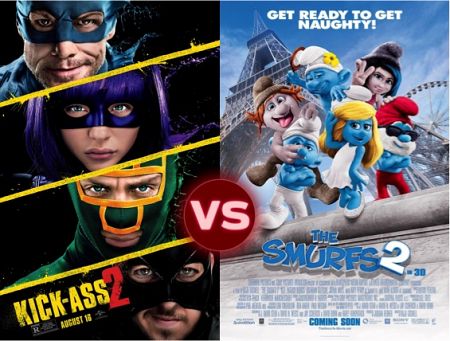 Released in 2010 and based on the graphic novel by Mark Millar, the original Kick Ass looked at what would happen if real people decided to become superheroes. Rising star Aaron Taylor Johnson played the titular character, while Chloe Grace Moretz played Hit Girl, one of the best examples of female empowerment in any comic book movie.

The big name in Kick Ass was Nic Cage, who chewed the scenery as Big Daddy with a vocal delivery inspired by Adam West, the original (and best) Batman. The rest of the cast was filled with virtual unknowns, with the exception of Christopher Mintz-Plasse, who had broken out as McLovin in Superbad.

Mintz-Plasse returns for Kick Ass 2, rechristened from hero Red Mist to supervillain The Motherfucker. The plot is driven for his desire for revenge on Kick Ass (and all other superheroes) for the death of his father.

In the time between films, Kick Ass has inspired a bunch of other people to don costumes and take to the streets, most notably Colonel Stars ‘n Stripes, played by Jim Carrey. While Carrey has since refused to do publicity for the film, citing the excessive violence (which he must have missed in the source material and the first film), he really seems to be enjoying himself in the role.

Darker in tone than the original, Kick Ass 2 has been accused of glorifying violence. While this may be true, the same could be said about almost any action or superhero movie; solutions to problems usually come from punching, shooting or blowing something up.

To be honest, you probably already know if you’re going to like this film. If you’re a fan of comic books who has ever wondered what it would be like to be Batman, Kick Ass 2 is the movie for you.

In case you missed the original Smurfs movie, here’s a quick recap. Smurfs come to earth for some reason, shenanigans ensue. Neil Patrick Harris does a pretty good job of looking like he wants to be there. The movie makes $563 million worldwide, studio executives fall over themselves to get a sequel in production.

Here we are, a scant two years later and Smurfs 2 is here. Yay?

Created by Belgian artist Peyo, the Smurfs have been around since 1958, which makes them the same age as Kevin Bacon. With names inspired by (or perhaps dictating) their temperaments, over 100 Smurfs have been created over the years — but only one of them has been female. Until now…

Smurfs 2 introduces two new characters, pale pseudo-Smurfs known as Naughties. Created by longtime nemesis Gargamel, the Naughties kidnap Smurfette and try to turn her to the dark side. Or something.

It is the mark of a great kids film when the content is engaging enough to keep the kids entertained, but clever enough that adult viewers have something to enjoy. Pixar tend to excel at this, with WALL-E, Up and the Toy Story trilogy setting new benchmarks for both animation and storytelling. If you don’t feel at least a little emotional at this scene in Toy Story 3, you need to check if you still have a pulse.

Unfortunately, Smurfs 2 is not one of those films.

It’s inoffensive enough and my four year old daughter loved it, but it lacks the wit and depth of the aforementioned classics. Hank Azaria chews scenery as Gargamel, Neil Patrick Harris once again runs around gamely and pretends he can see little blue people, while other human cast members Brendan Gleeson and Jayma Mays are also there.

The voice talent behind the Smurfs is well chosen, particularly The Daily Show’s John Oliver as Vanity Smurf and Paul Reubens (better known as Pee Wee Herman) as Jokey Smurf. Katy Perry does a serviceable job as Smurfette while Christina Ricci adds some attitude to new character Vexy.

Special mention must go to Azrael the cat, who was responsible for most of the adult laughs in the film and showed how genuinely evil cats can be.

Despite their different approaches, Kick Ass 2 and Smurfs 2 share a common theme — that it doesn’t matter where you come from, what matters is what you do. Smurfette learns that, even though she was created by Gargamel (spoiler), she can still be a good Smurf, while Hit-Girl learns that she can never be a normal teenager and is destined to be a superhero (or possibly a serial killer).

Both films portray strong female characters with solid story arcs, and while Kick Ass 2 is filled with wanton destruction, it still has more respect for human life than Man of Steel…