The charming Grand Theft Auto game is one of the most popular ever. Entertainment editor John Turnbull says its fifth incarnation is fun to play — though a pity about the torture. 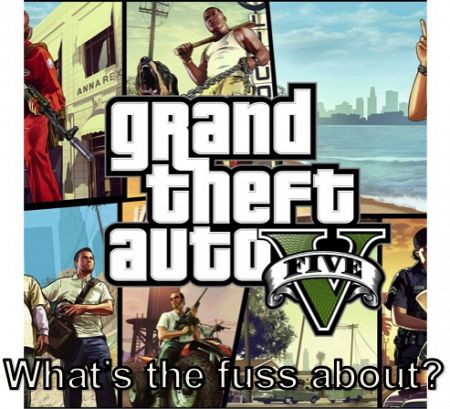 JUST UNDER A WEEK after release, Grand Theft Auto V racked up global sales in excess of $1 billion dollars.  By comparison, only 17 movies ever released have made over a billion dollars, none of them in a week.

For those readers who have never played Grand Theft Auto, the gameplay revolves around driving and committing various crimes for fun and profit. First released as a 2D top down side-scroller in 1997, the GTA series is no stranger to controversy. Blamed for an increase in gun crime, a growing indifference to violence and general malaise amongst disaffected youth, GTA has been a scapegoat for most of the ills of the world. Disbarred lawyer Jack Thompson (no, not that one) has filed multiple suits against developer Rockstar Games accusing the game of inspiring real life crimes. All of these suits have been dismissed.

The fifth official iteration of the game (actually around the 14th if you count all the spin offs) allows you to play as three lead characters, formerly retired professional crook Michael (think Tony Soprano played by Tom Sizemore), aspiring gangster Franklin and psychotic meth dealer Trevor.

It is the last of these characters who has caused the most controversy, involved as he is in drug dealing, wanton murder and torture.  That’s right, GTA V actually lets you waterboard, electrocute and practice amateur dentistry on someone. Admittedly, the person you’re torturing is not a nice guy, but it’s something that a lot of people won’t be able to get past. You can also get a lapdance, buy a medicinal marijuana dispensary or visit an adult cinema, but it’s the torture that most parental groups seem to find upsetting.

If you are able to get past the over-the-top carnage and random acts of violence, however, you’ll find an incredibly engaging game anchored around a well written story. It doesn’t take long before you become involved in the lives of each of your avatars, and the ability to switch between characters at will lets you play your favorite as much as you like (although you need to use all three to move the story forward).

GTA V is at times hilarious, frustrating and surprising. The R rating is well deserved, and should be well heeded by parents. This is not a game for children.

Verdict: 9/10 — possibly the best console game ever released. (Bit iffy about the torture, though.)