This week, entertainment editor John Turnbull dives into a pair of long running game franchises based on manly-yet-slightly-ridiculous pursuits — war and professional wrestling.

"Don’t you already have that game?" is a question that gamers have been hearing for years, usually around the time they buy the latest version of a popular franchise.

An early offender in this realm was stereotypical plumber Mario, making his first appearance in Donkey Kong back in 1981 and now responsible for over 200 games of various genres including platforming, racing and even golf.

These days, it’s not unusual for games (particularly sporting games) to release a new game every year featuring updated character rosters and slight tweaks in gameplay; popular franchises include FIFA, Madden NFL and NBA Live. While this is a good way to reach an audience already engaged with the product, one wonders – is it all a cynical cash grab?

War is hell. Video game war, on the other hand, can be quite entertaining.

First released back in 2003 on PC, Call of Duty started life as a WWII first person shooter, then evolved to include modern conflicts including Vietnam, Afghanistan and Russia. The Call of Duty: Modern Warfare series took place in the present and near-future, and new instalment Advanced Warfare takes another leap forward into a dystopian future reeling from the aftermath of a global terrorist attack.

Players take the role of Private Jack Mitchell (played by Troy Baker) who is gravely injured while fighting in North Korea, then rebuilt into a super-solider by the Blackwater-like Atlas Corporation. Still a first person shooter at heart, Advanced Warfare adds a few layers to the traditional run ‘n gun approach, including Star Wars style speeder bikes and drone assassination missions which are far more enjoyable than they should be.

While I have played previous games in the CoD series, I am far from an expert, which resulted in a very ‘Edge of Tomorrow’ experience for my first few hours of gameplay. Seriously — if this was a real war I would have died hundreds of times over. Fortunately, Advanced Warfare has a generous save system and a relatively short distance between save points, which means (for the most part) that you’re not playing long, complex sequences again and again, just to get killed at the same place because you can’t quite hit the bloke with the grenade launcher before he blows you up.

The gameplay in Advanced Warfare is frantic and exciting, but also very linear. Many missions have no room for improvisation, and this is the only area that the game really falls down, particularly in the vehicle sections where a single wrong move (like taking a turn too tightly) will result in a failed objective. This is far from a major issue, however, as the action is fantastic and the narrative progresses fast enough to keep the game engaging.

In terms of graphics, Advanced Warfare looks amazing. While the game is also available on the next generation systems, developer Sledgehammer Games certainly hasn’t skimped on the PS3 version. Textures are smooth, faces are realistic (even on non-playable characters) and the explosions and gun battles have a visceral quality more familiar to the cinema than the small screen.

Despite the engaging gameplay and cinematic graphic quality, the best thing about Advanced Warfare cam be defined in two words: Kevin Spacey. Playing Machiavellian Atlas boss Jonathon Irons, Spacey brings a sense of gravitas and importance to the game, making it well worth the effort to fight your way through over-run streets to reach the next cut scene.

Spacey plays Irons as a logical progression from his House of Cards character Frank Underwood, a man willing to make the hard decisions and take charge when governments are not up to the task. If Emmys were awarded for Video Game performances then Spacey would be a red-hot contender – it’s almost worth buying the game just for his performance.

Rating: 9/10 — a well written, well designed game starring one of the best actors of our generation. What more could you ask for?

When I was a younger man, I was a fan of professional wrestling. Not so much for the soap-opera or homoerotic elements, but more the spectacular athleticism and the potential risk that these athletes exposed themselves in the service of a predetermined result.  It didn’t matter who won the match, but rather the effort they put in and the story they told.

These days, I prefer to play wrestling video games, which allows me to skip the hours of ill-conceived skits and bad acting that accompanies the TV product. A year or so ago I reviewed the previous instalment in the WWE franchise, giving the game 7/10 for entertainment value and the historic 30 Years of Wrestlemania mode which allowed me to relive the classic matches of my childhood.

Now developers Yukes and 2K have released WW2K15, and unless you’re a hardcore fan, there isn’t really much to write home about…

From a design and gameplay point of view, there are almost no changes to WW2K15 from the previous iteration. What’s more, the fact that the game has been developed for next generation systems PS4 and X-Box One seems to have left previous generation owners out in the cold — most of the cool new stuff has been limited to the next-gen releases.

There are two main storylines that players must complete to unlock additional wrestlers and arenas, each following a great rivalry of the past. The first of these is Hustle, Loyalty, Disrespect, which chronicles the rivalry between indie superstar CM Punk and company man John Cena. The second storyline concerns the longtime feud between real life friends Shawn Michaels and Triple H. The main problem with this approach is that you end up playing different versions of the same match repeatedly, which just isn’t that interesting.

The one concession to PS3 players is the inclusion of the Got NXT? mode, which allows players to take control over five young athletes featured on the developmental NXT program – including the unfortunate Corey Graves who was forced into an early retirement due to frequent concussions before the game was even released. This mode is fun but limited, with only four matches per character to complete to unlock that particular wrestler.

The real appeal of WW2K15 lies in the updated roster of ‘superstars’, featuring a total of 17 who weren’t included in last year’s release. Fanboy highlights include Stone Cold Steve Austin, Sami Zayn,  and CM Punk, despite the latter walking out of WWE in disgust in early 2014. By the same token, popular characters from last year including Andre the Giant, Goldberg and King Kong Bundy have disappeared, which makes you wonder — does anyone really want to play as Fandango?

Due to the hazardous nature of professional wrestling and the hotbed of politics that is the WWE, WW2K15 also features a number of wrestlers who have either had to retire due to injury or have been released — you’re unlikely to see any of the gentlemen below on your TV screens any time soon… 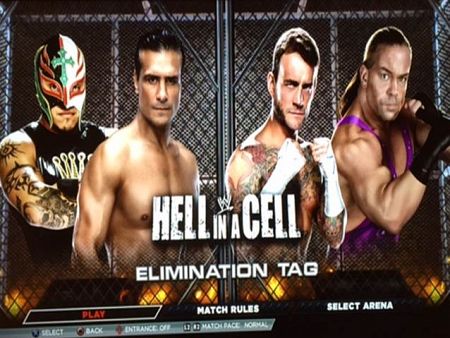 A warning for owners of systems with limited memory – WW2K15 takes up a ridiculous amount of storage space. Where previous games in the series have taken around 1 gig, this one took up a massive 8 gig of space, which makes the cheap deals available on 12 gig PS3s look not quite as attractive as they might initially appear. Why does essentially the same game take up 8 times the amount of space? I have no idea, and when I put the question to the 2K support team, tumbleweeds were the only reply…

If this were a wrestling match, it would be the Undertaker vs Santino Marella.

CoD: Advanced Warfare is one of the best games I’ve played on the PS3, pushing both gameplay and graphics to the limits of the aging hardware. WW2K15 on the other hand is a lazy re-hash with ugly character models and poor collision detection.

If you only buy one game this year, make it Call of Duty: Advanced Warfare.