This week, entertainment editor John Turnbull is checking out new albums by the hard drinking Kings of Leon, the newly stylish Arctic Monkeys and the implausibly large Polyphonic Spree. 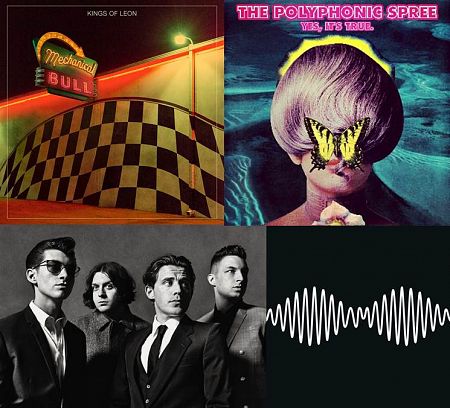 New Album by an Artist getting Older

Kings of Leon are one of those bands who have grown up in the spotlight, releasing their first album Youth and Young Manhood, when most of the band were barely twenty. Led by brothers Caleb, Nathan and Jared Followill, along with their cousin Matthew, the group rebelled against their religious upbringing and released an album of dirty Southern rock. Singles Wasted Time and Molly’s Chamber reeked of lust, sweat and bourbon, and the band did their best to live up to this image, partying their way across the US, then the world.

The next few years were a blur of alcohol, groupies and hotel rooms and, in 2004, the band released second album Aha Shake Heartbreak.  While this album attracted praise from luminaries such as Elvis Costello and Bob Dylan, it failed to set the world on fire commercially. After a couple more years on the road, Kings of Leon released two albums almost back to back — 2007’s Because of the Times and 2008’s Only By The Night.

This fourth album showed significant development in both songwriting and musicianship, and spawned the monster – if nonsensical – single Sex on Fire. Follow up singles Use Somebody and Revelry also performed well on the International charts and suddenly Kings of Leon were one of the biggest bands in the world. Naturally, this is when everything started to fall apart…

The band headlined Glastonbury and played the main stage at Lollapalooza the same year. They appeared on talk shows, did endless interviews – often while hammered – and generally had a good time, all of the time. As anyone over the age of 25 knows, this kind of behavior can’t last forever.

On stage in Dallas in 2011, Caleb was so heavily intoxicated he was unable to complete the gig, which must have gone down well in a laid-back place like Texas. Shortly after that, the band went on hiatus, which some people predicted would be the last we saw of Kings of Leon.

Fortunately, those negative nellies were wrong. It’s 2013 and Kings of Leon are back with Mechanical Bull, something of a return to form. First single, Supersoaker, is a slow burner and doesn’t seem to have anything to do with water pistols, which is a little disappointing really. It’s still a decent song, though, with a distinct grow-on-you vibe.

Follow up, Wait For Me, is dark and evocative, but seems to be missing a hook. You can tell that a bit of effort has gone into the songwriting and Caleb’s vocal range seems to have improved since he cut down to seven bottles of bourbon per day.

Some of the lyrics are a little repetitive (like Don’t Matter) but the Kings have always been more about the groove than the meaning. The scent of grain alcohol runs strongly through the album, but most of the time the band seem to keep it together. Bonus track Work on Me has a distinct Springsteen feel, while Family Tree rocks a funky beat that would feel at home on a Sly and the Family Stone album.

Sample lyric: ‘I take one in the temple, I take one for you.’ (Temple)

Verdict: 7/10 — significantly better than I thought it would be.

New Album by a Still Quite Young Artist

Taste is a personal thing, as my good friend (and Bizarro-world wife) Erikka often reminds me. A song I might find catchy might ring hollow in your ears, while your favourite track might sound like The Wiggles to me. The Arctic Monkeys are a good example of this.

One of the most polarising bands of this generation, Arctic Monkeys are one of those groups that some people really love to hate. ‘Alex Turner can’t sing!’ they’ll say. ‘All of their songs sound the same!’ they’ll point out. ‘They’re always so fucking whiny!’ they’ll whine.

While they may or may not have a point, these hypothetical critics would have to admit that Arctic Monkeys have passed the test of time, recently releasing their fifth studio album AM. Seven years after their debut smash Whatever People Say I Am, That’s What I’m Not in 2006, AM shows a band that have grown up in the spotlight and avoided falling into a big drunken heap like their contemporaries in Kings of Leon.

On top of that, Alex and the boys have updated their style, losing the shaggy haircuts and cardigans for rocker coifs, tight pants and leather jackets. You can’t blame them for wanting to look a bit different, but Alex Turner’s increasing resemblance to Brit-pop godfather Paul Weller is remarkable.

As an album, AM continues to build on the Monkey’s previous work, chronicling the lives and loves of the British working class. The fact that all of the band members are now millionaires hasn’t reduced their ability to spin a convincing tale of teenaged heartache followed by a quick shag next to the bins in the alley behind the pub.

First single R U Mine? is apparently influenced by Drake and Lil Wayne, but you really need to listen hard to hear their influence. Follow up Do I Wanna Know? has a nice garage rock stomp, with surprisingly melodic backing vocals, suggesting the Monkeys have spent a bit of time developing their vocal chops. Nice work, boys!

Overall, AM is a really solid album, with variety from track to track and a strong musical proficiency throughout. Josh Homme contributes to two tracks, the Stones influenced One For The Road and Knee Socks — both very catchy tunes.

Best tracks: Do I Wanna Know?, One For The Road, Knee Socks

Sample lyric: ‘The good time girl, the cubicles, the house of fun, the number one party anthem.’ (No.1 Party Anthem)

Almost every single article I’ve ever read about the Polyphonic Spree starts out with what a big band it is, and how could they possibly afford to pay that many musicians. I shall try to avoid this trope, instead questioning the wisdom in releasing an album with catchy song titles like Section 35, Section 38 and, my personal favourite, Section 41.

True, these songs do have subtitles, but I’ll be damned if I’m going to start referring to songs by their subtitle. The Ramones released Blitzkrieg Bop, not Hey Ho, Let’s Go. The Stones track is called Satisfaction — the I Can’t Get No is implied. And let’s face it, who on Earth refers to the Slight Return in this Hendrix classic?

It turns out, the esoteric song titles are symptoms of a bigger problem, which relates inextricably to the ridiculous number of members in the Polyphonic Spree. Commonly featuring between 20 and 24 musicians who perform in white robes, the band is led by oddball Tim DeLaughter, who apparently grew up wanting to be Jesus but became a musician instead. Coming across like a slightly cuddlier version of David Koresh, DeLaughter used to be in a hippy band called Tripping Daisy until guitarist Wes Berggren died of a drug overdose in 1999.

The band released their first album “The Beginning Stages Of…” in 2012, and were dropped by their record label due to poor sales the following year. After this inauspicious start, momentum started to build with Polyphonic Spree songs featuring on the TV show Scrubs, a TV commercial for Volkswagen and the soundtrack to the film Eternal Sunshine of the Spotless Mind. This led the song Light and Day/Reach for the Sun to the dubious honour of being the most used song for advertising in the UK.

While the music is quirky, well-written and popular, the main problem with being in a band with twenty plus members seems to be touring. Where a two-piece like the Black Keys can split the concert money between them and go out for steak, The Polyphonic Spree split their receipts twenty four ways and end up eating half a Mars bar they found down the back of the sofa.

The other side of the massive roster is the question: what do they all actually do? A quick look at the Polyphonic Spree website doesn’t offer much insight and suggests there might be only 16 people in the band at the moment, which certainly must make it easier deciding who gets to sit in the front seat of the combi.

Our old friend Wikipedia lists 20 current members, six of whom are in the Choir. Other instruments include at least three guitars (still not as many as The Eagles), bass, trombone, French horn, mandolin, cello, keyboards, percussion and drums. Oddly enough, you really can’t hear this many people in the music.

Perhaps modern production techniques have taken away my appreciation for a true ensemble but, without watching the videos, I’d have no idea that I was listening to a band the size of a football team including reserves and water boy. While it’s great to have two dozen people in matching robes in your video, most of the tracks on Yes, It’s True could have been produced by a talented four piece with an overdubbing machine.

This is not to say it’s a bad album – far from it – more that Tim DeLaughter might need to reconsider his business model. If you sound like a four piece band, do you really need to keep a choir on staff?

Verdict: 8/10 — interesting music, with an in-built conversation starter. What more could you want?