New Music through Old Ears: Iggy and the Flaming Lion

This week, John Turnbull brings us a new album by some veteran space rockers, a potential return to form for the godfather of punk, and a musical reinvention worthy of Bowie himself — Snoop goes Reggae!

(Due to extensive reader feedback, this column will continue to review new albums by very old artists and eagerly awaits new material from Yes and King Crimson.) 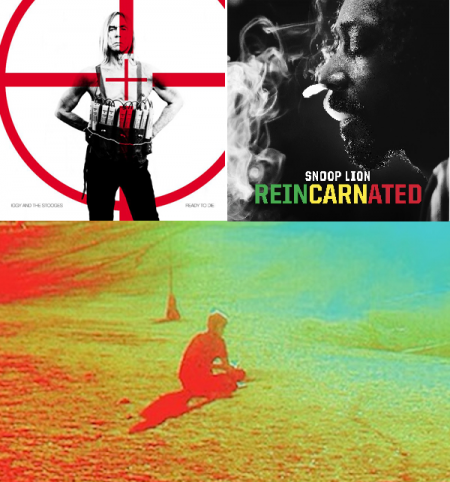 Iggy & the Stooges — Ready to Die

Iggy and the Stooges formed in 1967 and broke up in 1974. While their albums didn’t sell particularly well on first release, they were hugely influential in the development of punk and rock music, with classics like I Wanna Be Your Dog and Search and Destroy. For the next few years, Iggy went solo and partied pretty hard, becoming something of an icon to fans of musicians who could handle their drugs without dropping dead (see Richards, Keith and Kilminster, Lemmy).

During this period, Iggy released a number of hits including The Passenger and Real Wild Child, but his most enduring song would probably be Lust For Life, which most people know best as the opening song in Trainspotting.

The Stooges reformed in 2003, despite the fact that Iggy had said some rather uncomplimentary things about the rest of the band (particularly the founding Asheton brothers) over the years. They released an album called The Weirdness in 2007, which received a poor 1.0 rating by the hipster douchebags over at Pitchfork.

While it could be fairly said that The Weirdness didn’t set the world on fire, that doesn’t mean that follow-up album Ready to Die is rubbish, does it? Unfortunately ... it sort of does.

While not a terrible album by any means, Ready to Die hints at greatness but ultimately fails to deliver. There are a few good rockers, but someone really needs to tell Iggy that ballads aren’t his thing. Opening track Burn is classic Stooges, with a simple chord structure and rolling stomp, but it’s with second track Sex and Money that problems start to emerge.

The lyrics are inane, to say the least. Choruses are repeated ad nauseam (Job), and double entendre isn’t necessary when single entendre will do (DDs). With riffs stolen from tracks they wrote forty years ago, there really isn’t anything new to listen to here.

But at least Iggy still has a sense of humour...

Sample lyric: I’m on my knees for those double D’s, why tell a lie, I’m mystified. (DDs)

Verdict: 5/10  A couple of decent tracks. Not really enough to make a full album, though.


New Album by an Old Artist

The Flaming Lips – The Terror

The last time I listened to The Flaming Lips was in 2002. The album was Yoshimi vs The Pink Robots, and I was going through what you might call an experimental phase (read into that what you will). The album was... odd. It’s not a concept album, but there are certainly a lot of concepts floating around. Pacifism, Egotism, giant pink robots — it was all very deep. The album had a couple of catchy tracks, and one melody that owed so much to the Cat Stevens (or Yusuf Islam if you prefer) song Father to Son that good old Cat still receives royalties for it.

The Flaming Lips are led by Wayne Coyne, an eccentic genius who traverses audiences in a bubble and has a penchant for the psychadelic, both in music and in substance.  The band had a medium sized hit in 1993 (that brief period when grunge ruled the world and record execs got excited by anyone with a detuned guitar and orange hair), the weird-but-normal-for-them She Don’t Use Jelly.

Between then and now they’ve released a bunch of albums, changed lineup, toured the world, changed line-up, and matured into elder statesmen of alternative rock. Well, sort of. They did do an interview with Forbes magazine about the creative process for this album...

New album, The Terror takes a while to get going. So long, in fact, that the album finishes before the ‘gets going’ actually happens. Apart from brief flashes of inspiration, the songs blend into one another and then into the background noise of the universe. Despite the abundance of bleeps and bloops and weirdness for its own sake, overall, the album is staggeringly dull.

It was almost inevitable that the artist formerly known as Snoop Dogg would eventually discover reggae music, and its parent ‘religion’ Rastafari. Considering Snoop’s legendary consumption of the evil weed, it’s either surprising or completely predictable that it took him this long.

The artist formerly known as Snoop Dogg, Snoop Doggy Dogg and briefly as Calvin Broadus would now like you to call him Snoop Lion, if you don’t mind. Much like Puff Daddy reinventing himself as P. Diddy, this change comes off the back of a life changing experience. Unlike Puffy, Snoop had his new name bestowed upon him by one of Bob Marley’s backup band, which makes it infinitely cooler. This all happened on Snoop’s trip to Jamaica, where he and Bunny Wailer (possibly not his real name) smoked about a bale of weed before Bunny decided that Snoop needed to be reborn into the Rastafari religion.

Of course, this meant that Snoop had to record a reggae album. Never mind the fact that reggae hasn’t been cool since long before Bob Marley died (except among Jamaicans and a certain subset of potheads) Snoop was confident that he was up for the challenge.

That was the new single, No Guns Allowed. While the anti-gun message is admirable, do you really want to go back and listen to the song again? Maybe if you could cut out Drake’s rapping, it might be a bit better, but as a song it’s just fairly... unremarkable.

Second single, Here Comes the King isn’t much better, despite referencing classic reggae beats like one religion, one love and a general sense of peace and grooviness for all. For the first minute or so of first single La La La, I was convinced that it was a Saturday Night Live skit. Then it kept going.

It’s not that I dislike Snoop, whatever he chooses to call himself. He seems like a cool guy and, if you believe his reality show, he’s also a pretty good father. His music just does very little for me. I mean, I can sort of appreciate the contribution he made to Dr Dre’s landmark album The Chronic, and I liked Drop It Like It’s Hot before it became a snack food commercial, but overall it’s just... not for me.

If you really like this album it is accompanied by a documentary of the same name, which some people seem to like.