It’s musical genre soup this week, with entertainment editor John Turnbull serving up a hearty base of classic Metal, the spice of some Jazz Fusion and the white bread of Country on the side. Also featuring the triumphant return the enigma once known as Hootie. 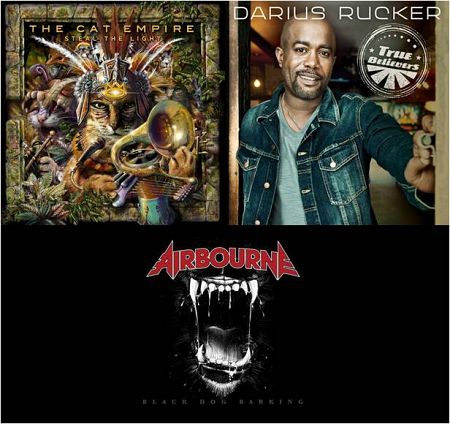 New Album by a Newish Artist

When Airbourne burst onto the Australian music scene in 2007, it was like AC/DC were born again. And I don’t mean the tired old AC/DC that have released the same album every couple of years since the mid-Nineties; I mean a young, hungry, AC/DC who were born to rock and fuck anybody who gets in their way.

Forged in the tiny town of Warnambool in Victoria, Airbourne’s first album was called Runnin’ Wild, and contained suitably rocking singles including Too Much, Too Young, Too Fast, and the awesome title track featuring Lemmy from Motorhead in the video:

Follow up release No Guts, No Glory was more of the same four-on-the-floor hard rock, but didn’t really build on the potential shown by the first album. As evidenced by single No Way But The Hard Way, Airbourne loved to rock, and they weren’t afraid to tell you about it. Over and over again.

Still, a few years have passed, and even mountains change over long enough periods, right? Have Airbourne have built on their potential and become the true rock megastars that so many predicted that they would?

They’re still making decent rock ‘n roll, heavily influenced by AC/DC but with a bit of Aerosmith and Led Zeppelin thrown in. Unfortunately, a lot of the songs sound almost exactly the same, and the lyrical range of rock, roll, chicks and beer isn’t exactly inspired.

Still, it does what it says on the box. Rock ‘n Roll, baby!

Best tracks: Live It Up, Cradle to the Grave

Sample lyric: ‘From the cradle to the grave, I will never be a slave.’  (Cradle to the Grave)

Verdict: 6/10 — still better than anything AC/DC have released lately.


New Album by an old Artist

The Cat Empire — Steal the Light

For many years, hardcore fans of The Cat Empire insisted that the only way to see the band was live — preferably in a small venue with a few hundred people. Their albums are good, they would tell you, but they’re a pale imitation of the live shows.

Having seen The Cat Empire live a few years ago, I can attest to the fact that they’re very entertaining, but I would suggest that the hardcore fans might be doing the band a disservice by damning their albums with faint praise. Their sound is Jazz / Rock fusion infused with funk, samba and ska, and their lyrics tend to be witty with a sideline of political activism.

Since their self titled debut album back in 2003 spawned the single Hello, The Cat Empire have released an album every few years and toured relentlessly, leading to their aforementioned reputation as an awesome live act. They also released the haunting No Longer There in 2007, from the album So Many Nights:

The use of dual vocalists has always given The Cat Empire a distinctive sound, and Steal The Light combines singer/percussionist Felix Riebl and singer/trumpeter Harry James Angus to great effect. Go is a perfect example of this, with Harry providing lead vocals and circus trumpet, while Felix provides harmonies and adds a layer of passion on the acerbic chorus.

With a couple of exceptions, this is fun music ... and The Cat Empire know how to have fun. Influences are diverse, from Latin to Reggae. Wild Animals owes a debt to Toto, but is all the better for it.

Steal The Light is the sound of a band in mid-life, marked by the inevitable ‘life on the road’ song. Inspired by Bob Seger’s Turn The Page (covered well by Metallica), and to a lesser extent Every Rose Has It’s Thorn by Poison, All Night Loud charts a young band’s rise to fame and the inevitable pressure and sacrifices that come with it.

Sample lyric: ‘You’re just standing there and staring at some message on your omnipresent phone, you’re so goddam materialistic, man you’ve got to let it go’ (Go)

Darius Rucker used to be in a little band called Hootie and the Blowfish. Along with the Dave Matthews Band, Hootie led the mid-nineties Middle of the Road renaissance, where tens of thousands of people would pack out arenas to watch to a bunch of blokes who looked like accountants sing cookie-cutter songs about love and loss.

All good things must come to an end, and Hootie and the Blowfish went on ‘hiatus’ back in 2008 so that lead singer Darius Rucker could focus on his country music career. He released an album called Learn to Live the same year, which included three singles that topped the Billboard Hot Country Songs chart – Don’t Think I Don’t Think About It, It Won’t Be Like This For Long, and Alright.

Follow up album Charleston, SC 1966 was released in 2010. It was more of the same easy listening Country ‘n Western, touching on all of the usual County music tropes — cheating women, mining disasters and how great America is.

I will take a second here to confess that I generally don’t care for Country music, except for Kenny Rogers, who is really sort of Metal.

Back to the artist never actually known as Hootie; new album True Believers does little to reinvent the wheel. Lead single Wagon Wheel is case in point; featuring cringe-worthy lyrics and a film clip that longs for the good old days of the Depression, I wonder if anyone but the most staunch country fan can appreciate this un-ironically...

There is nothing intrinsically wrong with True Believers, but to my ears it sounds like every other country album ever released. Song titles like Your Cheatin’ Heart and Take Me Home promise true tales of woe, and Rucker does not fail to deliver. If all of the stories on this album are about him, Darius Rucker has had a very sad life (and was once a woman, apparently).

Highlights (and I used the term advisedly) include a cover of Hootie favourite Only Wanna Be With You and Love Without You, a duet with Sheryl Crow.

Sample lyric: 'Rock me mamma like a wagon wheel, rock me mamma any way you feel.' (Wagon Wheel)