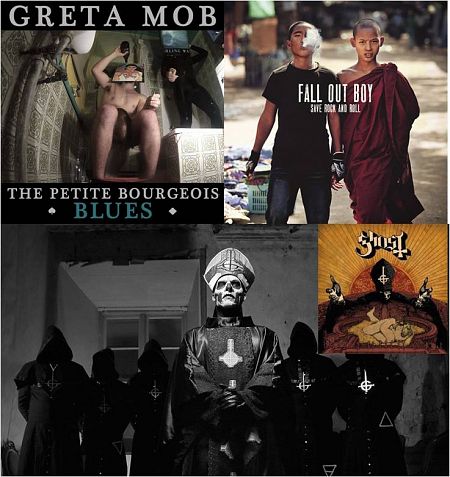 New Album by a New Artist

Ghost are a heavy metal band from Sweden with a distinct fondness for the theatrical.  Led by satanic priest Papa Emeritus II, the band is completed by five hooded, masked musicians known as the Nameless Ghouls. Makes it easy to replace band members who want to explore new musical directions I spose?

Their unique look put them on the cover of every heavy metal magazine in the world, and an extended tour around the world followed.  Fast forward to 2013 and Ghost have released their second album, the near unpronoucable Infestissumam.

While they are certainly a metal band, the variation in musical styles evident on Infestissumam suggests a far broader appeal than the black metal classification would imply. There are song styles ranging from orchestral metal to power pop.

Known as Ghost BC in the US due to copyright issues, Ghost follow a path paved by artists like KISS, Alice Cooper and Rammstein with an instantly recognisable look and deliberately provocative lyrics.

Much like Marilyn Manson, the costumes, satanic lyrics and on stage shenanigans seem designed to satirise rather than truly offend, and it’s hard not to laugh out loud at songs like Year Zero.

I would recommend this album to anyone who has ever raised the metal horns at an inappropriate moment, like at a wedding. If you think this is funny, chances are you’ll love Ghost.

Verdict:  8/10 – Entertaining and surprising. Worth a listen just to see if you’re offended.

New Single by a new Artist

Up until last week I had never heard of Greta Mob. I'm glad that this is no longer the case. A punk rock quartet formed in Wangaratta but currently based in Sydney, Greta Mob are proof that punk really isn’t dead.

Discovered by Triple J Unearthed, Greta Mob play original punk rock with passion, commitment and attitude. This isn’t a simple rehashing of the best of the Ramones, but a conscious attempt at creating fresh sounds inspired by the DIY punk ethos.

A side note on Unearthed – it’s nice that a talent search with credibility still exists to counterpoint the proliferation of glorified karaoke competitions that besmirch our TV screens. Idol, Voice, Australia's Got Talent – I’m looking at you.

Here's a clip of Greta Mob performing The Vengeful Nardonik at the legendary Annendale Hotel.

While the sound quality of this recording isn’t ideal, in my experience punk bands are best enjoyed in a dark, overcrowded venue with overpriced beer and like-minded fans.

If you live in Sydney, you can go and see the Greta Mob live, which I wager would at least be a good impersonation of the authentic punk* experience.

New single The Petite Bourgeois Blues is a proper barn-stomper, rocking out with classic rock hints of Led Zeppelin flavoured with the deliberate anonymity of TISM. In an interesting approach, Greta Mob seem to follow a ‘substance over style’ approach uncommon to most contemporary artists.

Greta Mob are definitely a band to watch – so get out there and watch them!

They’re also giving away the single free on Bandcamp, so even if you’re a cheap bastard there’s no reason not to check them out.

*Authentic punks will of course be unimpressed

All right, I admit this is low hanging fruit.  Fall Out Boy are one of those bands that it’s cool to hate, so I’d like to be able to tell you that this album defies expectations by being totally awesome.

Unfortunately, I cannot say that. Suffice to say that I acquired this album a few weeks ago, listened to it once and haven’t worked up the enthusiasm to review it until now.

Back in the early days of this column I reviewed the first single My Songs Know What You Did In the Dark (Light ‘em Up). I awarded the song 4/10, a rating which in retrospect I think was a little generous.

The music videos from this album tell an ongoing story that I can’t quite bring myself to watch. It started off with the aforementioned Light ‘em Up, then into second single The Phoenix, and finally Young Volcanoes and Alone Together. Kudos to any reader who can be bothered to watch all four videos and post in the comments what the hell is going on...

While Fall Out Boy may have matured (or at least got older), their songwriting skills do not seem to have grown with them.  Lyrics generally fall into the "look how clever I am" category, and song themes seem to be limited to the interests of adolescent boys.

There is a distinct lack of originality on Save The World. Just One Yesterday (featuring Foxes) bears a striking similarity to Adele’s Rolling in the Deep, and while FOB have inspired a number of lesser copycats like Panic! At The Disco, at this point they sound like a poor imitation of themselves.

Guest stars as diverse and contemporary as Elton John and Courtney Love do their best to prop up this lackluster album, but their past-their-prime efforts are for naught.

Do Fall Out Boy Save Rock ‘n Roll? No. No they do not.

Best tracks: Young Volcanoes, Rat A Tat (if only to hear how sweetly Courtney Love sings these days)

Sample lyric: ‘I’m gonna change you like a remix, then I’ll raise you like a phoenix.’ (The Phoenix)