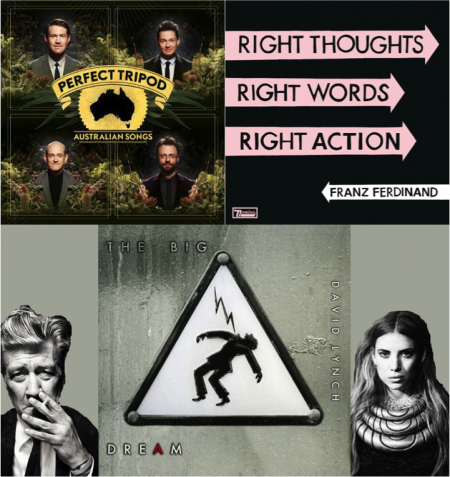 A team-up between comedy act Tripod and Eddie Perfect from Offspring (the TV show not the band), Australian Songs features A cappella versions of classic Aussie songs, from Gotye’s Heart’s a Mess to John Farnham’s You’re The Voice.

It’s a little odd, to say the least.

The collaboration started when Perfect and Tripod got together on the track Middle of the Air to honour singer/songwriter/Australian treasure Paul Kelly. The track is a beautiful rendition of a well written song, the enjoyment of which will be in direct correlation with your ability to enjoy/tolerate a cappella music.

Originating in religious singing tradition, such as Gregorian Chants, a cappella (Italian ‘in the manner of the chapel’) is solo or group singing without instruments, a minor fact which seems to be lost on current chart topper Karmin. Other styles of a cappella include Barbershop, Beatboxing and Glee – and who could forget this classic by Bobby McFerrin?

After meeting at university in Melbourne and getting a boost from Hey Hey, It’s Saturday, Tripod started a career of musical comedy that is still going strong almost fifteen years later. Classic tracks include gamers apology Gonna Make You Happy, I Hate Your Family and a smile-inducing version of Neil Diamond’s Sweet Caroline.

Many people know Eddie Perfect as Mick out of Offspring, but he built a reputation as a political comic and composer. He appeared in Keating! The Musical in 2007 to rave reviews and then went on to write, produce and star in Shane Warne: The Musical the following year.

Australian Songs features a diverse mix of classic Oz rock tracks — some of which work better than others in the a cappella format. Errol by Australian Crawl fares well, as does the Bee Gees' How Deep is Your Love. Less successful are Overkill by Men at Work and You’re The Voice by Mr John Farnham — you'll find the backbeat of Johnny Farnham chanted over and over gets old quickly.

If you’re interested in the creative process, you can find a mini-documentary on YouTube; they all seem to be having a good time, which is nice.

Best tracks: Errol, The One, How Deep is Your Love, Forever Now


New Album by a Resurgent Artist

You might remember Franz Ferdinand as the Archduke of Austria, whose assassination was one of the key causes of the First World War. This is not that Franz Ferdinand, although I’m told he had a lovely singing voice.

No, this is the other Franz Ferdinand, the Scottish band who had a massive hit a few years ago with Take Me Out, which was number one both on the Triple J Hottest 100 and around the world. Follow up album You Could Have It So Much Better contained a bunch of songs that all sounded a bit like Take Me Out and was a moderate success.

Released in 2009, third long player Tonight: Franz Ferdinand defined the third album slump, damned with the faint praise that it was ‘big in Japan’. The band spent the next three years working on their follow up, which was eventually to become Right Thoughts, Right Words, Right Actions.

The resulting album was worth the effort. The songs are tight and hooky, sounding like Franz Ferdinand without repeating anything they’ve done in the past. Love Illumination sounds like the White Stripes before busting into a bouncing guitar line and catchy pop chorus, and a reworked version of Ulysses from Tonight benefits from a few years of musical maturity.

Released in multiple formats to cater for every taste and purchase channel, Right Thoughts is a return to form from a band that showed infinite promise, then spent the next half dozen years pissing about and generally having a good time. You can’t begrudge a band that period of development, but it’s always a good thing when they move on to the next musical phase...

Sample lyric: ‘We will soon be rotten, we will all be forgotten.’ (Fresh Strawberries)

David Lynch is the director of dark and surrealist films including Eraserhead, The Elephant Man and Mulholland Drive and the TV series Twin Peaks.

Film buffs wondering whether Lynch’s musical sensibility is as weird as his cinematic vision will be happy to find out that, yep, it is.

Lynch has always been closely involved with the soundtracks of his films and he wrote a few songs for Julee Cruise, who returned the favour by contributing Falling, the theme song to Twin Peaks.

I’ll be honest with you, David Lynch does not have a good voice. It’s a bit too whiny, a little too nasal. He also doesn’t seem to be putting a huge amount of effort into his singing performance, giving the general impression that he might have recorded the entire album in his pyjamas.

Lyrics are dark and opaque, alluding to loss, depression and desolation. Individual tracks do little to distinguish themselves from each other, so reviewing becomes a matter of looking at the track listing and wondering vaguely about the point of it all...

Best tracks: The Ballad of Hollis Brown (chosen at random, if I’m being honest. It sounds like all the other songs)

Sample lyric: ‘Stand up and be a mountain, power of a dream.’ (Are You Sure)

Verdict: 1/10 — suitable only for pretentious wankers who want to say things like: "Oh, you like Inland Empire? Lynch totally carries the subtext of that film through this entire album..."