Responding to reader feedback from musical tastemaker Matt C, entertainment editor John Turnbull reviews new albums from a lead singer who has replaced most of his band, a band that replaced their lead singer and two grown men in robot helmets. 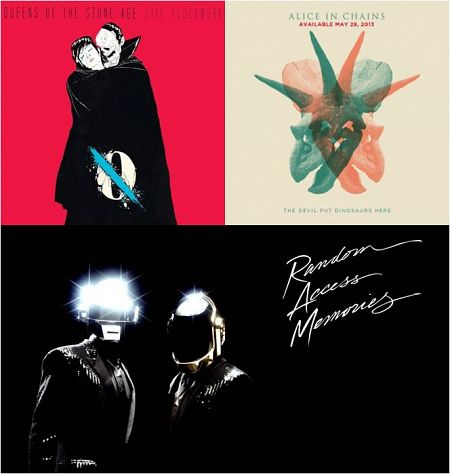 You might remember Queens of the Stone Age from hard rocking numbers such as No One Knows, The Lost Art of Keeping a Secret and First It Giveth. Led by creative force Josh Homme and filled out by a rotating crew of musicians including Dave Grohl and expelled bassist Nick Oliveri, Queens of the Stone Age have been rocking out, partying hard and taking massive amounts of illegal substances since 1996.

A constant collaborator, Homme has worked with artists as diverse as PJ Harvey, John Paul Jones, Mark Lanegan and Dean Ween. Side projects include Eagles of Death Metal and Them Crooked Vultures, and he is married to ultimate rock chick Brody Dalle.

Sixth album Like Clockwork is not the Queens of the Stone Age you remember. After a brush with mortality during routine knee surgery, Josh Homme seems to have mellowed. Don’t get me wrong, you’re not going to mistake this for a Yanni album, but it’s certainly more low-key than previous releases such as Rated R and Eva Vulgaris.

First single My God is the Sun is probably the heaviest track on the album, and the film clip is the culmination of a 15 minute video telling the story of a zombie, and some crows, and ... look, I’m not really sure what it’s about. Watch it yourself and work it out.

The whole time I was listening to Like Clockwork I was trying to work out who it reminded me of. It’s a bit Pink Floyd at times, a bit Beatles at others. A couple of songs sound like Muse. Eventually, it dawns on me. It’s Radiohead ― Queens of the Stone Age have gone Radiohead.

Best tracks: My God is the Sun, I Appear Missing

Sample lyric: ‘Most of what you see, my dear, is worth letting go.’  (...Like Clockwork)

Verdict:  5/10. Would be higher if it sounded like anyone other than Radiohead. I can’t f**ing stand Radiohead.


New Album by an old Artist with a new Singer

Despite constant denials that they were a grunge band, Alice in Chains rose to prominence on the musical wave led by Nirvana and Pearl Jam. 1992 album Dirt went quadruple platinum (over 4 million sales) and spawned hit singles Rooster, Them Bones, Down in a Hole and Would?

This being the nineties, lead singer Layne Staley had a fashionable heroin habit (see: Kurt Cobain, Kim Deal, Bradley Nowell) and little regard for his own wellbeing. After doing the inevitable MTV Unplugged special, Staley gradually became a recluse. He was found dead in his condo on 19 April 2002, after overdosing on a combination of heroin and cocaine known in the business as a speedball (the same thing killed John Belushi).

Much like AC/DC after the death of Bon Scott, Alice in Chains carried on, finding a new vocalist in William DuVall. The band released Black Gives Way to Blue in 2009 to positive reviews, and the band embarked on a long touring schedule.

Almost four years later, Alice in Chains have released their second album with DuVall ― The Devil Put Dinosaurs Here. First single Hollow was a slow burner, anchored by Jerry Cantrell’s signature droning guitar tone. Cantrell also handles a lot of the vocal duties on the album, having built his skills on solo projects such as Boggy Depot and Degradation Trip.

On the upside, The Devil Put Dinosaurs Here definitely sounds like Alice in Chains, with DuVall a solid choice to replace the fallen Staley. On the downside, the album suggests that Alice in Chains haven’t really grown since 1997. While some of the lyrics tread interesting ground, the music remains sludgy and plodding, and the riffs familiar and somewhat pedestrian. It’s not a bad album per se, it’s just that you’ve probably heard it all before.

Verdict: 7/10 — bonus point for not sounding anything like Radiohead

Ex-Oasis frontman Liam Gallagher recently had the following to say about Daft Punk’s new single Get Lucky; “I’d write that in a f**king hour.  I don’t know what the fuss is about, you know what I mean?’ As Gallagher the younger has never written a hit song (all the Oasis hits were written by Noel based on notes by Lennon and McCartney) this is clearly bollocks.

Daft Punk are a pair of semi-anonymous, helmet wearing DJs from France. When I say semi-anonymous, I mean that their names are on Wikipedia and their photos were recently leaked on Facebook. For some people, this is tantamount to revealing the identity of the Stig (hint: it isn’t really Michael Schumacher), but to everybody else Daft Punk are just a couple of random French blokes who make really repetitive music.

The duo first broke big back in 1997 with the song Around the World, a song with exactly three words in the lyrics. This was followed in 2001 by One More Time (17 words) and Harder, Better, Faster, Stronger (20 words). If you can get past the endless repetition and horrible auto-tuning, these tracks are probably good for people tripping off their brains in a club but pretty bloody awful for casual listening.

New Album Random Access Memories does little to address the problems of repetition and vocal tomfoolery, but does add some interesting elements to the mix. As is the custom of the day, collaboration is king, with no less than six tracks featuring guest vocalists. This works well with Pharrell Williams, who guests on two tracks (first single Get Lucky and Lose Yourself to Dance) but less so with charisma vacuum Julian Casablancas, who is so auto-tuned that you can’t distinguish between The Stroke and either of the Daft Punkers.

Much has been made of the 80’s influence on this album, but with the exception of some Pseudo Echo style keyboards and a frankly horrendous song about Giorgio Moroder, I just can’t hear it. The possible exception to this is Fragments of Time (with special guest Todd Edwards) that sounds a bit like late 80’s R&B. Whether this is a good thing or not depends on your perspective. At least it sounds like it’s being sung by a human being rather than a Speak ‘n Spell.

Sample lyric: ‘Let the music in tonight, just turn on the music, let the music of your life’ ― Give Life Back to Music (15 words)

Verdict: 3/10. A couple of semi-decent tracks but I struggled to get through the whole album more than once...