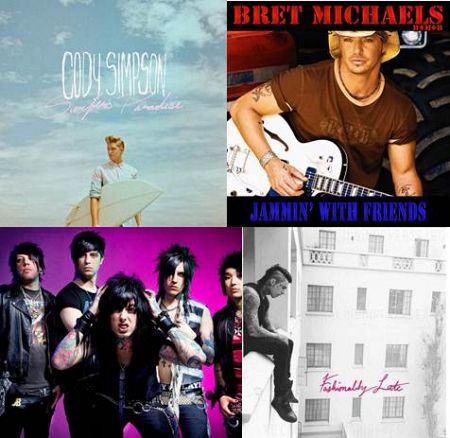 TRUE STORY: when I suggested to my wife that we listen to the new album by Bret Michaels, she glanced at me with a look of barely veiled contempt and asked: “The wrestler?”

When I stopped laughing, I explained that was thinking of Shawn Michaels, and I was talking about the guy who used to be the lead singer of Poison before he went on a reality TV show to find love with the sluttiest women that MTV could find. She still didn’t seem too keen, but I put the album on anyway.

If you grew up in the 1980’s you’ll probably remember Poison from such hits as Unskinny Bop, Nothing But a Good Time and Every Rose Has It’s Thorn. Along with Guns ‘n Roses, Bon Jovi, Warrant, Whitesnake and hordes of others, Poison rode the 80’s Hair Metal bandwagon to spectacular success with tight pants, big hair, and lyrics about getting laid and having a good time.

Then the 90’s came along. Some critics credit Nirvana with killing hair metal but, in truth, the whole scene had become so ridiculously self-indulgent and ridiculous that it was already dying of natural causes. The modern flag bearer of the hair metal scene is Steel Panther, which might be vaguely funny for five minutes but gets profoundly tedious shortly thereafter.

Still, credit to Bret Michaels, he eventually rose from the ashes of hair metal to jump on another questionable bandwagon — reality TV. Taking inspiration from the always classy Flavor Flav, Michaels starred in a show called Rock of Love with Bret Michaels, where 25 women competed to be his girlfriend. Remarkably, after three full seasons for Rock of Love (the third of which was held on a tour bus), Bret has failed to find true love — but has no doubt kept the staff at his local VD clinic busy.

Fast forward to 2013, and Michaels has released Jammin’ With Friends, a mix of new tracks and covers performed by Bret and a laundry list of friends and hangers on. Some names you may recognise include; Ace Frehley from Kiss, Michael Anthony from Van Halen, Mark McGrath from Sugar Ray, Phil Collen from Def Leppard, Lil Jon, Jimmy Buffet, Miley Cyrus and Loretta Lynn.

If number of guest stars were a measure of greatness, this would be an awesome album. Unfortunately, Bret Michaels isn’t quite the singer he once was.  Whether it’s his well documented battles with substances, or an stubborn throat infection he caught from one of his many girlfriend candidates, Bret just doesn’t sound as good as he used to. In terms of music and lyrics, not much has changed — it’s still all about parties, girls and having a good time. The only exception to this is The App Song. And the less said about that one the better.

Still, if you can look past some uneven vocals and the odd hokey song choice, Jammin With Friends probably isn’t a bad album to put on in the background of an age-appropriate dinner party.

Best tracks: Unskinny Bop, Talk Dirty to Me, Get Your Rock On

I must admit that I first picked up this album because I thought the guy on the cover had cool tattoos. This may or may not make me a bogan, I’m not sure. Probably.

Anyway, Falling in Reverse are a five piece band from Las Vegas who formed in 2006. They call themselves ‘post-hardcore’ which is another way of saying that they sound a lot like Linkin Park crossed with Good Charlotte. Lead singer Ronnie Radke used to be in another ‘post-hardcore’ band called Escape The Fate, but got kicked out after he was sentenced to two years in prison for battery.

The album received mixed reviews and sold sporadically, but that didn’t discourage Ronnie Radke, who doubled down, got some more bad tattoos and started writing new music. He also signed the band to Epitaph Records, owned by Bad Religion’s Brett Gurewitz and home to punk artists such as The Offspring, Pennywise and Rancid.

This change in scenery led to an evolution in Falling In Reverse, with the band shedding drummers faster than anyone since Spinal Tap. Radke also developed a penchant for hyperbole, tweeting that the new album was ‘light years’ ahead of the last one and it would cause people to ‘lose their minds’. First single Alone sounds like it could have been recorded by comedy rap act The Lonely Island and hardly strikes me as being light years ahead of anything — but, then, I’m guessing that Ronnie Radke propably doesn’t know what a light year actually is.*

By far the worst track on the album is Bad Girls Club, a song which sounds like One Direction trying to be all hardcore and tough. It’s hilarious in a sad sort of way.

The biggest problem with Fashionably Late is the band’s hummingbird-like attention span, which sees them leaping between half a dozen genres in a single track. Sure, bands like Linkin Park and Limp Bizkit successfully mixed rap and metal, but Falling in Reverse pinball about between metal, rap, punk, pop and hardcore on almost every song, with a touch of country and jazz thrown in here and there for good measure.

Sample lyric: ‘Man I’ve been in rap since I was shittin’ in Pampers, climb the ladder to the top and now I’m shittin’ on rappers.’ (Alone)

Verdict: 4/10 — flashes of inspiration are buried under needless genre mashing

If you are a tween girl, you probably already know and love Cody Simpson (and well done for reading this website, young lady), but for everyone else, here’s a quick primer:

Unlike his Canadian mentor, Simpson has thus far avoided spitting on his fans, treating his audiences with contempt and generally being a douchebag. This should be considered a positive, although it may only be a matter of time before Cody is adopting quirky pets and abandoning them in foreign countries.

Like many young artists, Cody started his career playing cover songs on YouTube, where he was discovered by producer Shawn Campbell. His debut single iYiYi featured Flo Rida, and was followed shortly thereafter by the EP Coast to Coast.

Simpson attempted to push his target audience even younger with a cover of I Want Candy, however someone must have mentioned that most five year olds don’t buy music, because his new album focuses keenly on the 11 to 15 year old set.

New album Surfers Paradise treads a safe path, with light, poppy songs and inconsequential lyrics about having fun in the sun.  First single Pretty Brown Eyes ticks all of the tween appeal boxes and acts like musical kryptonite to anyone over the age of 21 – it’s just not made for us.

In terms of album length, Surfers Paradise barely breaks EP status at only 8 tracks long. Most of the songs are pretty much interchangeable, with the exception of the hilariously bad Imma Be Cool, featuring Asher Roth (whoever that is).

A side note for older readers — Cody Simpson was born in 1997.  By my reckoning this makes him about twelve years old, although maths has never been my strong suit.  This is my strong suit.

Sample lyric: ‘I ain’t really found a girl that gets me, but that don’t mean I walk around feelin’ empty, it only means I gotta be patient for a while, and that’s alright.’ (Imma Be Cool)