This week, John Turnbull has a bit of undercooked Blues, a tasty piece of well-polished Metal, and a double of a Scottish power trio who were named after an obscure Welsh village. 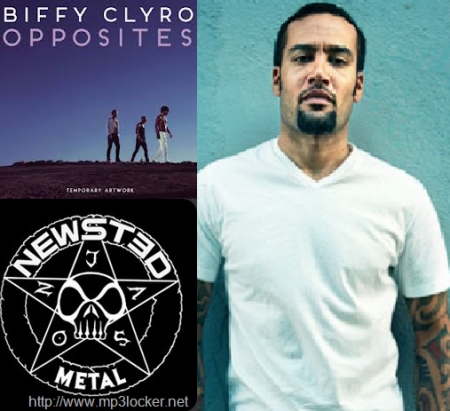 If you haven’t heard of Biffy Clyro – and let’s face it, with a name like that, you would remember if you had – here’s a quick backstory.

Originally formed in Scotland in 1995, but going by the less catchy name of Screwfish, Biffy Clyro is made up of a pair of ginger twins called Ben and James Johnston and a skinny guy with dodgy tattoos called Simon Neil. Ben plays drums, James plays bass and Simon plays guitar. They all sing.

Biffy’s first few albums were wildly experimental, and sold as well as wildly experimental albums tend to sell, which is to say fairly poorly. In 2007, Biffy Clyro discovered hooks and the album Puzzle was released to widespread critical acclaim and decent sales. Follow-up album Only Revolutions (2009) included the single Mountains, which will probably bring back some memories if you listened to Triple J at all that year.

Now, in an age when many artists don’t see the point of albums – happy to release single after autotuned single – Biffy Clyro have released a double album. And it’s pretty bloody good. Divided into two parts, subtitled The Land at the End of Our Toes and The Sand at the Core of Our Bones, Opposites features virtuoso musicianship, intelligent lyrics, and some of the best honest rocking since Axl met Slash. Influences range from Led Zeppelin to Cheap Trick (the excellent Pocket features a keyboard line lifted straight out of Dream Police) and there is enough depth in the album to warrant multiple listens.

Jason Newsted used to be the bass player in Metallica, before he quit (or got fired, depending on who you believe). After original bassist Cliff Burton died in a bus crash in Sweden, Newsted joined the band and was treated like the new guy for the next fifteen years as the rest of the band slowly became pretentious, self-involved assholes. For evidence of this, watch the documentary Some Kind of Monster, where singer James Hetfield and drummer Lars Ulrich snipe at each other like an old married couple, while paying a Cosby-sweater wearing therapist $10,000 a day to listen to their rich white-guy problems.

Fortunately, Newsted didn’t let this experience crush his metal spirit (hello, Dave Mustaine), and he went on to tour with Ozzy Osbourne, record an album with speed metal pioneers Voivod and play extensively with his own band Echobrain.  Perhaps inspired by Rob Halford, who formed the band Halford when he left Iron Maiden, Newsted has formed a new band called Newsted, with Jessie Farnsworth on guitar and a guy called Jesus on drums.

Somewhat of a literalist, Newsted has called his first EP Metal, which would make it easy for the clerks in HMV to find it — if HMV hadn’t just fired all of their clerks. At four tracks long, there isn’t a lot of room for self indulgence (see Ben Harper, below) but at the same time there isn’t an enormous amount of variety — only King of the Underdogs varies from the flat-out-loud-as-hell-fuck-you-if-you-don’t-like-it-template. The first single Soldierhead is a pretty good example of the whole EP — if you like this, you’ll probably like Metal.

Best track:  King of the Underdogs

Album I’m Pretty Sure is Going to Suck

Ben Harper and Charlie Musselwhite — Get Up!

Once upon a time, Ben Harper was cool. He sang songs about smoking joints (Burn One Down), lesbians (Mamma’s Got a Girlfriend) and social inequality (Excuse Me Mister). For a while he got a bit holier-than-thou, with every second song talking about how much he loved the man upstairs (Two Hands of a Prayer, In the Lord’s Arms), but he still rocked out now and again.

Then Ben Harper fell in love with the Blues. He’d always flirted with blues stylings, but now it became a full blown obsession. For a while, it was cool. The ten minute jams got a bit tedious, but overall it was still listenable.

That was a few years ago.

Charlie Musselwhite is a proper blues musician, coming up in Chicago alongside the likes of Muddy Waters, Buddy Guy and Howlin’ Wolf. The fact that he is white is of little consequence, but does lend credence to the urban legend that Elwood from the Blues Brothers was modelled on Charlie.

Some may say that the best days of blues are in the past. Get Up! doesn’t do much to challenge that argument.

As an album, Get Up! is an example of blues done not very well.  The lyrics are faux-meaningful and repeated ad nauseam over a combination of smooth blues riffs (from Musselwhite) and self-indulgent noodling (from Harper). The title track is a prime example, dicking about for six minutes and seventeen seconds without saying anything new or interesting.

Verdict: 2/10. Buy only if you really, really like everything that Ben Harper has ever done.