This week, we’ve got a concert album by the biggest metal band in the world, new tunes from the man nobody calls Hercules, some Southern Fried rock and some Aussie boogie-woogie. 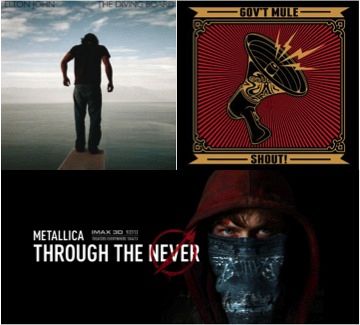 Metallica: Through The Never

Metallica have always been known as a great live band and so it was inevitable that they would eventually make a concert movie. Through The Never is the concert movie in question, and I had the pleasure of seeing it and listening to the soundtrack very recently.

A virtual best of, Through The Never includes songs from almost every album that Metallica have ever released. Therapy album St Anger doesn’t get a look in, but there was a whole movie made about that album (Some Kind of Monster) and the less we see of that naval-gazing Metallica the better.

The movie is bookended by a story of sorts, starring Dane DeHaan and directed by Nimrod Antal. DeHaan plays a roadie forced to pick up a mysterious package that the band really need (a hair transplant for Lars, perhaps?) against the backdrop of a futuristic riot. The story is almost totally superfluous to the movie and fortunately only takes up about fifteen minutes of screen time (despite the prevalence in the trailer).

Through The Never is really all about the concert — and what a concert!

Kicking off with the Ennio Morricone instrumental The Ecstasy of Gold, the band launch into a one-two punch of thrash classics with Creeping Death and For Whom The Bell Tolls. Fuel from Reload sounds better now than when it was released, Ride the Lightning electrifies despite a brief vocal outage, and the eight and a half minute version of One does well to capture the theatrical atmosphere of the live event.

New track Cyanide from 2012’s Death Magnetic holds up well against the well-aged material around it and by the time the band rip into Battery and Nothing Else Matters the album is well on the way to classic status. The track selection and exceptional production quality lift Through The Never above the vast reservoir of Metallica live albums available officially and via bootleg; this is an album that every Metallica fan should own.

There are a couple of moments on the soundtrack that will make more sense after seeing the movie, although apparently an on-stage catastrophe late in the gig is an homage to something that happened twenty some years ago. This may also be the case for singer James Hetfield forgetting the lyrics on a couple of occasions — it’s all part of the Metallica charm.

If you’re a Metallica fan, or a fan of heavy music in general, odds are that you’ll enjoy this album. If you’re not a fan of heavy music and think melody is a lost art, check out the album at the end of the column. It’s not as good as this one (at least to my ear) but it’s probably slightly more melodic...

Sample lyric: "This is what’s it’s like in our garage…"  (Intro to Hit The Lights)

Verdict: 9/10 — the best Metallica album since the Black Album and the best live album of their thirty year career.

Gov’t Mule have been around since 1994, but most people have never heard of them. Originally formed as an Allman Brothers side project by guitarist Warren Haynes and bassist Allen Woody, Gov’t Mule have released eight studio albums over the last 19 years.

The Mule (as they’re known to their fans) play a mix of Southern rock, funk and blues. With influences from Cream to Hendrix and the Grateful Dead, the band have been frequent collaborators throughout their career, culminating in their new album Shout!

Released as a double album, Shout! is unique in that it features an identical track list on both discs.  The first disc is performed by Haynes, the second by a roster of music luminaries who each reinterpret the tracks in their own way.

Guests include big names like Ben Harper, Elvis Costello and Steve Winwood, along with blues greats like Dr. John and reggae trailblazer Toots Hibbert. Their contributions range from a simple cover version to complete reinvention, and Hayes along with bandmates Matt Abts, Danny Louis and Jorgen Carlsson provide a solid musical base for the guests to build upon.

While Warren Haynes isn’t a bad singer by any standard, some of the guest artists leave him in the dust. Dr. John lays down a stone groove that retains interest for a full ten minutes on Stoop So Low, while Elvis Costello continues to display the renewed passion recently shown on his album with The Roots.

In case you were wondering, the official pronunciation of the band name is Government Mule, but I prefer to put an old-timey prospector spin on it — something along the lines of Gub’mint Mule.

Sample lyric: ‘And now it’s time to face the truth, but don’t be scared to live.’ (Scared to Live)

Verdict: 7/10 — Indisputably groovy, Shout! Is a great album to listen to on a Sunday afternoon with a few friends and the intoxicant of your choice in hand.

Elton John: The Diving Board

Don’t get me wrong; it’s not that I don’t like Elton John. On the contrary, I think he’s a legend. Tiny Dancer is one of my favorite songs and his contribution to the animated movie soundtracks is only second to Randy Newman.

On the other hand, it’s been a long time since Goodbye Yellow Brick Road and these days the artist formerly known as Reg Dwight is better known these days for throwing tantrums than releasing new music.

Written with longtime collaborator Bernie Taupin, The Diving Board is Elton’s 31’st studio album, which is pretty impressive until you remember that Slim Dusty made 105 albums, which makes Elton seem a little lazy in comparison.

First single Home Again evokes times past, longing for a better, simpler time that has long passed into history.  It’s a solid enough track without being particularly memorable, but it introduces a theme that runs heavily thought the entire album.

The Diving Board is an album about growing old. The ‘good old days’ are held up with fond reverence, and even the cadence of many songs seems to slow to reflect the advancing years. The Elton/Bernie team still has the ability to produce good songs, but you get the impression that they’re coasting on goodwill for much of The Diving Board.

A bit of trivia: Elton’s adopted middle name is Hercules.  And why not?

Best tracks: The Diving Board, The Ballad of Blind Tom

Sample lyric: ‘I woke up with an accent, I wound up in quicksand.’  (My Quicksand)

Last but by no means least, we’ve got a new category. This is for music that is recommended to me by you, the fine readers. Ch-check it out… will feature bite-sized reviews of styles outside my usual repertoire.  Minor internet kudos to the first reader to identify where the title comes from.

Jan Preston: My Life as a Piano

Jan Preston collects pianos and at one point had seven stuffed into her modestly sized Sydney home. She has picked them up from the side of the road, bought them at garage sales and saved them from the axe. While pianos may seem like an inconveniently large item to collect, it’s all worked out pretty well, as the lady can play like a demon.

After finding success in Germany with her sassy take on boogie-woogie, Jan has returned home and is touring Australia to support the release of new album My Life as a Piano. Kicking off with a boogie-woogie cover of the Stones Honky Tonk Woman, the album showcases Jan’s range and vocal shops, dancing lightly from one playing style to another.