As requested by Gavin and Stacey, a pair of manly men with manly beards, this week John Turnbull considers the manly world of soundtracks. 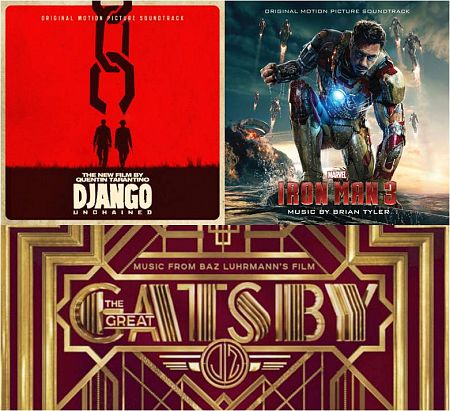 SOUNDTRACKS ARE an odd beast.

Perhaps these are questions for the ages. For now, let’s listen to some new music, shall we?

Quentin Tarantino is widely regarded as a master of the soundtrack, and is responsible for at least two that achieve the aformentioned excellence. His first film, Reservior Dogs, was anchored by a torture scene played out to the strains of Stuck in the Middle with You by Steelers Wheel and included obscure but catchy songs like Little Green Bag by the George Baker Selection and Hooked on a Feeling by Blue Suede. Holding the soundtrack together are snippets of dialogue from the film, chiefly Steven Wright’s deadpan DJ from K-Billy’s Super Sounds of the Seventies.

After Dogs came Pulp Fiction, again accompanied by a cracking soundtrack. Highlights this time included the Dick Dale classic Miserlou, the haunting Son of a Preacher Man by Dusty Springfield and a passage from the bible. You know which one.

It is this use of dialogue from the film that can make or break a soundtrack ― a classic line or two can be great, too much becomes grating after a couple of listens. In the case of Django Unchained, Tarantino gets it mostly right ― with one notable exception. The frequent use of the word n***** in the film is acceptable in context (unless you’re Spike Lee) but stands out like the proverbial dog’s bollocks on the soundtrack.

This is an album that you won’t be able to listen to when pretty much anybody is around. Even people you think are cool are likely to be offended. One guy I know made the poor choice of putting it on during a kids party; needless to say, his wife was unamused...

The majority of the music on the album is old timey (Django, His Name is King) and bears a deep debt to composer Ennio Morricone, who contributes three tracks. Now and again, there are moments of hardcore rap, including the menacing 100 Black Coffins by Rick Ross and Unchained by James Brown and 2Pac (who has been dead for 17 years, but still managed to record a new song, like a rap Yul Brynner).

Verdict: 8/10 ― definitely listenable, despite the frequent use of the N word...

I will be honest here ― I have no desire to see The Great Gatsby. I was forced to read the book at school and didn’t particularly enjoy it. I watched the 1974 Robert Redford version of the film and fell asleep ― twice. And last, but not least, I am of the humble opinion that Baz Luhrmann is a director of limited talent who puts style over substance and thinks that bigger/louder/more is always better. With that out of the way, I’m doing my best to listen to the soundtrack with an open mind.

The album is produced by Jay Z, who contributes two original tracks and a mixed bag of other stuff.  The first of these is the cookie-cutter 100$ Bill, which sounds like an outtake from American Gangster.  Things don’t get much better with a cover of Back to Black by Beyonce and Andre 3000, which was so bad that the family of Amy Winehouse apparently complained. I can see why. It’s bloody awful.

It takes a while before things start to look up, with Lana Del Rey turning in a typically sultry performance on the lyrically underwhelming Young and Beautiful.

Bryan Ferry and his Orchestra contribute what I assume is a parody version of the Roxy Music classic Love is the Drug. Oh, didn’t you know that Bryan Ferry has his own orchestra? Well, he does. He won it in a poker game from Elton John.

Ferry’s Orchestra returns later to accompany Emile Sande on a cover of Beyonce’s Crazy in Love. It’s not as good as the original and you have to wonder, with Beyonce already appearing on the album, why they didn’t just ask her to do it?

The suddenly hip Gotye contributes an old track, Heart’s a Mess. It’s whimsical enough to fit the tone of the album, but still a good song. Up next is Jack White, with a song called Love is Blindness, a U2 cover that proves U2 songs always sound better when sung by people other than Bono. Raw and passionate, this is without doubt the best track on the album.

Snippets of dialogue distract momentarily before Australia’s own Sia contributes a track called Kill and Run, during which she channels Edith Piaf. While this is probably appropriate for the film, it really doesn’t make the best use of Ms Furler’s extensive range and unique vocal approach – the track might as well be sung by Celine Dion.

Jay Z teams up with Kanye West, Frank Ocean and some guy called The-Dream on No Church in the Wild. You might recognise this song from the film trailer and it’s pretty catchy. I’m not sure it’s something they would have appreciated in the roaring twenties, however...

Verdict: 7/10 ― better than I expected, and potentially a lot better than the film itself…

I’m always wary about soundtracks that claim to be ‘inspired by’ a film. After all, Charles Manson was ‘inspired’ by The Beatles, yet few people would argue that he is a good representation of their core beliefs and values.

The soundtrack to the first Iron Man film was decent but entirely predictable ― a bunch of fairly generic rock songs anchored by the Black Sabbath classic Iron Man. The soundtrack to Iron Man 2: Electric Boogaloo (I think that was what it was called) was by hard rock dinosaurs AC/DC.  Fortunately, as this was a collection of their greatest hits rather than a new album it was actually rather good.

This new album is populated by alternative rock bands that you’ve probably never heard of, like Imagine Dragons, Neon Trees and Redlight King.  Joining them are people who used to be in successful bands but are now doing something else, which might not be as commercially viable but is still art, man ― Andrew Stockdale and Robbie Williams.

Stockdale used to be the lead singer of seventies throwback Wolfmother, After the other two guys in the band left to pursue something new, Stockdale has doubled down and embraced the past. The track he contributes here is Keep Moving, which sounds like something Humble Pie might have written after a particularly big night.

Robbie Williams used to be in Take That, before he left and became a megastar. Here, he appears with so-called supergroup The Wondergirls on a track called Let’s Go All the Way. It’s not great, but... there’s nothing really I can add to that statement.

In the end, this might be generic alt-rock, but at least it’s inspired by a decent movie.