Formed over 20 years ago out of the ashes of Nirvana, Foo Fighters have built a reputation as one of the best live acts in the world. Entertainment editor John Turnbull reports from their Sydney live show.

Frequent visitors to Australia, Dave Grohl and his band of merry men hit the ANZ Stadium stage and blasted into three songs in a row, taking the 52,000 strong crowd in the palm of their hand and not letting them go for the next two-and-a-half hours. Accompanied by guitarists Chris Shiflett and Pat Smear, bassist Nate Mendel, drummer Taylor Hawkins and touring keyboardist Rami Jaffee, frontman Grohl showed why the Foo Fighters are one of the most popular live bands in the world — they know how to rock and they have a great time doing it.

Opening the set with funky new track Something From Nothing, it doesn’t take long for the band to start playing the hits that fan want to hear, the opening riff of The Pretender drawing a roar of approval from the audience. Still spry as he enters his late forties, Grohl traverses the massive stage at a flat out run, making sure that every person watching feels the energy that he puts into his performance.

When he finally takes a break to talk to the crowd, Dave is funny and engaging, telling stories about the journey that has led them to their biggest performance ever in Australia. A legitimate rock star, he genuinely seems to enjoy every aspect of performing and can’t help swearing excessively as he talks about life on the road and being pelted with Mentos following the release of early single Big Me. His enthusiasm is infectious, spurring the crowd to rapturous heights as be breaks into a song dedicated to the "old motherfuckers", the rocking classic Breakout.

With a long runway out into the crowd and huge screens either side of the stage so the people in the cheap seats (or "dial up" as Grohl cheekily refers to them) don’t miss a beat, the band perform tracks from every album they’ve released. Personal highlights included This Is A Call, the first single the band ever released, All My Life and Monkey Wrench, which paused for ten anticipatory seconds of blackness before ripping into the final verse, screamed with passion by the entire stadium.

After this Dave picked up an acoustic guitar for a short solo set sung from the end of the runway, comprising Skin & Bones and Wheels, a song that is apparently popular only in Germany but still had the crowd singing along with every word. Rising from the depths, the band then joined him on a revolving stage in the middle of the audience, performing a series of covers that Dave explained they had started playing as a "shitty band in a tiny garage".

The fun kicked off with the Kiss classic Detroit Rock City, followed by a blistering version of AC/DC’s Let There Be Rock and a guest spot from Rage Against the Machine drummer Brad Wilk on Van Halen’s Ain’t Talking ‘Bout Love with vocals by Taylor Hawkins. The cover set concluded with a song introduced by Dave with the line "if you don’t know this song, I can’t be your friend" before a stirring version of Under Pressure, finishing up with a photo of Freddie Mercury on the big screen.

At the beginning of the show, Grohl had warned the crowd it would be ‘a long fucking night’, and he was true to his word, with some members of the audience growing weary as the gig approached the two hour mark. Ever the consummate showman, Dave let people have a rest with a couple of slow songs including Outside and These Days, before bringing everyone to their feet for a final trilogy of awesomeness.

After warning the crowd that the Foo Fighters "didn’t do that encore bullshit where they pretend to walk off the stage" , the band ripped into their final songs, starting with the slow burn of Generator and then increasing the tempo with Best of You. As they hit the opening chords of fan favourite Everlong the crowd exploded, singing along to every note. 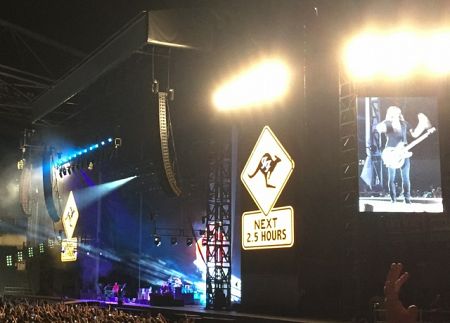 As the band bowed to the audience and the army of roadies prepared to tear down the massive stage, the crowd responded with an ovation worthy of the greatest live band in the world.

To say "a good time was had by all" would be an egregious understatement — this was truly a performance I will remember for the rest of my life. 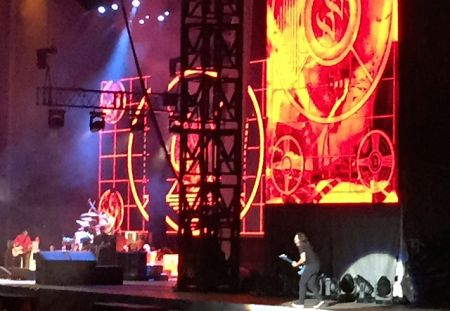