Are we losing our Australian language – our unique phrases and manner of speech – to the relentless advance of American popular culture? Popular author Hugh Lunn says 'too right'. David Donovan reports.

Are Australians losing their language?

According to bestselling author and three-time Walkley Award winning journalist Hugh Lunn, yes we are. In fact, for him, the situation is so dire that he has taken to cataloguing ‘Australianisms’ and placing them in books for posterity.

He has just released the second in his series on the Australian vernacular, 'Words Fail Me', which publishers HarperCollins have described as a


…long anticipated follow-up to the hugely successful and popular LOST FOR WORDS [which] revisits the rich, inventive and rogueish language Australians used to speak, before globalism stole it away.

Independent Australia met Hugh Lunn last week, after he spoke about his book to a gathering on the Gold Coast. It was held in a tightly packed room at the Broadbeach Library made up largely of baby-boomers who seemed transfixed by the 69 year-old author’s every word.

To paint a broad brush stroke picture of the man, it must be said that Lunn is not a particularly imposing character. He has a pleasant genial face, is a bit below average height, is slim and bald, and speaks with just a slightly high-pitched voice. At the event, he told a story about not having a “proper” girlfriend until he was in his 20s—this may not have came as an enormous surprise to the audience. Despite these trivialities, he towers over almost every other Queensland writer.

His achievements are manifold. He was a reporter for three decades and won the Walkley Award three times during the 1970s. He reached, perhaps, the apex of his journalistic career by becoming Queensland editor of The Australian. This job didn't stick, however, and he relates in his book 'Working for Rupert' that he had the privilege of being fired by the proprietor, Rupert Murdoch, on no less than three occasions. He is, of course, best known as an author and won The Age Book of the Year Award in 1985 for ‘Vietnam: A Reporter's War’. His most famous work, though, is the popular classic ‘Over the top with Jim’, which was the bestselling non-fiction book of 1991. Along the way, he convinced Senator Ron McAuliffe, president of Queensland Rugby League – on a 90-minute plane trip from Brisbane to Canberra in 1979 – about the viability of a Rugby League State of Origin series. And, in what is maybe his crowning glory, in June 2009, he was voted – alongside such numinaries as the Bee Gees, Powderfinger, Geoffrey Rush and David Malouf – as a Queensland Icon—one of 15 most "influential artists" in Queensland's history.

So, at our little gathering at Broadbeach, it was hardly surprising the audience was enthusiastic. The softly spoken author addressed the room for about an hour without notes, but with great wit and humour, about his fascinating life and the sad decline of the Australian language. Whilst he spoke, I found myself more and more nodding my head, and maybe even becoming a trifle concerned. As a fair dinkum, 40 year-old, true-blue Aussie bloke, it hadn't really occurred to me at all, previously, that our Australian idiom was disappearing. In my mind, my mates still spoke like Aussies; we still said “mate” repetitively and we still coined the odd Aussie phrase, such as: “flat out like a lizard drinking”, “fuller than a boot’, “fat as a tick”, amongst others. We were as Aussie as we had ever been—weren't we?

Not according to Lunn. Much that defined Australia – our unique language – has disappeared, so he said. And, my word, the more he spoke, the less it seemed he was coming the raw prawn! I remembered my Dad: he had dozens of different expressions just for surprise alone, all of them bottlers: “Strike me pink!” he would say, or “Jumpin’ Jehosophats!”; or, even more cryptically, “Hoagy Carmichael!”. You don’t hear those ones much anymore.

Lunn blamed the decline on the relentless advance of American popular culture, especially through television. As he said in his 2006 book ‘Lost for Words’:


The influx of American television could have added to our language, making it richer in nuance and colour. But instead it has taken over what we had, and inhibited expression. ‘You’d do a lot with a stick and a bucket of eggs!’ or “Don’t just stand around like a spare groom at a wedding!’ has been reduced to Get real!

As in George Orwell’s 1984, most people are now content to offer a few stock phrases, which have replaced a whole plethora of words and sayings.

Whatever
Tell someone who cares.
Get over it.
Get a life. 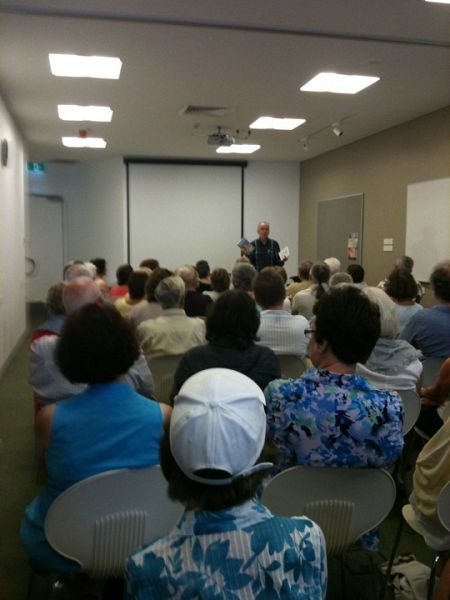 Lunn closed his address by talking about some of the Aussie phrases that are either as dead as a door-mat, or in seriously bad nick. When compared to the banal American stock we have inherited, these expressions from our heritage seem rich and intricate indeed—filled to the brim with good natured humour and gentle Australian teasing. Here are just a few of Lunn’s favourites:


'I’ll walk you to the door…so you don’t pinch anything.'
'We’ve just been talking about you! Nothing good, of course.'
'Ladies first, in case of snakes.'
'I thought you’d left the country!'
'Now she was an experience.'

In the traditional Q and A session at the end, the crowd bemoaned the American accents of children these days and contributed favourite phrases and sayings of their own. Lunn  dutifully transcribed (or at least pretended to) all the ones he hadn’t heard before in a small notebook he has apparently kept in his top pocket for the last 15 years specifically for that purpose.

A surreal moment arrived moments before the end when a gentleman at the back of the room – from a portion of Britain where the accents are not always the Queen’s own – offered the following:

Confusion reigned for a minute or two as Lunn endeavoured gamely to extricate meaning from the elderly expatriate, the latter becoming increasingly frustrated by Lunn’s total incomprehension.

“Strine, strine!” the man eventually exclaimed standing up and waving his arms, before saying (interpreted): “It’s a bastardization of the English language.”

The crowd enjoyed the obvious irony. The man’s point, it seems, was that the common Australian accent, sometimes known as “Strine”, does not closely adhere to commonly accepted principles of proper English pronunciation or, for that matter, enunciation. Lunn patiently explained to the passionate pom (who my father may have described as "mad as a meat-axe") that the way people speak is a different topic from the phrases they speak—the difference between accent and idiom. Indeed, Lunn observed, the ordinary Australian accent maybe even broader and harder on the ear than it has ever been. It is the richness of the language, not the accent, that appears to be suffering death from a thousand cuts.

Now, though, we have the work of Hugh Lunn to keep some of the phrases alive – on paper, at least – for future generations.

We can all do our bit to keep the language alive. Do you remember phrases your parents said that you don’t hear any more? Post them as a comment after this article. Or, better yet, send them to Hugh Lunn at hughlunn@hughlunn.com.au for him to put into, hopefully, his third book on this important topic.

Here is a short extract from episodes in Lunn’s first book “Lost for Words” in which he serialises some real Aussie vernacular from just post-World War 2:

Bert is at the back door, talking to Grace, his missus.

‘Mother, get the girls over for a hens’ night. I’m off to see a man about a dog.’

‘But you swore blind you were staying home tonight, Bert’ says Grace. ‘You know my sister is coming. You promised you’d stay in.’

‘Look, snooks, I don’t want to argue the toss. Kevin is waiting. It’s the big match tonight against those couple of easybeat brothers Alfie and Clem. I’m off like your grandfather’s trousers, off like a bride’s nightie, off like a couple of prawns left out in the sun.’

‘You can complain until the cows come home, till your blue in the face, it won’t stop me. I am sorry I’ll miss your sister. I clean forgot about it, Grace.’

“I’ll forgive you. Thousand’s wouldn’t. You’re off the hook. This time. I don’t know why you spend so much time up at that club, Bert.’

‘It keeps me out of mischief. You must agree with that.’

‘Alright, dear, but you better put on your good strides, you can’t go out looking like something the cat dragged in.’