SUBSCRIBE   DONATE LOGIN SHOP
SUBSCRIBE   DONATE
How we prevented a Morrison dictatorship
How Howard screwed the Libs
U.S. site tries to ruin what makes fairy bread great
Bloody Idiot of the Week — Episode 28: Get used to it
Morrison's 'politics of retribution'
Arts

FAMOUS MUSICIANS, the Beatles, once sang,

“You say you want a revolution? Well, you know, we all want to change the world.”

Well, the current Federal Minister for the Arts George Brandis QC is attempting to throw one of his own and change the national landscape of Australia’s arts world. According to the Liberal Government’s 2015 Federal Budget, in excess of one hundred million dollars will be slashed and burned from funding to the Australia Council, the Government’s peak arts funding and advisory body and champion for Australian arts both nationally and internationally.

The Australia Council was created by the dutiful work of a public servant by the name of Herbert “Nugget” Coombs who in 1967, persuaded Prime Minister Harold Holt to legislate and create the council. It was subsequently funded by the Holt government and subsequent governments including that of former Australian Prime Ministers John Gorton and Gough Whitlam (after his 1972 policy speech).

Brandis has effectively hamstrung the council financially, instead opting to create his own arts slush fund dubbed the ‘National Programme for Excellence in the Arts.’ The raid on the council’s funding has been slammed by artists and industry experts, as well as Shadow Minister for the Arts, Hon Mark Dreyfus QC MP, who has said that the move will take the arts back into the “dark ages.”

Brandis has launched an extraordinary raid on the Australia Council to create his own arts fiefdom | @beneltham http://t.co/nTgK3NcGXj

Cuts to Australia Council, Brandis to provide funding = political interference in the arts. Silencing artists an act of fascism #auspol

'the announcement of the 2015-16 Budget last night included measures which will significantly impact the work of the Australia Council on behalf of the arts sector. The Council’s Board and Executive will be giving very careful consideration to how these changes will impact on our ability to deliver on the Australia Council Strategic Plan, including support for artists and arts organisations through our new grants program and strategic projects.'

And so the Beatles revolution song continues,

“But when you talk about destruction don’t you know that you can count me out!”

In a press release issued by Shadow Minister for the Arts, Mark Dreyfus calls the Brandis move 'short sighted' and labelled it,

'a Government that says it supports freedom of expression but will only fund those who agree with them.'

Artists, (as Brandis is well aware) are creators who in many instances come with clout. 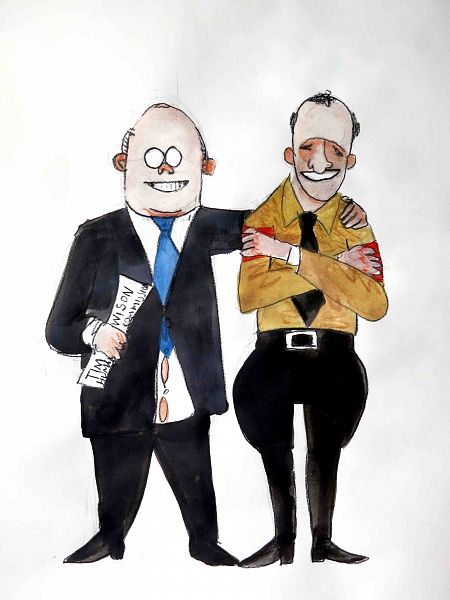 (Image by John Graham / @JohnGrahamArt - an artist with "clout")

By very definition, cultural art is both a transformation and collaboration, that embodies creative thinking and critique, which encompasses the analyses of contemporary culture alongside other art forms. It seems that the very idea of cultural art is now at threat with Brandis’ funding “pet projects” from his own ministerial hip pocket.

Needless to say, the liberal arts community are up in arms over this greedy power grab which has been widely described as a 'veiled attack on the independence and arms-length funding processes of the Australia Council.” He has further been accused of using government arts cultural funding as a 'political football'.

According to shocked social media and arts commentary, it’s time to be alert and alarmed as Brandis’ conservative motives are transparent. After all, this is a man who defends the, “right to be a bigot.” While it seems the liberal and progressive arts are facing their biggest challenge yet, artists work in the coming days and weeks will speak volumes. And of course, the senate is still required to pass any such legislative changes. Many senators may be reluctant to trounce a community that affectively holds society's megaphones.

Ultimately for now, Brandis, in the words of the Beatles,

“You say you got a real solution, well, you know, we’d all love to see the plan. You ask me for a contribution, well you know, we’re all doing what we can. But if you want money for people with minds that hate, All I can tell you brother is you have to wait.”

How this right-wing move will impact the arts in the long term remains to be seen. However in the coming weeks, let’s all expect more Georgie Grub caricatures and far less liturgical dancing.

These original cartoons by John Graham can be ordered from the IA store.