Contrary to the carbon claptrap put out by Abbott and his Minister for Environment, the world is moving fast on carbon pricing with 25% of GHG emissions now with a price on carbon. Dr Anthony M Horton jumps into the vacuum vacated by our Federal Government to give you the real facts.

IN HIS keynote address at the Business and Climate Summit, French President Francois Hollande echoed a message from hundreds of global businesses who support ambitious climate policies.

Carbon pricing is essential to move to a low carbon economy according to Hollande, and during the Summit, business leaders repeatedly asked governments for a price on carbon to facilitate increased investment in low-carbon solutions.

The World Bank Group recently released its Carbon Pricing Watch report which reported 40 national and 20 sub national jurisdictions (representing approximately 25 per cent of global greenhouse gas emissions) now have a price on carbon. In the past ten years, pricing instruments have increased threefold and now represent 7 Gigatonnes of carbon dioxide. 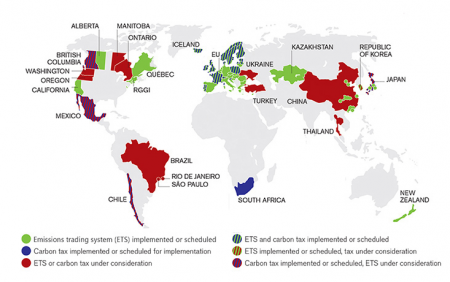 Governments are learning from each other and experimenting with different solutions in the wake of the growth of both carbon pricing instruments and private sector interest. Whether taxes or emissions trading schemes are being used, there is now increasing evidence of how to price carbon, and it is also clear that three jurisdictions are leading the way: the European Union (EU), California and China.

Despite the myth that the EU’s trading system isn’t successful, it was clear, based on recent meetings in Paris and Barcelona, that it is delivering. It currently covers 31 countries and more than 11,000 facilities. According to the EU Environment Agency, carbon dioxide emissions have dropped 19 per cent between 2005 and 2013 — which is in alignment with the target of a 21 per cent reduction by 2020.

Companies that participate have discovered new efficiency opportunities, and many are moving from purely a compliance to a re-engineering approach that yields higher cost savings while delivering higher quality products.

Other jurisdictions can learn from the EU system, and therefore it can be a catalyst for growth of successful carbon pricing such as that seen in California, Korea and China.

California-led pact with 11 other international states/provinces could be foundation for carbon market expansion http://t.co/KVr2RzceH4

California is now home to the world’s largest economy wide emissions trading scheme (ETS) and is seeing its economy grow while emissions decrease. Learning from the EU system, California implemented a set of flexibility and cost-containment provisions such as allowance banking and borrowing, a price floor and an allowance price containment reserve and the use of offsets. These are now used in the California and Quebec system, which Ontario is planning to join.

China has launched 7 regional emission trading pilot schemes in the last 2 years, and in total they account for 1 Gigatonne and approximately 25 per cent of the country’s GDP. A national scheme due for launch next year is currently underway.

The pilot schemes were designed to encourage innovation while maintaining some common features of other schemes such as sectoral coverage, the use of free allowances and banking of allowances. They cover direct emissions from fossil fuel and electricity use including those from electricity generated outside their boundaries.

As of April this year, 22 million tonnes had been traded and other cities and regions including Gansu, Qingdao and Hangzhou are also planning their own ETSs.

Minister for the Environment, Greg Hunt, can be guaranteed to lie about the take-up of carbon pricing around the world

Investor groups and business leaders alike are watching the developments associated with these schemes closely and are increasingly supportive of carbon pricing. Through the Carbon Pricing Leadership Coalition, dozens of business leaders along with investment and government leaders are collaborating to determine the best practices and understand the implications of a number of pathways to carbon pricing.

In their minds, its no longer a question of whether climate change impacts their bottom line, the question is how to mitigate the associated risks.

These companies and governments have acknowledged the impacts of climate change to their business, which is more than what the Abbott government has done. They are also part of a growing community that is actively seeking and sharing mitigation and management strategies, and this collaboration is going to grow in terms of both the number of partners and possible strategies.

They are also aware of the significant difference between taking opportunities to invest in mitigation and management now and having to spend much more at a time when the cost of mitigation may well be prohibitively expensive from a business perspective and mitigation itself may be meaningless.

I am very keen to see how China’s national ETS goes, given that it is slightly different in design from the others from which it can learn. The pilot schemes appear to have achieved very good results, so the scale of the outcome that is possible on a national basis is immense.

The national scheme will give them further reason to question the actions of other nations such as Australia who are becoming increasingly isolated with respect to the reality of climate change, its implications and impact on a country’s economy.

Don't listen to Mr Hunt, get the real facts. Subscribe to IA for just $5.