Voltaire and the Murray-Darlin Basin Plan

What can an eighteenth-century French writer and philosopher tell us about water management in Australia today? Emma Carmody says, if it's Voltaire, quite a lot. 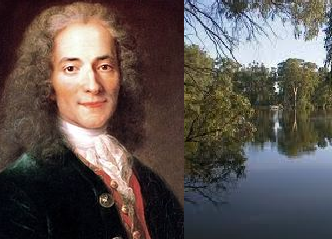 WHAT CAN an 18th century poet, novelist, playwright and philosopher tell us about water management in 21st century Australia?

Well if he happens to be Voltaire – an individual whose legacy includes the idea that empirical evidence should inform public policy and administrative decision making – quite a lot.

As a public interest environmental lawyer, I’m particularly interested in the who, how and why of administrative deliberation. Like many of my (sadly endangered) species, I’d like to see our civil servants and politicians make environmental decisions on the basis of best available science, and to implement the principles of ecologically sustainable development (ESD).

In a country as wealthy and as educated as Australia, this is a far from radical proposition. In fact, given the dramatic decline in biodiversity since colonisation, our status as the driest inhabited continent on earth and the latest climate predictions (to name but a few pressing concerns), I’d say that the application of ESD is the sine qua non of modern, civilised governance. When we consider that environmental degradation tends to disproportionately affect the nation’s (and the world’s) poorest, it also becomes evident that sustainable development is indivisible from fairly elementary notions of justice.

Translating the principles of ESD into tangible outcomes is a complex business, but science can and should play a central role in ruling out activities which threaten the integrity of ecosystem function, erode our remaining biodiversity or undermine efforts to contain global warming.

The final version of the Murray-Darling Basin Plan got me thinking about this, and more. At the risk of sounding obscure, this “more” culminated in an extended reverie about irony, French philosophy, democracy and yes, administrative law. There’s a weird but defensible logic to all of this – and the Enlightenment’s “voices of justice” are its source.

The Plan was born out of a century of uncapped irrigation which progressively eroded water-dependent ecosystems across the Basin and left the Murray almost permanently severed from its ocean-mouth. Historical analysis aside, its obvious political genesis was the Millennium Drought, the severity of which prompted John Howard to pass the Water Act 2007. This statute, which mandated Federal management of Basin water resources, sought to reinstate an environmentally sustainable level of “take” in the Basin. This was to be achieved by developing a Plan that implemented a suite of environmental treaties, and which was based on best available science.

According to the Wentworth Group of Concerned Scientists, even the upper limit of this bracket:


'...still falls well short of satisfying the requirements of the Commonwealth Water Act 2007 to deliver a healthy working Murray-Darling Basin.'

By way of concrete example, the 3,200 GL/year reduction scenario will only meet 66 per cent of the targets set by the government’s own specialist agency to measure ecosystem health across the Basin.

In other words, the final Plan appears to have ignored scientific data the Commonwealth spent a fortune accumulating. It may breach the Water Act and fail to implement Australia’s obligations under several environmental treaties. Assuming that this is indeed the case, it not only deserves a gong for most ironic decision-making process of the year, but is indicative of something more pernicious; something which democracy and the rule of law were supposed to have erased from modern governance eons ago: the arbitrary exercise of power.

In Australia we tend to forget that representative government, transparent, rational decision-making and the division of powers are historical constructs. In other words, they haven’t always existed and there’s no guarantee they always will. Medieval Europe was subject to the superstitious, absolutist rule of kings and popes, and while that might seem like forever ago, just consider that millions of people still abide by religious dogma that is considerably older – and in many instances just as extreme.

Amnesia aside, it’s arguable that modern European statehood and democracy were to a large extent products of the Enlightenment, which was itself a reaction against the injustice of monarchy and papacy. What is particularly fascinating is the role that science played in instigating this political and social revolution.

In fact, science either directly or indirectly inspired Enlightenment thinkers like Voltaire, Locke and Montesquieu to devise rational systems of governance that promoted equality and freedom. While these thinkers did not necessarily support one administrative model, and diverged wildly in their metaphysical conceptions of the universe, they were united in their abhorrence of arbitrary decision-making. Together they formed a broad philosophical bridge between science, politics and the law.

That said, I certainly don’t want to romanticise the Enlightenment or the bloody revolutions that followed. Nor do I wish to overlook the misuse of science and the law to justify Western Europe’s colonisation of Africa and the Pacific. That would be indecent.

However, history has also shown that the Enlightenment’s “voices of justice” may be applied to more noble ends, such as the division of powers. Given the context within which they arose, these voices are also a useful reminder of how fragile and contingent democracy really is; that we stand to lose a great deal when our governments replace well-informed, fair decision-making with arbitrary rule.

When we consider the breadth of environmental challenges facing Australia and the globe, “well-informed” and “fair” simply must include unbiased input from scientists regarding sustainable management of our finite resources. In this sense, science has an important role to play in protecting all of us and our planet from the vicissitudes of politics.

Let’s just hope it isn’t too late for the Basin to benefit from this basic tenet of Enlightenment wisdom.