Time to end the 'gas is cleaner' crock

When you take a look at the destruction of the environment and farmland wrought by mining coal seam gas, to describe it as 'clean' is laughable.  Lachlan Barker dissects the bowels of the predatory gas beast laying bare its not-so-clean entrails for all to see.

ONE ON THE myths constantly spread by the gas industry is that gas is cleaner than coal. A dubious claim as you will see. Additionally, greenhouse gas emissions from CSG are only part of the problem; the amounts of salt the CSG companies are building up already present a literally insoluble problem.

But first, to address emissions from gas.

On the website of the Australian Petroleum Production and Exploration Association (APPEA), it says this:

APPEA, as peak body for the gas and petroleum companies, use this "cleaner" claim to constantly press their suit upon governments in Australia to be allowed to explore for, then drill for, more gas, particularly "onshore resources", aka CSG.

So I decided to check this claim out to see if, for the first time ever, a fossil fuel industry claim held water.

Needless to say it doesn’t.

The "50-70%" claim is repeated in a lot of places, but is best described here by the U.S. Energy Information Administration (EIA).

So I did some complex mathematics into this and got a different figure for gases emissions, closer to 20-30% cleaner. The spreadsheet graphic here shows some of my math: 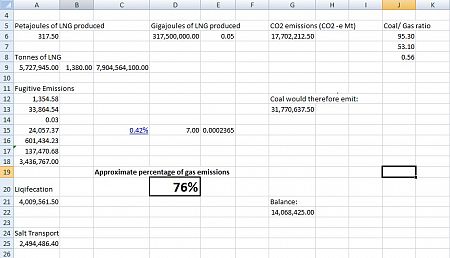 But then in my research I found that the Intergovernmental Panel on Climate Change (IPCC) had ratcheted things down even further, giving a figure of gas being only '10-20%’ cleaner. The IPCC figure is the one to use, they have teams of environmental auditors to do this, and a considerably larger budget than I did.

So to explain (briefly) the APPEA 50-70% figure simply compares the two fuels in a pure burn. However it’s not that simple.

Gaseous methane, the major component of natural gas, has to be processed through chilling to turn it into liquid natural gas (LNG). Like all thermal exchanges, this process is energy intensive, and so there are additional greenhouse emissions to do this.

Then there are fugitive emissions, these are leaks that occur at the well head, and through the pipes, and at the liquefaction plant. There has only been one study done on fugitive emissions from CSG in Australia, but the scientists who did it beg us all not to take it as definitive.

The scientists who conducted the study said flat out their study was not definitive as they only measured leaks from less than one per cent of Australia’s CSG wells. They then indicated that a wider study, over greater time, may return a completely different figure.

Fugitive gas leaks of methane are very damaging because methane is rated as approximately 25 times worse than CO2 as a greenhouse gas.

So the IPCC estimates, combined with some maths indicate that gas from CSG in Australia is at best 20% cleaner than coal.

However at this point it all became a bit academic, as gas is still a fossil fuel anyway, and since emissions zero renewable power can do the job now, today, then the gas industry are really pulling a long bow by trying to claim that gas is a remotely clean alternative.

It was, I mused staring at the spreadsheet, like asking someone if they would prefer gonorrhea or syphilis.

Clearly neither was acceptable.

I say that mostly because of the massive complexity of CSG. Think of all those wells, all those kilometres of pipes, leading to that massive belching liquefaction plant at Gladstone.

All that pollution of the air from flaring, the destruction of our precious farm land, the loss of water and pollution of our aquifers, and, finally, the social dislocation the gas companies bring that destroys communities.

Permanent destruction on a massive scale to get a mere 10-20% cleaner result than coal.

So having led you through a complex series of mathematics, it really was a waste of my time and yours.

Because then there is the salt. 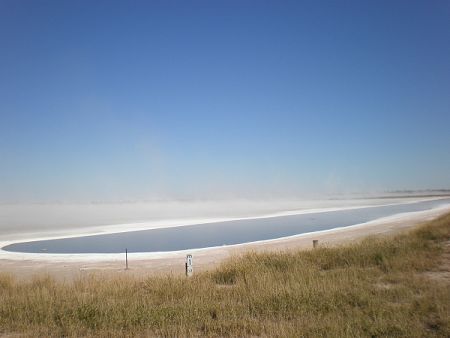 CSG works by sucking water out of the ground, then separating the gas from the water, leaving the remnant water, or ‘produced water’.

This produced water is chock full of nasties, sometimes it’s even radioactive. This water has to be then treated by reverse osmosis (RO) to remove as many of the dissolved nasties, salts among them, as possible.

In Queensland, in the case of one CSG company QGC, the now "clean" water is sold on to Sunwater, thence onsold to irrigators in places like the Dawson Valley.

A similar plan in NSW perpetrated by AGL at Gloucester was recently halted by the NSW EPA, the EPA saying:

“The EPA analysed data from the irrigation trial and was concerned about the levels of salt and metals - the presence of these made the long term viability of the program unsustainable".

So there is some conjecture that the "clean" water from the CSG companies is anything but clean.

While the RO process is generally seen by impartial observers as effective, particularly on salt, in reality all you do is trade one problem for another. After the RO process the CSG companies are then left with enormous, horrible piles of grey, sludgy salt.

Then the CSG companies came up with the idea of crystallizing the salt and selling it as a food condiment, and to industry for use in chemical processes.

However the idea to sell it as edible salt is just as laughable.

APPEA themselves estimate that CSG in Queensland will produce 21 million tonnes of waste salt over 30 years, which is 700,000 tonnes a year. So, if they are eyeing a supermarket chain to buy this salt, they're unlikely to offload enough given Australians consume 40-50,000 tonnes a year and the CSG comanies will produce ten to twenty times that amount.

As at the date of writing, the CSG companies still have no answer for the salt.

Their latest plan is to build giant open-topped concrete holding tanks on the Darling Downs, and/or bury it underground. Here is the QGC response to a community member’s question on the salt: 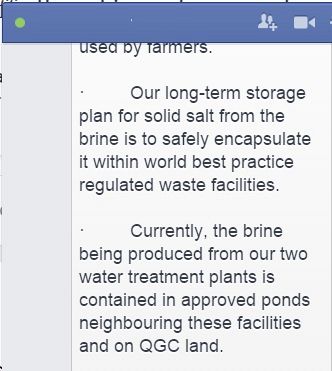 However this is no solution at all, as clearly the first flood event that comes by will wash the lot into the nearby rivers, such as the Condamine. And as you can see in this graphic, the Downs is already at high risk of salt damage:

The addition of some 21 million tonnes of salt from the CSG companies on top of all that is clearly just too great a risk.

The safe limit for salt in drinking water by the way is ~1000mg/L, (seawater is around 30,000mg/L) if this 21 million tonnes of salt gets into the system it will turn 10.5 trillion litres of water undrinkable.

This is 10 million megalitres, and to put that into context, the massive Carmichael coal mine proposed for the Galilee basin in Queensland is slated to use 730 megalitres a year.

So the CSG companies are going to poison a LOT of drinking water.

So, when you add all the emissions and throw in the salt, it’s clear to say that CSG is in no way a "clean" fuel.

Let us hope that the gas industry now stop trying to claim it is.

It really is time now for the disappointing Palaszczuk government to begin caring about the health of Queenslanders, and Queensland itself, by halting the entire CSG industry.

For the latest news on how governments of all stripes are destroying our environment, subscribe to IA for just $5.