Think for yourself: Fidget spinners

If you have a child aged between 5 and 14 there is a good chance that you know exactly what a fidget spinner is. In the event that you’re somewhere else on life’s journey, fidget spinners are the latest craze among the younger generation, less fiddly than loom bands and less likely to result in abduction than Pokemon Go.

From a technical point of view, fidget spinners consist of a centre bearing surrounded by a weighted casing, often containing three more bearings. The user holds the centre bearing and the toy spins around the outside. There are thousands of different designs, with prices ranging from about $5 to hundreds of dollars for high-end models, although they all do pretty much the same thing.

Who invented this wondrous product?

That’s not necessarily an easy question to answer. Many media outlets credit chemist Catherine Hettinger, who patented a spinning disc toy in 1997, but let the patent lapse and hasn’t seen any profits from the current wave of popularity. The main problem with this narrative is that the current generation of fidget spinners bear almost no resemblance to Hettinger’s original design and the lady herself doesn’t even claim to be the inventor.

Google searches for fidget spinners were in single digits until mid-March this year, when interest started increasing around the world. Parents who tried to buy them at this point were met with confused looks in toy shops, and rumours of pop-up stores that appeared and disappeared within hours. By contrast, the toys are now on sale in every second retailer, from newsagents to health-food shops and dollar stores. They are being produced by multiple manufacturers to meet skyrocketing demand, but the sheer number of outlets suggests that supply may soon outstrip demand.

What about those dubious medical claims?

The popular narrative goes that fidget spinners were invented as a treatment for kids with special needs, however the reality of this is questionable. Non-inventor Catherine Hettinger was quoted as saying that she knew a special needs teacher who used the toys with autistic kids to calm them and some experts in ADHD argue that the toys could be useful within a structured environment.

On the other hand, scientific research on the benefit of fidget spinners is practically non-existent and a recent examination of the evidence by Forbes suggests that while there may be some benefits associated with fidgeting in general there is no proof that a fidget spinner is any better than a pen or a paperclip to play with.

“... there’s basically no scientific evidence that these things work across the board.”

Naturally, this lack of scientific evidence does little to discourage unscrupulous retailers from making grandiose claims about the benefits of fidget spinners, including claiming they are ‘perfect for ADD, ADHD, Anxiety and Autism’ and that they can “bring out your genius”.

Are the expensive spinners any better than the cheap ones?

In short, yes. Assisted by my lab technician Charlie Danger, I conducted a series of spin duration tests, both individually and simultaneously and averaged the results. This "science" showed a clear linear relation between price and spin duration, with the most expensive spinner rotating for over seven times longer than the cheap one. This raises the question whether a $700 spinner would spin for almost three hours, but I’m afraid my research budget doesn’t stretch that far. 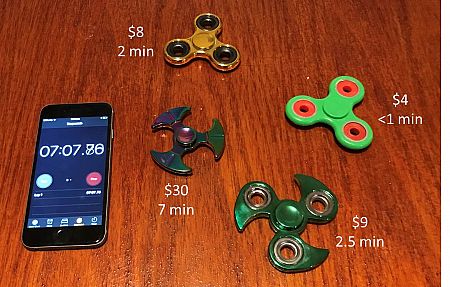 In that case, I might recommend the Fidget Cube, a new product from the makers of Fidget Spinners (well, one of the makers) with equally dubious claims of efficacy! Expanding from the simple "spin on an axis" concept, the fidget cube allows you to play with six sides of distraction, including things to spin, roll, flip, click and glide. It also has a smooth shallow indentation with the instruction to "breathe", which is supposedly based on the calming nature of traditional worry stones.

So if they don’t treat ADHD, what good are fidget spinners?

Well, they’re a toy. A toy that spins. From traditional dreidels to spinning tops and Beyblades, kids have had a long affinity for spinning toys. Oh, and you can do tricks with them. There are currently over 3.4 million fidget spinner trick videos on YouTube, the most popular of which has over 8 million views.

Just think, you could be as cool as this guy…

Raising a child with a learning or behavioural disorder can be a difficult and frequently frustrating process. If you have a child with autism, ADHD or a similar condition, giving them a fidget spinner is unlikely to do them any harm, but it’s also unlikely to do much to help them either.

Marketers spruiking the medical benefits of toys should be viewed with a sceptical eye, but they’re no worse than those who push detox cures, coffee enemas or chelation therapy as treatment for autism. In fact, I’d suggest they’re a lot better than those last people, because you can get a fidget spinner for less than ten bucks when chelation therapy will cost you thousands a likely as not kill you…