As fires raged in Sydney, there has not been a peep out of the mainstream media about the fire hazard to Lucas Heights nuclear complex. Noel Wauchope reports.

THE LATEST news on the bushfires raging in Sydney's south-west is that the firefighters are "cautiously optimistic" and that emergency warning advice has been downgraded to "watch and act".

However, the fire continues to burn in an easterly direction towards Barden Ridge and weather conditions are still dodgy, as Sydney's record-breaking heatwave looks like coming to an end.

It's been an anxious time — the fire has burned over 2,400 hectares. On Sunday (15 April), more than 500 firefighters in almost 100 fire trucks, along with 15 aircraft, battled the blaze throughout the day. Residents were told that it was too late to leave their homes. Heat from the bushfires was impacting the high voltage lines. There is very little rain forecast over the next few days.

So, it has all been a worry. But you wouldn't know, would you, that the fire is so close to the Lucas Heights nuclear complex? The latest maps shown on The Guardian and NSW Rural Fire Service websites don't really show how close this fire is getting to Lucas Heights. I have previously written about the safety hazards of Lucas Heights, with its reactor, cooling pond and accumulation of nuclear wastes — the amount of which is not publicly available.

Why Australia should shut down the Lucas Heights nuclear reactor http://t.co/mQHUfoGE4J. "... shut Lucas Heights down before we regret it."

The fires have reached about four kilometres from Lucas Heights. Embers carried by wind can form spot fires well ahead of the firefront — even up to 20 kilometres away. In the dense and rugged bushland, with predicted west to north-west winds up to 30 kilometres per hour – not forgetting that bushfires create their own weather systems – is not that hazardous to the nuclear complex?

But we don't hear a word about this. What makes the silence easier, is that the residential area previously part of Lucas Heights was renamed Barden Ridge in 1996 to increase the real estate value of the area, as it would no longer be instantly associated with the High Flux Australian Reactor (HIFAR) — and now the Opal nuclear reactor.

Map of bushfire from the NSW Rural Fire Service — note Bangor Bypass, roughly aligned with the south end of the fire. 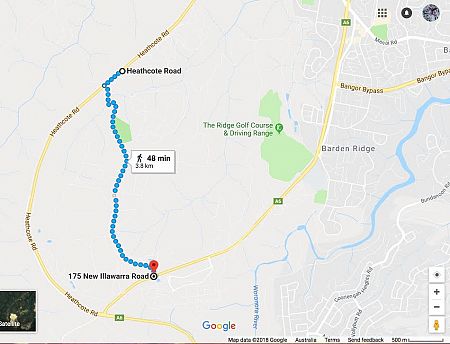 This separate Google map shows the rough position of Lucas Heights along Heathcote Rd, aligning with Bangor Bypass. In "walk" mode, the fire front is about 4kms from Lucas Heights. 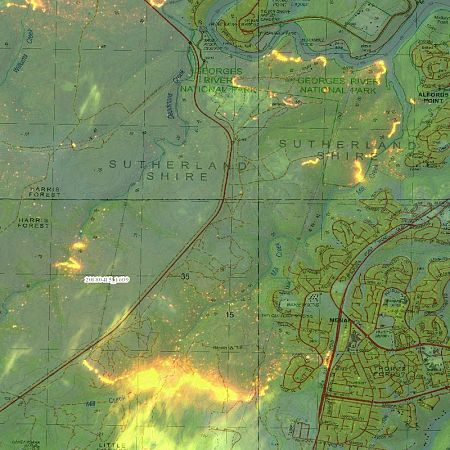 Of course, now, because of the name change, there's no public awareness that Australia's nuclear reactor is anywhere near the fires. You can bet that the Government wants to keep us all in blissful ignorance.

What we do know, is that fires are certainly a hazard to nuclear sites and there is the possibility of radiation release across a wide area, if fire invades a nuclear complex, with the fuel rods in cooling pools at great risk. When fires do happen near a nuclear site, there may be a security panic going on but that is not communicated to the public.

Whenever there have been wildfires threatening nuclear sites – in Russia, Europe or the U.S. – the pattern is to downplay, to not mention, the nuclear danger. The publicity pattern is always to ignore the radiation hazard.

For example, during the recent Californian wildfires:

“It's being fought by security site fire crews, with help from a helicopter able to detect any aerial release of radiation.”

As though any amount of monitoring is going to help or that any data would be publicly shared. Not a peep about the radiation numbers during the fires in and around Los Alamos, even though they were “monitoring” it.

And in the case of this fire in Russia, the emergency minister threatened to "deal with" those who spread radiation "rumours":

For the current Sydney bushfires, it seems as though there will have been a lucky escape for the communities, despite the fact that two giant aircraft, the DC10 Nancybird and the C130 Hercules "Thor" – normally used for aerial water bombing – were not available to help fight the Sydney fire, having been sent back to the U.S., because by March, the fire risk is supposed to be over.

It will have been a much luckier escape that they realised if the nuclear complex remains unscathed — this time!