Approval of the Shenhua coal mine in the verdant farmland of NSW's Liverpool Plains may be the last fatal miscalculation of the Baird Government, writes Lachlan Barker.

IN THE north-west of NSW another mining versus everyone else storm is growing. The Baird Government has approved a new, large,  coal mine, to be built in the centre of NSW’s most productive farmland, on the fabulously rich black soil of the Liverpool Plains.

Carmichael is slated to produce 60 million tonnes of coal a year which, depending on various factors – such as the price of coal and the production at other mines around the world – could make it the largest coal mine on Earth.

And, of course, adding 60 million tonnes a year of coal will only add to the already appalling greenhouse gas equation of Australia, which shows us far in the red already.

This mine in NSW is the project of Chinese company Shenhua and the locality is known as Watermark — thus the mine is known as the Shenhua Watermark mine. It is located south-west of Tamworth, the largest town in the area, some seven to ten hours drive north-west of Sydney. 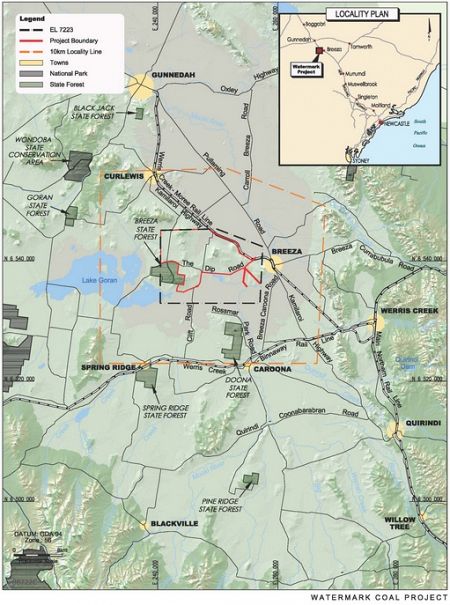 The first and most furiously frustrating part of the Shenhua mine project is that Australia does not need another coal mine. Many we have now are functioning below profitability due to the steep drop in world coal prices and some of the smaller, less efficient mines around the country are threatened with closure.

Approving the Shenhua mine may the last, fatal miscalculation by the Baird Government.

Previously, NSW's Baird Government – and before that, the O’Farrell Government – have been able to push through coal projects against the wishes of local residents and environmentalists as the Liberal's have held had a massive majority, and there were no elections looming.

But that was then, in the now, there is an election looming and the Baird Government’s majority is not as comfortable as it was.

The initial majority that Barry O’Farrell headed in parliament was 69 (LNP) to 23 (ALP), with one Green in the lower house. However, since then there have been eight Liberal MPs sent to the crossbenches via the investigations of ICAC. Latest polls indicate that NSW Labor, under new leader Luke Foley, has seriously closed the gap.

The same story, via the Sydney Morning Herald, 2 February, 2015, had this to say:

‘ALP would win 22 seats, taking their number to 45 - two shy of forming government.'

So things now are very tight. The major issue in this NSW election is privatisation, Mike Baird wishes to sell parts of the electricity network and, he says, plough the money back into infrastructure. This is, of course, now phenomenally risky, following the widely reported backlash against the Newman Government in Queensland when they tried the same thing.

The message from the Queensland election was clear — no privatisation. End of story. And note: the Newman Government had an even greater majority (LNP 73 – Labor 9) than Mike Baird has.

However, Baird may have been still in the favourite’s seat for the upcoming election — until Shenhua mine was approved.

And so the state of play now is that Baird was contemplating a close run thing, but was counting on the currently held 19 National seats to fall into line. However the message of Shenhua is clear, the Baird LNP Government now support mining ahead of farming and so those Nationals will have to counter those opposing privatisation, as well as the cries from rural voters:

Why should we vote for you, when it’s clear my farm is no longer safe under your government?

"A disastrous showing by the Nationals in Vic. could mean it loses its party status. Anyone…" — Sandi Keane http://t.co/SJmH8Ki2jy

This anger was visited upon Mike Baird when he visited Tamworth on 3 February this year.

A local group of protesters met him and gave vent to their anger over this mine.

The head of the Nationals in NSW, Deputy Premier Troy Grant, also met with protesters, saying of the meeting afterwards:

"It was a robust and well informed discussion with farmers from the Liverpool Plains."

I loved that “robust” bit.

Anyway, Grant and local  Nationals MP Kevin Anderson both tried to weasel out of the whole affair by asking for the water table analysis to be re-examined. If they were really aware their political future was on the line, they both would have said “we are flat out against this mine”.

For my own part, I gave both Anderson and Grant an opportunity to say exactly that.

I rang Anderson’s office and asked to speak with the press secretary, they took my number and – surprise, surprise – I have heard nothing since.

With Troy Grant, I contacted his office and they asked me to email my questions, which I did.

Is the NSW National Party for, or against, the Shenhua Watermark coal mine?

If for, is this not counter to the National’s mission statement of supporting agriculture first and foremost?

If against, will the Nationals be seeking to overturn the recently granted Planning and Assessment Commission (PAC) approval for this mine?

Again, needless to say, I have had no response.

Federally, Agriculture Minister Barnaby Joyce has spoken out against this Shenhua mine and is seeking to get Greg Hunt, who now has final say on the mine, to knock it on the head.

Also, Palmer United Party (PUP) senator Dio Wang has spoken against the mine, asking Mike Baird to overturn the approval for the mine to go forward. (Wang is a civil engineer, by the way, so he has credibility when he talks about potential problems with the water table.)

So the pressure is building, but this is not the usual fight – greenies in their macramé weave clothing against miners in high-vis shirts – it is part of the new political landscape. Farmers – traditionally staunch National Party voters – are now voicing their displeasure at what they may previously have seen as “their” Government.

Mike Baird may well once have said:

Well it’s gonna be tight, but I think we can scrape the privatisation thing through.

However, now with the Shenhua mine decision infuriating rural voters and throwing things in doubt for up to 19 members of his Government, he may have to think again.

It really is simple: if Mike Baird wishes to be re-elected premier of NSW, then stopping the Shenhua Watermark mine is now critical to his cause.

Gov't accused of "signing the death warrant for the Liverpool Plains" after coal mine approved http://t.co/YrcygplvTQ pic.twitter.com/PnAJiv0ycr