The essence of the case is that the NSW government has fast-tracked the project and are allowing Santos to build a water treatment plant and holding ponds without having to do a full Environmental Impact Statement (EIS).

Instead, the O’Farrell/Baird Government allowed Santos to get away with a Review of Environmental Factors (REF), which allows a much lower level of clearance and, crucially, does not allow public input for objections which is part of the higher level EIS process.

So, on the eve of the court case, to have discovered the hastily approved project is already suffering fatal engineering failure is concerning to say the least.

Thus, in approximate chronological order, here is what happened.

In March these photos appeared of the holding/evaporation ponds at the Leewood facility. 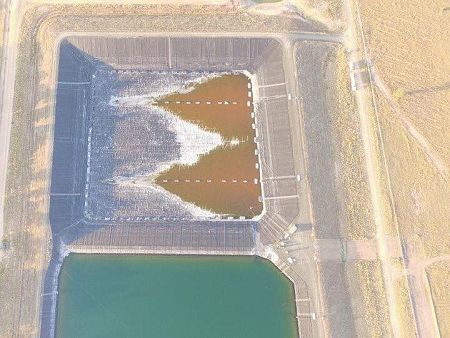 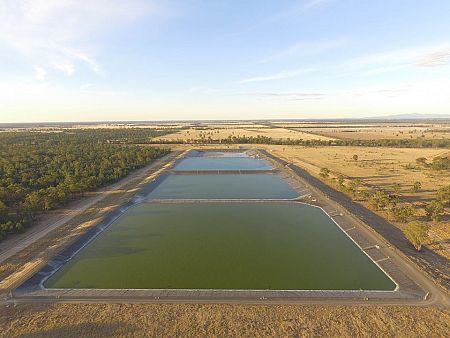 As you can one of the cells is empty, or near to empty and the question began to be asked of Santos on social media was: where has the water gone?

The first major fear was that the pond was leaking.

This project sits atop the Great Artesian Basin (GAB) and so that risk was to great to be borne. Sticking giant needles hundreds of metres through the Earth and threatening the ecologically unique GAB to harvest CSG is a risk that Australia just cannot afford.

The idea now that toxic CSG produced water – possibly 150 million litres of it – was leaking out of the pond had set alarm bells ringing for locals.

To demonstrate what happens when CSG water escapes from this project, here are some images of the site of an overflow spill in 2011, when the project was owned by Eastern Star Gas, before Santos purchased it. 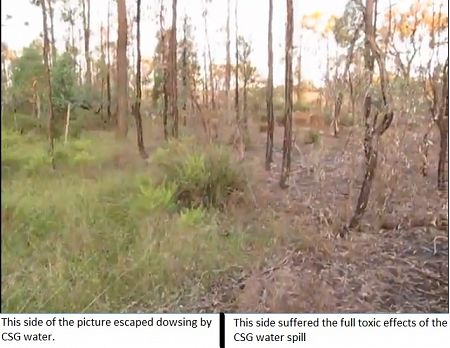 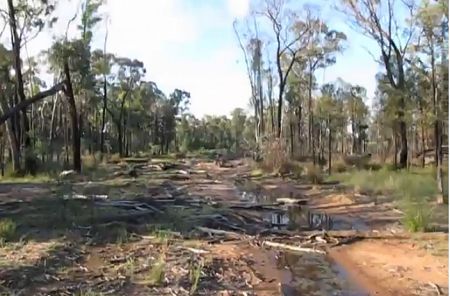 Below is a picture taken this year: 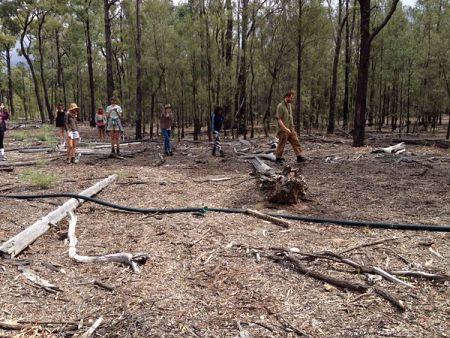 As you can see, five years later, there is little or no regrowth, although Santos claim they have spent $17 million on rehabilitating damaged sites in the Pilliga.

Clearly, whatever was in the water that spilled here is nasty stuff.

So knowing how bad this water was, I set out hot foot to write an article on it, however I had hardly put pen to paper when it occurred to me first thing had better be to make sure the NSW Environmental Protection Agency (EPA) knew about this.

So I contacted the EPA, discovered it hadn’t been reported and so I reported it. I realised I am a citizen of the democracy of NSW first and a journalist second.

Then, a week or so after the initial report, I spoke to an EPA inspector who examined the pond directly and she told me that the primary liner was defective and so Santos had pumped the pond out while they (presumably) fix the liner.

So, it was with considerable surprise that I saw this on the EPA’s media release website: 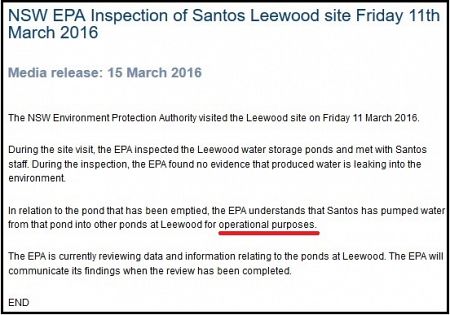 This gives the impression of a calm lucid decision to move the water around for some “operational” reason. However, a failing liner is definitely not that.

This Leewood facility is supposed to be state of the art and the project is meant to have an operational life of 25 or more years. If the liners of the ponds are failing after less than three years of operation, it doesn’t give much confidence in a) the liners in the other three ponds; and b) the liners’ ability to withstand 25 years of operation.

The screen grab below is from the Santos Review of Environmental Factors for the Leewood water treatment facility dated 2013.

And I might add: ‘the EPA understands’ is less than confidence inspiring. The citizens of NSW would prefer the EPA "knows", not just blithely accepting everything Santos tell them.

Now Santos will, no doubt, argue there is no problem here. If another liner is found to be defective then we will just pump that pond out and fix that liner.

However, this is clearly not acceptable. There is already controversy over whether these ponds can take the waste from the Leewood plant as it is.

The project is currently in the exploration phase, with 20 or so wells producing gas. In full production, Santos are planning 850 wells in the Pilliga.

These wells are to produce 1.5 gigalitres (GL) of produced water a year, the ponds capacity is 600 million litres (0.6 GL).

The reverse osmosis treatment is said by Santos to reduce this amount of water by 80-85%, leaving a heavily salty brine solution to be stored in the ponds. LandWaterFuture estimate 0.5 GL of brine will be produced over the five year exploration phase, all to be stored in these ponds.

So, if these ponds are near full to the brim with brine, if a liner fails in one of the ponds, what then? They cannot pump the brine into another pond as the other three won’t have the capacity available.

And of course what if two liners in separate ponds fail at the same time?

And what if there is a problem with the RO plant and it has to shut down for maintenance/repair? Presumably, the constant stream of water from the wells will have to be poured into the already groaningly full ponds to await RO processing.

Also, as a side note, the locals accuse that these ponds are evaporation ponds, which are now illegal, it is to be hoped that comes up in the court case as well.

So why has this liner already proved defective? Well, the engineers tell us that polyethylene liners often don’t do well when forced to cope with high salt loads and high UV exposure. 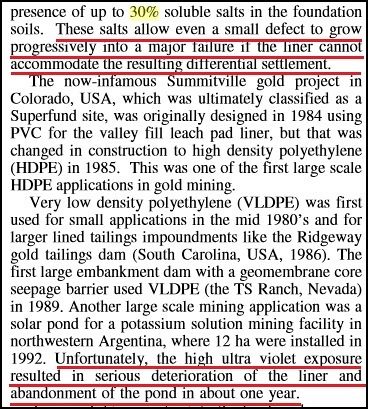 It seems, then, that the very design of this project using a polyethylene liner cannot work. It is supposed to store salt/brine; a problem, and I can assure you the north west of NSW, those sun burnt plains, get a great deal of UV exposure — another problem.

The final note on that is that, even with all going well for Santos, after the water in the brine solution evaporates away, then Santos will still be left with large amounts of crystalline salt to dispose of and they still don’t have a solution for that.

No waste disposal/landfill will take it in NSW. If they truck it to Queensland, as has been suggested, then that adds some unknown number of truck trips a week to Santos’ production costs.

Given the project already cannot make money, this is a something Santos literally cannot afford.

In the end, it is clear the pond system Santos have set up at Leewood simply cannot work, either in an engineering sense, or in a simple volumetric sense.

This highlights why the locals, represented by the Environmental Defender’s Office (EDO) are taking Santos to court.

It is long past time this project was halted and Santos are ordered to do an EIS.

An EIS for this project will show fully what the vast bulk of the Pilliga locals have been screaming for years — this project cannot work.

It is a long past time it was ended forever. Let us hope the court hears that and agrees.