THE SOUTH Australian Parliament is holding a Joint Committee on Findings of the Nuclear Fuel Cycle Royal Commission (NFCRC).

The five committee members, with one exception, the Greens Mark Parnell, have pro-nuclear opinions. I thought that it was going to be just a rubber stamp for the NFCRC. Now I am not so sure. The committee gave the NFCRC a grilling on the economics of the plan to develop a nuclear waste import industry in South Australia.

Answers indicated that the NFCRC is keen to have discussions with other countries before the matter is resolved at the political level.

Like Brian Martin, Kevin Scarce, head of SA's Nuclear RC, also has a conflict of interest so why no outcry? https://t.co/HgRjwDWNW8

Trawling through the 173 pages transcript of hearings of this committee, I was surprised at the rigour of the questioning of witnesses by the politicians. They did ask hard questions about the arrangements for contracts from overseas countries, customers sending radioactive wastes to South Australia. They asked questions about who pays and when, and for what aspects of the process.

The most intensive questioning of witnesses was certainly on that subject of economics. After all, the plan is to make a financial bonanza for the state. There is no other reason for it. I sensed that the parliamentary committee was indeed focussed on this one basic question:

If it's not going to make money, why do it? 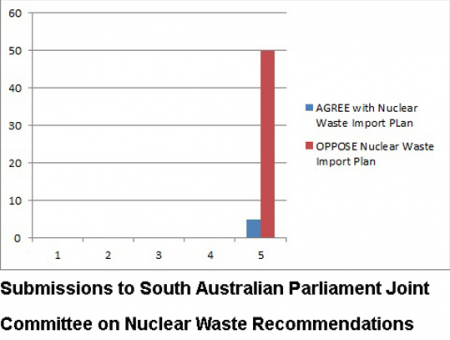 The committee particularly grilled Dr Tim Johnson, from the Jacobs Engineering Group, the firm who provided the financial reports for the NFCRC. He was clear on which countries would NOT be customers — most of the EU, Russia, China, North America. He was vague on what countries might be customers. He mentioned Taiwan:

There are some people who think it may be that the Chinese will encourage the Taiwanese to send it to China. We don't know.

Dr Johnson went on to rather confusing statements about the contractual arrangements, and particularly about at what stage revenue would come to South Australia. I don't think that the committee was inspired with confidence as Johnson discussed this. It was a very lengthy discussion. A few extracts illustrate the economic problems that were revealed in this discussion:

Can I assume from this, then, that the contractual agreements with the international partners — the customers, essentially — all happen before year one?

Oh no, we would select any contractual obligations with partners to happen in year six (he later suggested year 11)

the risk of actually obtaining commitment, or not, from countries — have you got a comment on that?

The only comment I could make is that we just don't know. Until we actually have some fairly informed conversations with those countries

When would you suggest that we need to be having those conversations — at what point?

As soon as possible.

Before you sign those contracts in year 6, you have to be very secure.  ...We could have a scenario where a super Fukushima, for want of a better description—and please don't quote me in those words—but a very significant action has occurred and nuclear power is stopped globally.......so what you need to do is have contracts for waste which already exists and have those contracts signed up before you make that decision. Then, you are protected against any downside in the nuclear power industry.

You have to assume that your lawyers are experienced and you've actually signed up a contract that is enforceable.

That was a rare mention of the probability of a serious nuclear accident happening - who knows when? It raised the spectre of the expected nuclear waste bonanza suddenly fizzling out, after South Australia had committed to building the nuclear waste repository

I think the big concern for me would be the construction cost of the facility.

But the critical point is the first shipment and your first bunch of contracts because everything hinges on that. Essentially, the project will become a success or a failure based on that first 15,000 tonnes.

Exactly, and if you don't get that 15,000 tonnes plus whatever margin you think is appropriate at the time, that's when, I'm afraid, you write off your investment.

Which at that point is a disaster.

Yes. It isn't a risk-free process to go into this. There is a very significant risk.

What we can identify from the Finland experience is that you need a very long time. We've made an assumption that you can get the facility up and running around 20 years after this financial investment decision. That's an assumption.

....my question is: if it is a 40-year project, which means 2057 is when you start deep burial of the waste, at what stage, in a 40-year timeline, do you start receiving, as a state, the sums of money up-front?

At this stage, Dr Johnson seemed to get a bit rattled:

In essence we are spending money up until we start signing the contracts, and at this stage on the 28-year timeline that occurs at year six-ish, but if it's a 40-year timeline and there are delays, then it may well be that you keep spending money and you don't get the precommitments until later than year six. : I am not an economist; I am a chemist. Quite clearly, we were not looking at this from an economic perspective. Our remit was to look at it from a financial perspective.

The committee members were not the only ones worried about the economic aspects of the NFCRC's recommendations. Despite the short period allowed for submissions, 55 submissions were received.

Five of these supported the plan, while 50 opposed it. Some comprehensive and detailed submissions included a critique of their economics, e.g; from Dr. Mark Diesendorf, Mothers For a Sustainable South Australia, Carol Phillips and leading environmental organisations.

At the risk of being crticised for "lack of facts", I'd like now to quote from one quite long submission that I found persuasive. This is from Kristen Jelk, who asks:

Who is talking about “Brand South Australia”?

In May this year I was in China promoting an Australian product that comes from South Australia. It is well known that Brand SA is strong in China where it is pitched as a clean, green, environment offering high quality products. The full potential of the market in China for South Australian produce is immeasurable. From a Chinese consumer’s point of view, the environmental conditions where the product is sourced or grown, is pivotal to the choices made when purchasing. Chinese consumers will pay top prices for products that are considered SAFE - produced where the source is known to be an unpolluted clean environment. This is reflected in markets throughout Asia.....

If SA is pitching safe products to an international market, and it becomes known that this Australian state has established a dump for nuclear waste, then the damage to brand SA will be immeasurable....It will not matter that the dump is in a desert, nor will it matter if the dump is a distance from prime agricultural land, nor will it matter if experts assure of safety standards. The perception that would prevail is that SA will be a dumping ground for nuclear waste. Perception is everything....

China is our largest trading partner. At present, Australia has clear marketing opportunities in China, and for our other nearer neighbours. In assessing the so called golden coin to be gained for bringing in radioactive trash, South Australia needs to also consider the other side of that coin — the economic opportunities that could be lost, along with the risk of a poor or no return on the waste facility investment.

The dirty, pro-nuclear terms of reference and campaigning behind the high risk plan to collect nuclear waste. https://t.co/r8njOHNNLe