The South Australian government’s royal commission into our nuclear future is a farce, and a dangerous farce, warns Noel Wauchope.

FIRST OF ALL, it is not the province of one State to determine by a State royal commission that a nuclear industry should be introduced in Australia. That is a protected issue as a 'A Matter of National Environmental Significance' under the National Environment Protection and Biodiversity Conservation Act 1999.

Secondly, this royal commission would be a mammoth waste of money for South Australia, The cost would run into hundreds of $millions. The Royal Commission into Institutional Responses to Child Sexual Abuse was allocated over $434 million in 2013 for its first four years of operation. Given that nuclear issues are the province of national law, not South Australian, this is a totally unnecessary expense.

Thirdly, the 'public involvement' in the terms of reference for this royal commission is a farce in itself. Just look at how this was dealt with by the South Australian government:

The announcement was made. Despite the fact that this whole initiative is clearly of national importance, it has received minimal publicity outside Adelaide. The Adelaide Advertiser ran a poll. The Adelaide Advertiser is pretty much regarded as the nuclear lobby's free propaganda vehicle. No surprise if their readership turns up the required positive result.

Consultations began on the Terms of Reference for the royal commission. Premier Jay Weatherill touted nuclear power for climate change action, though he said it was not economically viable. The better options, he said, were importing and storing radioactive waste, and uranium enrichment.

Pro-nuclear former governor, Kevin Scarce, was appointed as “independent” head of the inquiry. No mention of what scientists, etc. might be on the panel. 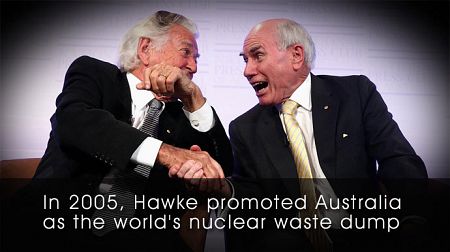 There is no need for a royal commission into the nuclear industry for Australia. Nuclear proponent, Ziggy Switkowski, concluded in the 2006 Switkowski Report that the industry is not economically viable here. Nuclear reactors often far exceed their construction budgets. The last nuclear power plant built in Canada cost AUD$15.1 billion.

Mr. Switkowski predicted the capital cost at $4-6 billion for our first 1000MWe reactor.

However, we already know that, despite some pious statements by Jay Weatherill about nuclear power’s ability to reduce greenhouse gas emissions, action on climate change is not the motivator for this new inquiry.

According to a report by The Australian on 10 February 2015:

‘He [Premier Jay Weatherill] said he was open to the prospect of remote parts of the state hosting a nuclear waste deposit but played down the prospect of a power plant being built.

"I think that's the least likely outcome of the royal commission," he told ABC radio on Monday.

"I think what's most likely is that it will be regarded as not viable for either the state or the nation." '

In the same interview on ABC's The World Today, Weatherill's enthusiasm for storing the world's nuclear waste is clear:

"The threat of climate change, the fact that we're already in the nuclear industry but we don't get full benefits from it because we just send ore overseas in an unprocessed form and we don't accept the by-products, the waste associated with the ore that we send away.

So all of those things represent opportunities.” 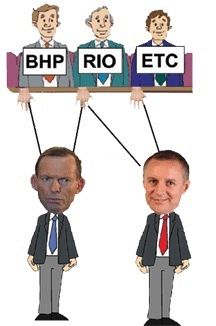 The big emphasis on importing radioactive waste is a joke — a very dangerous joke, and becoming more so. With climate change, extreme weather events are already happening more often and are more severe. It is probable, though not proven, that the loss of the Malaysian aircraft over the Indian Ocean was caused by extreme weather.

The long-term danger of transporting highly radioactive waste from the U.S., Europe, or wherever, for the short term benefit of a few greedy entrepreneurs in this country is a risk that Australia does not need to take.

Admittedly, Australia is contractually bound to take back a relatively small amount of high-level nuclear waste from Lucas Heights that was formerly stored in France. Common sense would indicate that this nuclear reactor should be closed, and no further waste created.

The Lucas Heights waste could be stored close to that site.

In the current climate of extreme lack of trust between the Australian public and its politicians, Jay Weatherill's about-face on nuclear issues will not help Labor and I doubt that the public will have any faith in this rather secretly and hastily organised Royal Commission.

Some of us had time to put in a submission to the South Australian Government on the Terms Of Reference.

To the Attorney-General Department,

Foodstuffs from Australia are known to be clean and radiation free. This status would be threatened by nuclear operations and lose Australia's reputation for clean food exports. Nuclear environmental damage also threatens our tourism industry.

Nuclear waste. The Royal Commission must look widely at nuclear waste management in South Australia, including uranium tailings. The Commission should examine proposals to host international nuclear waste and status of the waste industry globally.

Safety. Though nuclear accidents are rare, their consequences are catastrophic. Terrorism is a risk — nuclear facilities and transport of radioactive materials are becoming an attractive target for terrorist attacks.

Climate change. Climate change is causing sea levels to rise which, in turn, would threaten nuclear facilities near the coast, such as at Port Adelaide. Risks of storm surges and even tsunamis cannot be discounted. Climate change will increase droughts, adding to the water shortage problems that already beset the nuclear industry.

Climate change brings extreme weather, with greater risk to transport. The recent Malaysian airliner disappearance in the Indian Ocean was almost certainly due to an unprecedented extreme weather event. As we must expect more of these extreme events, this brings into question the danger of transporting radioactive wastes over long distances.

Australia is contracted to take back a relatively small amount of radioactive waste that originated from Lucas Heights. That is hazard enough, without contemplating an international waste repository as an import business.

Legacy sites. South Australia’s contaminated nuclear sites including Maralinga, the Port Pirie Uranium Treatment Complex, and Radium Hill. There are unresolved concerns over the status of these sites (in relation to public health and environmental impacts) and the Royal Commission provides an opportunity to finally resolve these issues.

Insurance, financial risk, public liabilities and subsidies. A comprehensive examination of the potential liability of the SA Government in the case of an incident or accident is needed.

Exploration of alternative energy sources to address the challenge of climate change, including the potential for growth in renewables and other low carbon technologies 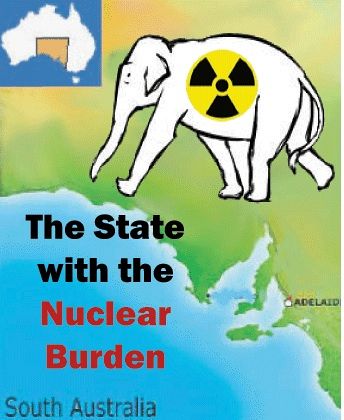 Also read Sandi Keane’s investigation into the Howard government's ‘cradle to the grave’ fantasy of turning Australia into the world’s nuclear waste dump (including plutonium from the U.S. weapons industry.