Brazil proclaimed that it would be hosting Rio's green Olympics. Despite some bright spots, the result was disappointing Climate News Network's Brazil correspondent, Jan Rocha, says.

SÃO PAULO, 24 August, 2016 — In its victorious bid to host the 2016 Olympic Games, Rio de Janeiro  promised “Green Games for A Blue Planet”. It presented an ambitious list of targets.

The city said 80% of the sewage flowing into the waters around the city, the Bay of Guanabara, would be treated, public transport would be improved to reduce air pollution, ecosystems would be preserved, and  conditions in the favelas, or shantytowns, where a quarter of the city’s population live, would be upgraded.

Jay Coakley, professor emeritus of sociology at the University of Colorado, who has studied the environmental impacts of mega-events, says:

“The International Olympic Committee (and FIFA) understand that one of the big objections to these mega-events is that they destroy the environment, so they put in these requirements. But then what do they do? They can’t enforce them. There´s no accountability.”

The Rio Games are now over. Records have been shattered, medals have been won, and Rio has dazzled visitors with its breathtaking beauty. But did the city deliver on all those ambitious pledges? 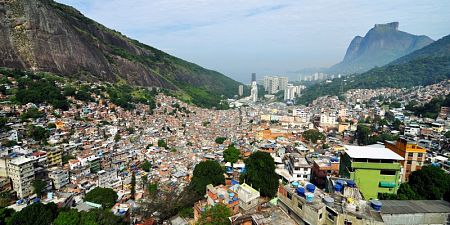 Cleaning up the spectacular Guanabara Bay, scene of the sailing and windsurfing events, was always going to be the most challenging. There were fears that any athlete unlucky enough to fall into the water was at risk of contracting hepatitis, mycoses (a fungal infection), or gastro-intestinal diseases.

In spite of that, only one of the five sewage treatment plants planned was actually built and instead of 80%, only 48% of the sewage was treated. Biologist Mario Moscatelli, who has been monitoring the Bay for years and helped the Rio government draw up its sewage treatment plan, is deeply disappointed.

“I believed that the Brazilian authorities would follow through on the promises they made in front of the whole world, not just to Brazil.”

Restoring the Bay, he says, just needed political will and good management.

Reducing the city’s air pollution by means of better public transport was another bid promise. The Metro has only 36 stations, while Rio’s streets are clogged with cars and buses pumping out exhaust fumes.

A new Metro line from the wealthy South Zone to the main Olympic site was built and opened a few days before the Games began —but it does little to alleviate problems in the most congested areas, and nothing to help the daily commuters in the overcrowded suburban trains.

A sleek VLT (light rail) tramway was inaugurated to connect Rio's financial section to the domestic airport — good for bankers and tourists, but, again, not much use to the general population or in reducing air pollution.

Preserving ecosystems had been another promise. Instead, two of the Olympic projects invaded protected nature reserves.

Although Rio already has two golf courses, a brand new golf links was built inside the Marapendi nature reserve, a mangrove and wetland area, home to many animal and bird species. Golfers exclaimed with delight when they caught sight of capybaras and owls on the course, apparently unaware that they were invading their habitat.

A new motorway, the Transolímpica, linking two of the Olympic sites, was driven through the Pedra Branca park, located in a remnant of the Atlantic Forest, Brazil’s most threatened biome (a region sharing similar climate, animals and plants). The Forest has already been reduced to 8% of its original size.

To offset the estimated 3.6 milllion tonnes of CO2 generated by the Games, Rio had also promised to plant 24 million seedlings, creating a new urban forest. During the opening ceremony, each of the 11,000 athletes was handed a symbolic seedling. So far only 5.5 million have actually been planted.

https://t.co/IuTZrNvJU1 The Olympics in Rio are having a devastating effect on the environment. Go to @Fabswapp now pic.twitter.com/Z9Q7kPWMsf

The promise to improve favela conditions was simply abandoned. Instead, many communities were forcibly removed to make way for Olympic projects — hardly a triumph for Rio's green Olympics.

There was more success with recycling. 240 of the city’s dirt-poor waste collectors were employed to collect recyclable waste from the Olympic Village. Much of the surplus food was delivered to poor communities.

And the athletes may not have known it, but their bronze and silver medals were made from recyclable material like mirrors and car windows. Even the ribbons were partly made from plastic bottles.

The gold medals were guaranteed 100% free of mercury, which is often illegally used to extract gold in the Amazon and contaminates the water courses.

But it is not only Rio which has failed to live up to its green promises. London promised the “greenest” Olympics ever, with zero carbon and zero waste, but did not escape criticism for its actual performance in some sectors. And the Sochi winter games in Russia left natural ecosystems damaged by construction work and abandoned landfill sites.

Jan Rocha is a freelance journalist living in Brazil and is a former correspondent there for the BBC World Service and The Guardian.

Rio 2016: Brazil goes green for the Olympics. Well, at least the pool did!