On climate, humanity must rise up against 'collective shrug of fatalism'

As a top editor expresses regret for his newspaper's lack of climate coverage, a documentary film explores the destruction – and potential hope – spawned by planetary crisis. Jon Queally from Common Dreams reports. 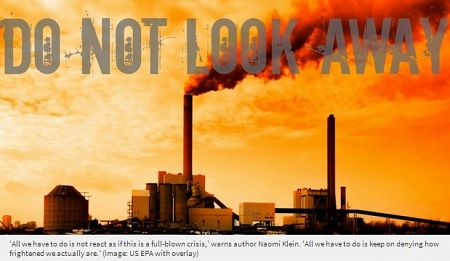 ALONGSIDE AN announcement by The Guardian's editor-in-chief Alan Rusbridger on Friday, in which he said climate change stands out as perhaps the single most important issue now facing humanity – one he says his outlet could have done a more aggressive job of covering in recent years – the newspaper has kicked off a new series of special coverage on global warming by publishing an excerpt from author and activist Naomi Klein's latest book, This Changes Everything, alongside a sneak-peek of the documentary film by the same name directed by Klein's husband, Avi Lewis.

According to sentiments shared by Rusbridger and expressed in both the film and the book, Klein and Lewis argue climate change, if properly understood, "could become a galvanising force for humanity" if a more appropriate response can overcome the pervasive denial, fear, and helplessness associated with the issue.

Watch the ten-minute excerpt from Lewis' film – the final version remains in-progress – which explores the destructive path on which modern civilization treads, while also connecting the dots between the various movements which constitute humanity's best hope for continued survival and future prosperity:

In his missive to readers – Climate change: Why The Guardian is putting threat to Earth front and centre – Rusbridger announced his pending retirement and explained that after 20 years as editor he had few lasting regrets save this one:

"... that we had not done justice to this huge, overshadowing, overwhelming issue of how climate change will probably, within the lifetime of our children, cause untold havoc and stress to our species."

For many years, environmentalists, the scientific community, and critics of the corporate and mainstream media have pointed out that newspapers and news television programs have done far too little in providing quality coverage and explanation of the slow-moving yet existential crisis posed by the warming of the Earth's atmosphere and oceans caused by the steady accumulation of greenhouse gases and carbon emissions.

Exploring at least the partial explanation for that shortcoming, Rusbridger writes:

There may be other extraordinary and significant things happening – but they may be occurring too slowly or invisibly for the impatient tick-tock of the newsroom or to snatch the attention of a harassed reader on the way to work ....

There may be untold catastrophes, famines, floods, droughts, wars, migrations and sufferings just around the corner. But that is futurology, not news, so it is not going to force itself on any front page any time soon.

Even when the overwhelming majority of scientists wave a big red flag in the air, they tend to be ignored. Is this new warning too similar to the last? Is it all too frightening to contemplate? Is a collective shrug of fatalism the only rational response?

The climate threat features very prominently on the home page of the Guardian on Friday even though nothing exceptional happened on this day. It will be there again next week and the week after. You will, I hope, be reading a lot about our climate over the coming weeks.

Crediting his team of environmental and science writers, Rusbridger made clear it is

'... not that the Guardian has not ploughed considerable time, effort, knowledge, talent and money into reporting this story over many years'.

However, he said a deeper look in the coming weeks will attempt to focus on two underlying and vital aspects of the climate debate.

First off, the coverage will look at

'... what governments can do to attempt to regulate, or otherwise stave off, the now predictably terrifying consequences of global warming beyond 2C by the end of the century.'

'... can prevent the states and corporations which own the planet’s remaining reserves of coal, gas and oil from ever being allowed to dig most of it up.'

Alongside the nearly ten-minute sneak-preview of the documentary film, The Guardian also published this extended excerpt from Klein's award-winning and best-selling work, This Changes Everything, which discusses her own struggle with climate denialism and reads in part:

We know that if we continue on our current path of allowing emissions to rise year after year, climate change will change everything about our world. Major cities will very likely drown, ancient cultures will be swallowed by the seas, and there is a very high chance that our children will spend a great deal of their lives fleeing and recovering from vicious storms and extreme droughts. And we don’t have to do anything to bring about this future. All we have to do is nothing. Just continue to do what we are doing now, whether it’s counting on a techno-fix or tending to our gardens or telling ourselves we’re unfortunately too busy to deal with it.

All we have to do is not react as if this is a full-blown crisis. All we have to do is keep on denying how frightened we actually are. And then, bit by bit, we will have arrived at the place we most fear, the thing from which we have been averting our eyes. No additional effort required.

There are ways of preventing this grim future, or at least making it a lot less dire. But the catch is that these also involve changing everything. For us high consumers, it involves changing how we live, how our economies function, even the stories we tell about our place on earth. The good news is that many of these changes are distinctly uncatastrophic. Many are downright exciting. But I didn’t discover this for a long while.

This changes everything: Capitalism vs. the climate, an excerpt from @NaomiAKlein http://t.co/E5v61ZKRFj

Operating as narrator in the new film – which expands, visualizes, and in many ways personalizes, the many themes of her book – Klein speaks amid footage of recent climate protests and other popular uprisings from across the globe as she posits key questions and offers a thesis of hope to the viewer.

"we realized that real disaster response means fighting inequality and building a just economy — that everyone working for a healthy food system is already a climate warrior? So too, are people fighting for public transit in Brazil; housing and immigrant rights in the United States; battling austerity in Europe; extraction in Australia; pollution in China and India; environmental crime in Africa; and the bad trade deals that lock in all these ills everywhere."

"I believe the movement we need is already in the streets; in the courts; in the classrooms; even in the halls of power — we just need to find each other. One way or another, everything is going to change. And for a brief time, the nature of that change, is still up to us."

Help get the truth out there. Subscribe to IA for just $5 a month or $50 a year.