At the start of 2020, Bulletin of the Atomic Scientists moved its Doomsday Clock to 100 seconds to midnight — the closest to midnight, doomsday, since the clock started in 1947.

There are two gargantuan threats — the climate crisis and nuclear weapons/nuclear power.

The only realistic way to secure a future for the world without nuclear war is for the entire planet to become a nuclear-free zone — no nuclear weapons, no nuclear power. A nuclear-free Earth.

How did India get an atomic bomb in 1974? Canada supplied a reactor and the U.S. Atomic Energy Commission provided heavy water for it under the U.S. so-called “Atoms for Peace” program. From the reactor, India got the plutonium for its first nuclear weapon.

Any nation with a nuclear facility can use plutonium produced in it to construct nuclear arms.

Can the atomic genie be put back in the bottle? Anything people have done other people can undo. And the prospect of massive loss of life from nuclear destruction is the best of reasons.

There is a precedent: the outlawing of poison gas after World War I when its terrible impacts were tragically demonstrated, killing 90,000. The Geneva Protocol of 1925 and the Chemicals Weapons Convention of 1933 outlawed chemical warfare and to a large degree the prohibition has held.

There are major regions of the Earth – all of Africa and South America, the South Pacific and others – that are Nuclear-Weapon-Free Zones based on the United Nations provision for such zones.

Radical? Yes, but consider the even more radical alternative: a world where many nations will be able to have nuclear weapons because they have nuclear technology. And the world continuing to try using carrots and sticks to try to stop nuclear proliferation — juggling on the road to nuclear catastrophe.

As for the connection between purportedly “peaceful” atomic energy and nuclear weapons, physicist Amory Lovins and attorney Hunter Lovins spell it out well in their book Energy/War: Breaking the Nuclear Link.

'All nuclear fission technologies both use and produce fissionable materials… Unavoidably latent in those technologies, therefore, is a potential for nuclear violence… Little strategic material is needed to make a weapon of mass destruction. A Nagasaki-yield bomb can be made from a few kilograms of plutonium, a piece the size of a tennis ball... [And a nuclear plant] annually produces hundreds of kilograms of plutonium.'

There must be, say the Lovins, "civil denuclearisation".

As to the claim that energy generated by nuclear power plants is necessary — that’s false. Safe, clean, green, renewable energy – led by solar and wind technologies – is available to provide all the power that the world needs.

Of the assertion that nuclear power is carbon-free — that’s untrue. The nuclear fuel cycle – mining, milling, enrichment – is carbon-intensive and nuclear plants themselves emit radioactive Carbon-14. 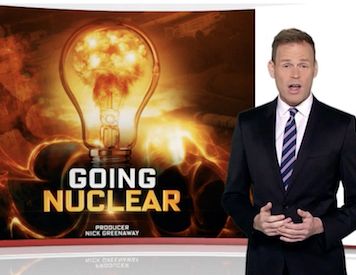 A recent 60 Minutes program was nothing other than an infomercial for the pro-nuclear lobby.

It took decades of struggle to make the place where I live – Long Island, New York – nuclear-free. The Shoreham Nuclear Power Plant was stopped and the six to ten more the Long Island Lighting Company wanted to build, prevented. The two reactors at Brookhaven National Laboratory leaking radioactive tritium into its underground water table have been shut down.

On this 50th anniversary of Earth Day, let us strive for the goals of defeating global warming and having all the Earth nuclear-free. These are existential threats that must be overcome.

A version of this article was given as a presentation at the Long Island Earth Day 2020 Program on 21 September.