As a new film about the tactics of climate change denialists is released in the United States, leaked emails by these same people further underscore the movie's message. Kevin Grandia from DeSmogBlog reports.

Merchants of Doubt, a new film from Food Inc. director Robert Kenner, hit the big screen this month in the Unites States and it is already making controversial headlines as the climate deniers go on the attack, as predictably as possible.

Merchants of Doubt zooms in on the anti-science campaign outlined in Naomi Oreskes' book of the same name, and has some pretty shocking and frank interviews with some of the more colorful and influential operatives in the climate denier movement.

Apparently the film sent such a wave of indigestion through the climate denial cabal that, back in October, S. Fred Singer and a small group of his chosen deniers and PR spindoctors discussed via email the opportunity to sue the film into oblivion.

Director of "Merchants of Doubt" says the goal of the movie is to reveal hidden agendas of #climate change deniers http://t.co/BwOBBpsXqg

One of the recipients of the Singer email is James Enstrom (a researcher skewered in the media decades ago for his skeptical views on the links between tobacco smoke and cancer, while at the same time he collected checks from Phillip Morris) who suggests that Singer go on the attack before considering any legal action:

The film debuts across the country earlier this month and no lawsuits have arrived on Dr Oreskes' or Robert Kenner's doorsteps, although a stern letter of warning from Singer to Kenner was sent last week and subsequently published here on the blog maintained by the Center for Tobacco Control, Research and Education.

But nonetheless, this email string is important in that it shows clearly that there is a small group of climate deniers colluding behind the scenes to stifle their critics in a coordinated way.

The casual language and easy offers of assistance make it clear that this is a group that is familiar to each other and has coordinated together in the past: 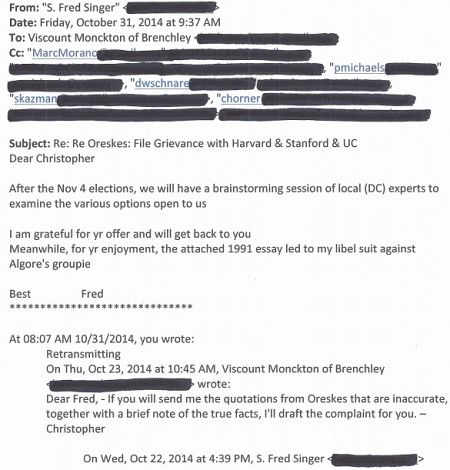 One of the recipients of the Singer email, Marc Morano, offers up a poignant interview in Merchants of Doubt, making it clear that he revels in his leadership role amongst climate deniers and his view that it is not scientific fact that wins the day, but who wins the communications war in popular media.

Here's the official Merchants of Doubt trailer, which heavily features Morano, who I have to say (or would like to think) will someday look back with deep regret for his complete lack of respect for science and academic endeavor. Or at least he might be embarrassed by it:

This story was originally published on the DeSmogBlog under the title 'Merchants of Doubt Film Debuts, Textbook Denial Attack Campaign Led By Fred Singer Ensues' and has been republished with permission. Click here to tweet out a link and spread the word about 'Merchants of Doubt'.