Have solar households really sold out on their environmental goals?

LAST WEEK, the head of the Queensland network operator Energex attracted some attention when he suggested that solar  households had lost sight of their environment agenda because they were using more power from the main grid than those without solar.

What’s the point of solar, CEO Terry Effeney wondered out loud at a Brisbane business luncheon, even on the future of electricity, if it wasn’t reducing demand and reducing the amount of coal-fired generation? And he used this graph (below) to illustrate his point. 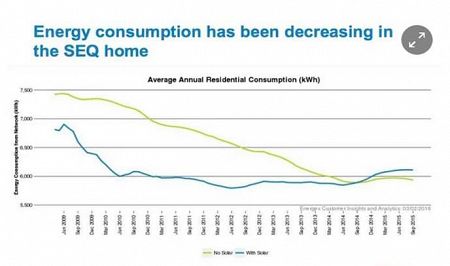 According to comments reported by The Guardian (and said to be a fair summary by the folk at Energex), Effeney said solar-powered households,

don’t worry so much about their bill now [and] are actually using more electricity off the network on average than people who haven’t got solar [who] are still worried about their electricity.

Could we have imagined that that would have occurred, when the whole point of putting solar in was more about a green outcome?

What you’ve got now is all about price … people who have solar are not worrying and are happy to leave their air-conditioning on and that’s really counter to what you were expecting to be a green agenda.

But is that really a fair portrayal of what is going on in the electricity market and in solar homes and others? Many are not so sure. The actual graph is not in dispute but the interpretation is.

One of the problems is that there are no direct comparisons … of, say, big families with a lot of energy use, using solar or not, and people who live in apartments, or pensioners, and using solar or not. And it doesn’t compare houses before they had solar and afterwards.

All these factors can influence what this data actually means but let’s look at what we know.

The yellowish/green line shows consumption from the grid by non-solar households. It indicates a big fall over a five year period before flattening out.

Five years ago, there was a big difference between non solar and solar households. Now there has been a cross-over. There could be several causes for this — the uptake of energy efficiency and “bill shock” in reaction to the soaring grid costs could have begun that fall.

It could also be that the biggest electricity users also took up solar. When you take out the biggest users, that reduces the average for the remainder. The fact that it is flattened now suggests that maybe the remaining households have run out of ways to cut demand.

The blue line (solar households) is effectively the energy required from the grid for a customer with solar PV, that the solar can’t supply.

It also showed a big fall in demand from the grid, which could mean that more energy efficiency measures were used, and also that the size of the systems increased, from an average of 1.5kW to 4kW.

That meant that most daytime demand (which is around 1,500kWh a year) is supplied by solar. The 6,000kWh roughly equates to evening, night and early morning demand.

There is a further complication. Even those houses with more solar than they need have no incentive to move demand (such as pool pumps, air conditioning and other appliances) to the daytime when it could be supplied by their rooftop solar, because of the structure of the tariffs — particularly the 300,000 on the premium feed in tariff.

They get 44c/kWh for solar exported to the grid, and a lot less for imports. It is totally different to whether the solar households are helping reduce coal consumption. On Energex own evidence, they do, because they now account for 7.4 per cent of total demand.

The premium feed in tariff is a perverse incentive and one that would require some clever thinking to get around. A recent suggestion by the Queensland Productivity Commission to simply end them was dismissed straight away.

But there may be alternatives. Ergon Energy suggested a “buy out” of feed in tariffs — trying to find a way that did not penalise the solar households but did align the tariffs and incentives that would provide benefits to all.

There are more questions. Why, for instance, do households now continue to put in larger solar systems than they need and beyond their ability to self-consume, particularly with the new low tariffs of less than 6c/kWh?

The answer may be that they are preparing for battery storage, or for electrification and the dumping of gas hot water, or a combination of both.

There is no doubt that Energex finds itself at the cutting edge of the uptake of rooftop solar. In some areas, 40 per cent of its customers have solar.

Over the year, it estimates that rooftop solar supplies 7.4 per cent of total demand in the network. That would be at the expense of gas and coal generation.

But solar is not going away. Neither is battery storage, despite Effeney’s attempts to talk that down and suggest that the uptake will be as slow as electric vehicles.

All the independent studies, and some internal ones, suggest that to survive into the future, network operators and other utilities, such as the retailers, need to engage with the consumer on the issue of solar and storage, not talk it down.

Battery storage is coming, whether Effeney likes it or not — and for the sake of his network and upgrade costs he really should be liking it. So he, like other heads of networks, should be seeing this as an opportunity rather than a threat.

And on that point, public messaging is critical. Most consumers are not going to fuss over a few percentage points on tariff this or that. They will just make a decision on whether they think that the energy utility is doing the right thing or not.

This story was originally published in RenewEconomy on 1 March 2016 and has been republished with permission. You can follow Giles on Twitter @GilesParkinson.