Australia's minister for coal mining is reaching hitherto undreamt of heights in the fields of exaggeration, evasion and outright mendacity — and he doesn't like IA much either, writes Lachlan Barker.

In October of 2014, environment minister Greg Hunt was interviewed on ABC 7.30 and said the following:

Immediately, I saw it was another lie from the minister – further of the Federal Government’s policy to demonise – and then yet further demonise – the carbon tax.

So I did the research and verified that, indeed, the minister was wilfully misrepresenting the cost of the carbon tax.

The carbon tax brought in $15.4 billion over two years. At the time Hunt made this assertion, figures were available showing the cost was nowhere near his $36 billion figure.

In February 2014, the Australian Financial Review reported that the carbon tax had brought in $6.6 billion in its first year of operation and was projected to bring in $7.2 billion in the second year.

Now, Hunt knew that when he made his $36 billion assertion, or if he didn’t then he is in the Arthur Sinodinos position of having to admit to being either a knave or a fool.

So I followed up by contacting the minister’s press secretary, asking him:

“Can you provide any evidence to support this $36 billion claim made by the minister?”

He then began the Federal Government’s usual mumblings of how the scrapping of the carbon tax would free the economy and the usual rubbish.

So not getting an answer, I asked again — still no answer.

I continued to back him into a corner, until he realised there was no escape and suddenly blurted out:

Caught off guard, I replied:

He then saw his escape and said:

"Look, email me your questions.”

He then rang off. So I emailed through the same question and, of course, never heard from him again.

Pictured below is the email I sent through, which received no reply: 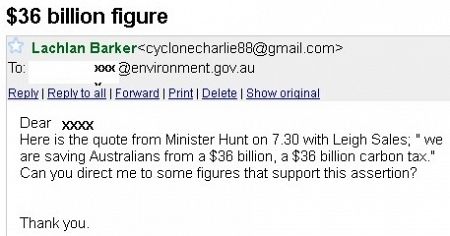 Now, when I said above, “As far as I know...”, I would like to point out that I have no doubts, then or now, about Independent Australia’s veracity.

News organisations that present unbiased stories with verifiable data are considered – perversely – biased. Independent Australia, The Guardian, Fairfax – the Sydney Morning Herald and The Age – and, of course, the ABC are all considered biased against the Abbott government and are thus not “accredited” by the Abbott Government.

Now IA has had some issue with accreditation before, as this story by Callum Davidson from 2013 shows. So I contacted editor Dave Donovan and asked about our status

What does he [Hunt’s press secretary] mean by "accredited".

That is the Canberra press gallery you are referring to [in Davidson’s story], which is only one body.

We are classed as news by Google, so I'd suggest saying that.

But in the end, this whole sorry exercise in weaselling out of a difficult question is seemingly the Abbott Government’s main tactic for dealing with organisations that are “biased” against them.

So then I thought that would be the end of the $36 billion matter, until December, when Greg Hunt suddenly began using the correct figure for the carbon tax, $15.4 billion.

So I jumped on that and emailed through the following question:

On 29 October 2014 you said in interview with Leigh Sales that the Carbon Tax cost Australians '$36 billion'.

Now you are on record as saying that the carbon tax cost '$15.4 billion'.

Can you explain why you are now saying the Carbon Tax cost has halved?

Needless to say, I have had no reply.

Really, it was a Ministry of Truth from 1984 style episode, with the minister’s logic as follows:

But then we moved on from the cost to whether the carbon tax was effective, and once again Hunt was involved in another ministry-of-truth-cherry-picking-only-the-figures-that-suit-me exercise to further demonise the carbon tax.

On ABC Radio's AM program, on 5 January 2015, Greg Hunt said the following:

Thankfully, The Conversation put that claim under the spotlight with their 'Fact Check' program.

The Conversation got an expert in the field to analyse the minister’s claim and the data involved. Then once that initial analysis was done, this analysis was then sent to another expert, with no name on the document, for a secondary analysis to confirm or deny the first expert’s findings.

The initial study was done by the University of Melbourne’s Peter Christoff and the review by Mike Sandiford, also at Melbourne University.

The verdict from Christoff ends with:

‘In conclusion, Minister Hunt’s suggestion that the carbon price had little effect on the rate of emissions reduction seems to be incorrect.’

‘The analysis appears to be supported by the data.’

‘In the two years of the carbon tax, emissions declined at 5%, some nine times faster than during the preceding five years.’

So it seems that minister Hunt was once again spreading incomplete, cherry-picked data to demonise the carbon tax.

Or to put it another way — lying.

But then things got really out of control with Hunt showing a divine lack of judgment, by taking on GetUp! through social media. I don’t know who advised the minister to do this (if anyone) but they really should have known better. 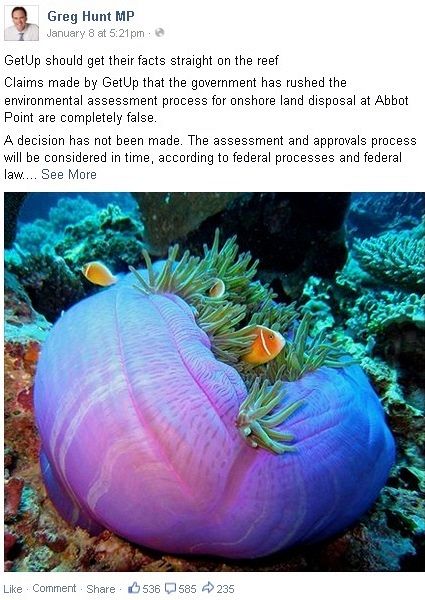 ‘GetUp(sic) should get their facts straight on the reef’

He then goes on to lambast GetUp! (note the exclamation mark; Greg Hunt should learn how spell the name of those he’s attacking in my opinion).

There then follows a diatribe against the activist organisation making all sorts of wild allegations of getting everything wrong.

In a vanishingly short space of time GetUp! responded with a detailed refutation of every single allegation made by Hunt.

You can read the full document here.

A summarising graphic is shown below: 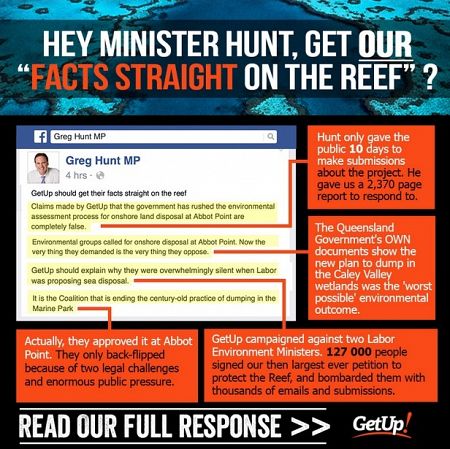 So, who got it right?

You can make up your own mind from reading both documents, however what I found fascinating was the number counts.

As you can see at the bottom of Hunt’s post, he got paltry 536 likes and 235 shares. There were 585 comments, I patrolled these with interest and discovered that the bulk of them – something like four to one – were supportive of GetUp! and vehemently anti-Greg Hunt.

Here are the first four comments that came up when I clicked the comments balloon on Wednesday 28 January, 2015: 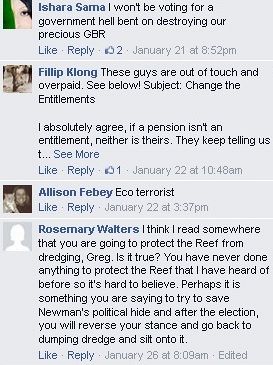 However, if you really want to see some numbers, take a look at GetUp!’s rebuttal page: 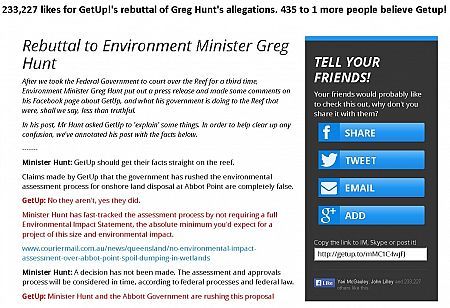 GetUp! got their facts right on the Great Barrier Reef, Greg Hunt didn’t.

Thus we are left with a paraphrasing of an old aphorism: If you can’t say something nice about a person, say nothing at all.

So we ask Greg Hunt: If you can’t say anything truthful, then shut the $%&* up.