A landmark Dutch ruling has roused the Australian community to use human rights as a legal basis to sue the Abbott Government for its notorious inaction on climate change, writes Dierdre Fulton (via Common Dreams).

SIGNALLING THE global implications of last week's historic Dutch court ruling – the first in the world to use human rights as a legal basis to protect citizens against greenhouse gas emissions and global warming – environmentalists in Australia are reportedly preparing to launch a similar legal challenge against Prime Minister Tony Abbott's government for its notorious inaction on climate change.

In response to a lawsuit filed by the Amsterdam-based environmental nonprofit Urgenda Foundation along with over 800 Dutch citizens, the Hague District Court ruled last Wednesday that the government has a legal duty to reduce carbon emissions by 25 per cent by 2020. It marked the first time a court has determined the appropriate emissions-reduction target for a state, based on the duty of care owed to its people.

News outlets predicted at the time that the decision could set a precedent, triggering similar cases all around the world. As Emma Howard wrote in the Guardian last week:

‘The verdict will likely not only inspire lawyers, but the environmental movement, which is tired after 23 years of international negotiations. Themultiple successes of the fossil fuel divestment campaign have provided a new, hopeful narrative of international relevance in recent years — and this court case could do the same.

Like the UK’s mass climate change lobby last week, this David and Goliath case shows that the climate change movement is not just made up of lentil-eating, sandal-wearing idealist liberals. All of the plantiffs who successfully sued their government today are Dutch citizens, crowdsourced by Urgenda, the environmental foundation behind the case.’

Now, according to Australia's SBS News, environmental lawyers in Melbourne are preparing to launch similar action in that country.

"really raises the energy and appetite of the community to stand up and use the courts when governments and policy fouls them.”

"this question about harm to Australians themselves and a failure of policy to deliver on the emissions reductions required to stop dangerous climate change has not been before an Australian court." 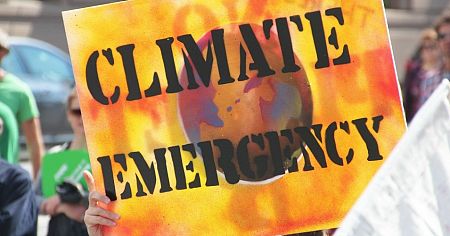 A sign at the People's Climate March in Melbourne, Australia, in September 2014. (Photo: Takver/flickr/cc)

In a post on The Conversation, Katherine Lake, research associate at the Centre for Resources, Energy and Environmental Law at University of Melbourne, added that

‘in Australia, environmental groups generally have to show a 'special interest' in the subject of the action, beyond that of the general public. This has been a stumbling block for public interest environmental litigation in Australia."

‘[i]t is possible that if the government’s intransigence on climate change action continues, the courts in Australia will be increasingly called on to decide questions such as those raised in the Netherlands case.’

‘While the decision of the Dutch court was made in a domestic setting, it has broad international implications, particularly for developed countries such as Australia. Besides the growing diplomatic pressure on Australia to step up its action on climate change, there is, for the first time, judicial evidence to compel developed countries to take serious action.

Measured against the Dutch court’s verdict on a fair and reasonable target for a rich nation, Australia’s current 5% target looks inadequate. The spotlight will increasingly be on Australia to justify this target in light of the decision.’

Abbott is facing calls for increased climate accountability from many fronts. On Monday, a coalition of environmental, public health, labor, business, and socially responsible investment groups known as the Australian Climate Roundtable came together to declare:

‘Australia should play its fair part in these efforts while maintaining and increasing its prosperity.’

In the statement (pdf), the coalition said that supporting the global community's goal of limiting climate change to less than 2°C above pre-industrial levels

‘will require deep global reductions in greenhouse gas emissions, with most countries including Australia eventually reducing net emissions to zero or below.’

The statement went on:

‘[d]elayed, unpredictable and piecemeal action will increase the costs and challenges of achieving the goals and maximizing the opportunities... The foundations of climate policy need broad and durable support, and we all have a role in building it.’

Dutch court rules in favor of science, orders government to do something about #climatechange http://t.co/KR9EzxA2aQ pic.twitter.com/ZLx3t54H80

Fight back on the Abbott Government's inaction on climate. Subscribe to IA for just $5.