What climate sceptics and the broader community need is not simply warnings of future negative impacts but hope in the form of positive alternatives. Dr Barrie Pittock reports on the coming technological revolution in renewables.

OVER RECENT decades climate scientists, international organisations and environmentalists have produced dozens of reports and articles foretelling the likelihood of human-induced climate change due to the burning of fossil fuels and the cutting down of forests.

Most of these have focussed on the probability of largely detrimental effects like rising sea levels, more extreme weather events, and adverse effects on agriculture, pests and diseases, etc., etc.

This has been viewed by many as “doom and gloom”, or, as some avowed sceptics call it “doomsdayism”. This is understandable if it is seen as scare tactics that threaten profitable enterprises and investments that provide jobs and support communities. What the sceptics and many in the business community see are “doom and gloom” reports advocating reduced greenhouse gas emissions through reductions in existing fossil-fuel based enterprises, thus threatening existing jobs and investments.

What these sceptics and the broader community need is not simply warnings of future negative impacts but suggestions of positive alternatives that evidently provide hope and future prosperity.

Environmentalists and those concerned about human-induced climate change do attempt the positive by advocating renewable energy through renewable energy targets or taxes on emissions. This includes international moves towards national or global emissions reduction targets.

However these are seen by investors and businesses in the main as at the expense of existing fossil-fuel based enterprises, and as costly and damaging to the economy, and they therefore oppose such measures.

However, a technological revolution is already underway, with renewable energy a rapidly growing fraction of the energy mix in many countries including Germany, the USA, and even China and India. (This has had wide international news coverage and details are available on the web with one of the best sites being RenewEconomy.) 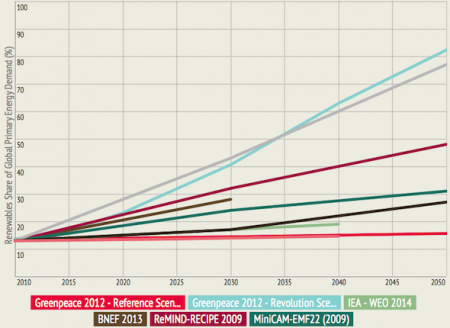 The market for fossil fuel exports is about to decline rapidly, so investment in fossil fuel industries will soon become "stranded assets". Renewable technology, including not only solar, wind and tidal power, but electric cars and storage batteries, like that about to flood the market from Tesla Motors will be the new growth industries.

The key question for many investors is the time-scale for this inevitable technological change and how it compares with investor expectations, the political election cycle, and voter expectations.

The new Tesla battery storage development highlights that the technological revolution is already taking place. Off-grid renewable energy supplies, recharge of electric cars reducing reliance on oil, and the chance for rural and remote communities to become self-sufficient will all have massive economic and social benefits and can be expected to take off rapidly.

It is time policy-makers, businesses and investors realised the implications of the technological revolution already happening. It is not only that it is happening overseas now, but demand for fossil fuels is falling, thus, impacting on our exports of coal and maybe natural gas in the near future.

More importantly, Australia is lagging far behind in its deployment of renewable energy and thus missing out on the new cheaper energy sources that will be needed to replace jobs and income lost from our falling minerals exports.

Australia needs investment now in renewable energy technology and installations, which will be not only cheaper than coal-fired power, but will create jobs and income, especially in rural and remote communities which desperately need them. We should be looking forward to remote communities which are not only energy self-sufficient but exporting energy in the form of recharging electric cars and trucks on nearby highways but also renewable fuels generated via renewable energy.

@StephenLeahy http://t.co/Ivu6RwBs0k Canada and Australia being left behind while the rest of the world evolves around us #renewables

Renewable energy storage and transport via the production of hydrogen or ammonia from electricity, is proven technology overseas. These non-polluting renewable fuels can be exported via tankers or pipelines, and huge potential markets exist in, e.g., China and Japan, where they can be used to regenerate electricity or used to fuel vehicles.

Renewable energy is thus a good long-term investment in Australia with the potential to increase jobs and income all over the country. Meanwhile investment in fossil fuels, such as new in coal mines and export facilities will rapidly become stranded investments. That is the reality. The sooner Australian policymakers recognise this the better off we will all be.

That is quite apart from avoiding the bad effects of enhanced climate change. We need to join the technological revolution or suffer the consequences of being left behind!

For the latest on what is happening in the world of renewables, subscribe to IA for just $5.

6 June 2015, 8:00am What climate sceptics and the broader community need is not simply warnings of ...
Join the conversation
comments powered by Disqus
News updates