Research by Prof Philip Adams, Janine Dixon and Prof Peter Dixon shows that the carbon tax will have virtually no negative impact on Australia's economic growth. 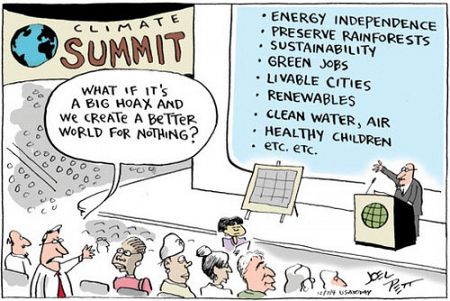 CUTTING greenhouse gas emissions is like buying an insurance policy: we incur a cost to reduce a risk. Every year Australians spend millions on insuring homes, cars and their health, not because they know that something will happen to them, but because of the risk that it might. Households make the decision that insurance premiums are worth paying. As a nation, what premium do we pay for insurance against catastrophic climate change?

Modelling by the Australian Treasury supported by the Centre of Policy Studies (CoPS), shows that to cut greenhouse gas (GHG) emissions to 80% below 2000 levels in 2050, the Australian economy would be 2.8% smaller than it otherwise would have been. How do we interpret this?

Without the carbon tax, Australia’s GDP per head was set to grow at an average of 1.4% until 2050. With the tax in place, growth would average just over 1.3%. The implication is that the level of GDP we would have reached on 1 January 2050 will not be reached until 1 January 2052. In other words, the 2.8% reduction in GDP is equivalent to two years worth of economic growth. Phased-in over 40 years, this is less than 0.1 percentage point shaved off annual growth.

Is 2.8% a reasonable estimate? The main GHG emitting activities are fossil fuel-based electricity generation and the use of motor fuels. In Australia these activities account for around 5% of GDP. Advice from scientists and engineers suggests that the adoption of current alternatives to fossil-fuel-based technologies would approximately double the cost of electricity and motor fuels.

On this basis, if we were to replace 80% of our usage of fossil fuels with alternative energy, it would cost around 4% of GDP. But 4% is a pessimistic estimate for two reasons.

Firstly it is based on the comparison of current costs. If the world embraced the need for deep cuts in GHG emissions, we would expect rapid technical progress in low-emission technologies, reducing their cost.

The second reason is that we would not replace the whole 80% of GHG emitting activities with the more costly alternative energies; we would also reduce overall energy usage.

The aggregate cost seems bearable. But what about the distribution of the cost?

Low-income households are squeezed from both sides. Electricity and fuel are necessities and typically account for a greater proportion of the household budget in low-income households. On top of this, low-income households may not be able to absorb extra costs easily. Regional impacts also have the potential to be uneven. Areas such as the Latrobe Valley in Victoria have an over-representation of emissions-intensive activities.

This is where the recycling of the carbon tax revenue is important. Tax revenues are earmarked for assistance to the so-called emission-intensive, trade-exposed industries and for household assistance. Household assistance takes the form of direct payments (the Clean Energy Supplement for low and middle-income households) and a significant increase in the tax-free threshold to over $18,000. This redistributes the burden of the carbon tax away from those who can afford it least.

Is the carbon tax really about getting people to switch off the beer fridge and get rid of the second car? The elasticities of demand for electricity and motor fuels are typically low, suggesting that to a large extent Australians will cover the price increase by reducing other consumption instead. So it is not the reduction in electricity usage so much as the substitution to alternative forms of electricity generation that will be the real achievement of the carbon tax. Lifting the price of cheap and dirty brown coal electricity generation opens the door for the more expensive, greener options: carbon capture, wind, geothermal and solar.

Many questions remain. Have we chosen a reasonable target? The interim 5% cut by 2020 target has been derided as unambitious. But as householders nervously await their next electricity bills, many will be satisfied that enough is being done. What is the cost of unabated climate change? Should Australia even bother, when our efforts are so small on a global scale?

The message from the economic modelling is that the current target is achievable at modest cost, and that distributional impacts need not be significant if a well-managed program of compensation is implemented.

(This research was funded by a number of Public and Private organisations, including the Federal Treasury and the Department of Climate Change and Energy Efficiency. Peter Dixon and Philip Adams do not work for, consult to, own shares in or receive funding from any company or organisation that would benefit from this article. They also have no relevant affiliations. This article was originally published at The Conversation. Read the original article.)
ENVIRONMENT ECONOMICS AGW Carbon tax climate change Economic Environment GDP Philip Adams
Recent articles by