Queensland Premier Campbell Newman broke his 2012 election promise and overturned a longstanding ban on uranium mining in Queensland, writes Dave Sweeney, and is now looking at exporting the radioactive material across the Great Barrier Reef.

THE LEGACY of uranium mining lasts longer than the promises of politicians.

This lesson has particular resonance today as it wasn’t so long ago Premier Campbell Newman wrote to the Australian Conservation Foundation with a promise that only lasted a matter of weeks.

“I take this opportunity to reaffirm my statements, made before the last election, that the State Government has no plans to approve the development of uranium in Queensland.”

So much for politicians’ promises. Unfortunately the legacy of uranium mining is much more consistent and long standing.

Fast forward to 2015 and the LNP’s uranium backflip remains, despite the fact no mandate has ever been sought or granted from Queensland voters on the issue. 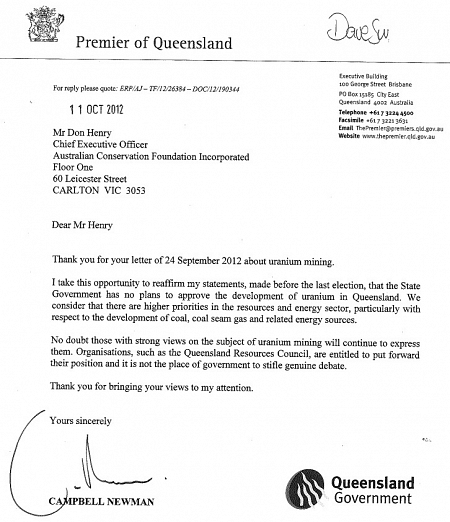 In Townsville, uranium mining is a key issue for people who remember the debacle that occurred around the Ben Lomond (Harvey Range) uranium deposit back in 1975.

The mismanagement of the site drew such community ire that it is often recognised as sparking the growth of the Queensland anti-nuclear movement.

The entire project was a case study in poor management and neglect. Despite earlier identification by the company managing the lease, Indigenous sacred sites were damaged. Radioactive tailings and residues were not properly managed and leaked into the nearby Keelbottom Creek and Burdekin River.

Eventually, despite efforts by the then Bjelke-Peterson Government to keep it open, the Queensland Mining Warden shut down the site in 1981.

The Mining Warden wrote in his report:

“I recommend to the Minister that this application be rejected in so far as it relates to the areas to be used for the Evaporation Ponds, the Tailings Dump and the treatment plant and facilities.”

In March 2014, after the Newman Government lifted the state’s uranium ban, the Townsville City Council unanimously passed a bipartisan anti-nuclear policy in response to the prospect of Ben Lomond being put back on the table.

Beyond Townville larger unaddressed issues relating to the potential resumption of uranium mining in Queensland remain about the transportation or uranium ore and potential impacts on the Great Barrier Reef.

Only two ports in Australia are currently licensed to export uranium from Australian mines: Darwin and Adelaide. These are located between 1,600 kilometres and 2,600 kilometres from potential Queensland mines — vast distances compared to routes from existing mines from shovel to ship.

The Newman Government has expressed a "preference" for exporting uranium overland to these two existing ports, but has not ruled out allowing uranium to be exported across the Great Barrier Reef.

In February last year, a photograph of a one-tonne ute driving back from NT’s Ranger mine carrying two 44 gallon drums of uranium strapped in with just a rope caused concern around the nation.

Worryingly, Queensland Minister for Natural Resources Andrew Cripps has refused to rule out the export of uranium across the Great Barrier Reef.

The risk of a maritime accident involving a radioactive uranium shipment on the Great Barrier Reef does not appear to have been seriously considered by the Newman Government or by the uranium industry.

The ALP and the Greens have clear policies supporting the reinstatement of the ban on uranium mining in Queensland, a position recently reaffirmed at the ALP State conference. The positions of the minor parties have been less clear, but we know the Katter Party and PUP have also voiced concerns about the resumption of uranium mining.

In the shadow of Fukushima, a continuing nuclear disaster directly fuelled by Australian uranium, it’s more important than ever to ensure uranium mining is kept out of the Sunshine State.

As we well know, politicians come and go, but the implications of re-opening the state to uranium mining would last forever.

Dave Sweeney is the Australian Conservation Foundation’s nuclear free campaigner. You can follow Dave on Twitter @NukeDaveSweeney and the ACF @AusConservation.

One of the largest returns of land to TO's in Queensland’s history kills off prospect of uranium mining @jrojourno http://t.co/msCIGgVJDD

18 May 2021, 12:00pm A dubious Coalition plan to temporarily dump nuclear waste for a future government ...