SMOKE FILLED our nostrils the weekend before last (24 January).

It’s one of the more frightening smells of the Australian summer.

But people living on farms and in towns on the edges of the vast Pilliga Forest are familiar with this smell, as they know fires are common and there is a certain preparedness. However, these days they quickly ask: Where in the Pilliga? Is it near the Santos gas wells?

Locals and firefighters from across the State know that a Pilliga fire is a risky, unpredictable and challenging beast, because they have been called to the North West on a regular basis to face it down. Now – and certainly in the future – if Santos gets approval for their coal seam gas (CSG) wells in the North Eastern part of the Pilliga, close to Narrabri, that danger to residents and firefighters will increase enormously. There are already approximately 30 “exploratory” wells with flares, a small gas power station, pipelines and other infrastructure in the forest that pose a significant increase in the risk. Santos proposes 850 such wells plus infrastructure if they get approval from NSW State Planning Department. It’s madness. 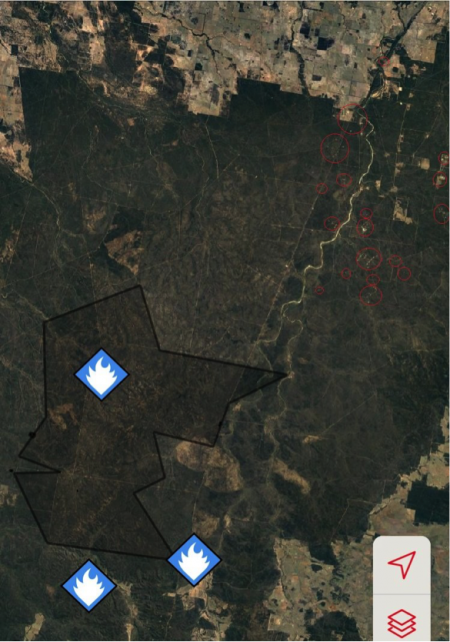 (Image via No 2 Gas from the Pilliga)

The satellite picture above shows the extent (58,000 hectares) of the fire on 24 January 2018, in the southwestern sector of the Pilliga Forest. The Newell Highway is the straight line cutting down the middle. The small red circles indicated on the map (in the North Eastern sector) show the locations of CSG exploratory wells and associated infrastructure already built by Santos and former owners, Eastern Star Gas.

It’s important to note that wells and other structures have multiple gas lines dissecting the area with open vents and flares, operating even on complete fire ban days. There are about 30 wells now. Imagine 850 well pads.

What has frustrated many in our communities is that this most recent fire, with its huge swathe of destruction to the forest, its wildlife and economic value, and the new risks from further CSG development, caused hardly a blip in the mainstream media.

Five years ago, the Warrumbungle National Park, west of Coonabarabran and adjoining the Pilliga Forest, had a catastrophic fire event. Some people remain traumatised and others are on high alert for signs of fire, as they fully understand the consequences of major fires. It would seem reckless of our governments to ignore the terrible added risk that a methane gas project in this highly flammable forest would pose.

Perhaps the mainstream media servicing our coastal and urban population have no understanding of the value of a region like the Pilliga Forest. Perhaps, the reasoning goes, it’s just a lot of dry bush where hardly anyone lives and fires happen there all the time, so why should we care about it or about gas wells being built there? Why does it deserve any protection or attention?

'A place of outstanding conservation significance, the Pilliga Forest covers an area of approximately 500,000 hectares. It is the largest remaining temperate woodland in Eastern Australia and the largest forest remnant left in the heavily cleared Wheat-Sheep Belt.'

Large parts meet the criteria for the National Wilderness Inventory and provide refuge to a huge diversity of birdlife and threatened animal and plant species. It is recognised by the Federal Government as one of only 15 national biodiversity hotspots in Australia. For the region’s Gomeroi people, it is of high cultural significance with many heritage sites, which include rock shelters, burials, grinding grooves and scarred trees.

The Pilliga’s greatest value, though, lies beneath it. The sandstone below it forms the southern recharge area of the Great Artesian Basin (GAB) and also contributes to the surface water flows to the Murray Darling Basin (MDB). Life of any type in western areas of three states – wildlife, human communities, farms and economies – depend on this water. Any sustained destruction of the Pilliga and its support to life-giving aquifers is an existential threat to everything that depends on this artesian water source.

Some people argue that fire is a natural part of the Pilliga’s renewal – set ablaze most often by lightning strikes on a regular basis – and that fire is an important aspect of clearing and the following regrowth of many plant species. They argue that this latest is just another Pilliga fire and part of the natural cycle. There is some truth in that. However, climate change is putting a new intensity into that equation, so that Pilliga fires are becoming bigger, more catastrophic and much harder to fight or contain. Why would any government seek to add an intersecting grid of highly flammable methane into that mix? Coal seam gas wells in the middle of the Pilliga gives new meaning to the adage “adding fuel to the fire”.

Firefighters are dealing with new challenges in super dry forests not experienced before. In this latest fire, humidity readings were found in the range of zero to three per cent, which shocked hardened fire controllers who have worked in the Pilliga for 25 years. Fires like this create their own weather. with winds that swirl in what some described as a “washing machine” effect. These factors make it highly unpredictable and dangerous to deal with. Professional and volunteer firefighters are most concerned about the added dangers that would occur with a large gas field development added to this scenario.

The NSW Rural Fire Service was unimpressed with the submitted Santos Environmental Impact Statement (EIS) regarding fire, stating in summary:

'In essence, the EIS is considered to be short on detail with respect to bushfire impacts on various components of the developmental proposal .... As such, the current document does not provide sufficient detail for a conclusive environmental impact assessment around vegetation clearing requirements.' 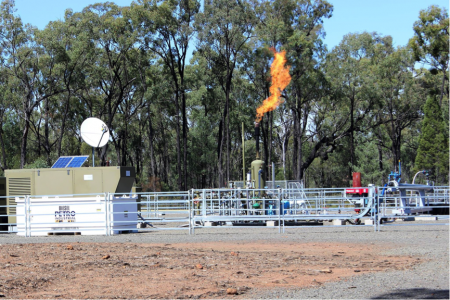 Santos can already operate on special rules that are not applied to the rest of the community. The photo above shows a flare at a wellhead. If the project goes ahead, there will be many more of these and of much greater height. These flares can remain burning on total fire ban days. Surely a dry leaf through this flame could provide an ignition point for the closely surrounding forest.

Flares are only one of many fire risks posed by a gas field. Professor Anthony Ingraffea has detailed the enormous problem of “fugitive emissions” across all aspects of methane gas production and distribution. Measurements in gas fields show that leaks happen during drilling, fracking and flow-back operations. as well as during processing, and along pipelines and at storage facilities. Imagine going into such an area to fight a fire where you could be standing in a pocket of gas, or next to a leaking pipeline, ready to explode if an ember ignites it.

CSG wells are only economically productive for about three years and are then “capped”. After production stops, there would be a legacy of leaky old dilapidated wells across the Pilliga. Santos would be long gone, but the increasing fire risk would remain for locals to face each summer.

Firefighters in Queensland have already experienced highly dangerous behaviours by gas and pipeline construction companies. When clearing easements for pipelines, trees have been pushed up on either side forming an impenetrable barrier of timber and debris that fire trucks cannot cross. The risk of crews being trapped in such a situation is very real.

Another problem is pipelines not being sufficiently tamped down after burial, leaving the surface prone to subsidence. Fire crews can be “dry bogged” across such lines, making it impossible for them to reach fires or worse, leaving them trapped and exposed to the fire front.

CSG is methane, which, as NASA climate scientist Drew Shindell reported in the journal Science, is 105 times more powerful than carbon dioxide as a global warming contributor over a 20-year timespan. What an irony that our State and Federal governments promote the Santos CSG project in the Pilliga when it fuels the very process that threatens its existence as a viable forest.

Global warming will increase temperatures, reduce humidity and increase pressure on our limited water resources in the Pilliga and the surrounding food producing regions. The production of gas in that region is a guaranteed recipe for a human and environmental disaster in the near future. Not "just another Pilliga fire", but the one that everyone will know about, because its outcome will be catastrophic.

Rosemary Vass is a retired educator and a member of the Knitting Nannas movement. You can follow Rosemary on Twitter @coonavass.

A great news report on what's happening out in the Pilliga... We are trying our best to raise awareness and to help these farmers and landholders #nocsg #csg #fracking #savethepilliga #auspol https://t.co/V4j3SeiAdy