The wives of Rupert Murdoch 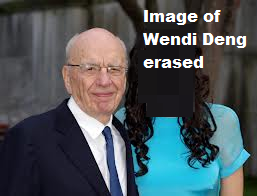 RUPERT MURDOCH’S DIVORCE from his third wife, Wendi, was inevitable. He had been complaining about her for years. But what effect will it have on his Australian operations? A significant one, I believe.

Rupert had anticipated the break-up even before they married. He set up a mutual pre-nuptial agreement, placing a limit on what she would get if they ever parted.  Wendi had no option. He had burned a stack of money when he divorced his second wife and was not about to fall into that trap again.

I knew both of Rupert earlier wives. Patricia Booker was a friend of mine in the early 1950s. Her boyfriend at that time was Geoff Corke, one of the team who appeared regularly on Graham Kennedy’s “In Melbourne Tonight.” Another friend of hers was the singer Kamahl.

Pat worked as an air hostess for Reg Ansett’s airline. She married Rupert in 1956. I spent a weekend with them around 1958, when Pat had just begun her pregnancy with Prudence, their first and only child.

The couple were living in a home in Adelaide and Pat hired a gardener to keep the yards and lawns tidy. The gardener was Kamahl. Struggling to make a career for himself as a singer, he had taken on a part-time business as a gardener and handyman.

Pat told me that she was unhappy in Adelaide and I was sympathetic to her feelings. Adelaide is the most insular city in Australia and she felt isolated. I understood. South Australians seem to have an inbuilt animosity to people from other states.

I was happy for Rupert when Prudence was born and partly sad for Patricia, because I felt the marriage was untenable for her. They were divorced after only 11 years.

Because our company in Melbourne was one of the Murdoch family holdings, along with the Adelaide News, I had met most of the executives there but found a certain unspoken hostility in my contacts with them.

There were exceptions. I liked the general manager of News Limited, Beavis Taylor ― a squat, plump, humorous little man who often took me to lunch in the pub next door and regaled me with hilarious stories of Rupert and his father Keith.

In general, the people in Adelaide treated the young Rupert with far more deference than we did in Melbourne, but we were making much more money than The News.

Beavis passed away a year or two later and his place was taken by Ken May, the journalist whose personal influence with the South Australian premier Sir Thomas Playford saved Rupert from jail and certain bankruptcy, right at the beginning of his career.

The issue was a child murder case in which The News campaigned to save a man from hanging at a time when Playford faced a critical election and saw the execution of a clearly innocent aboriginal as a way to secure his government’s future. Such was the mood of the South Australian electorate in those primitive days.

In Melbourne, I was assistant general manager of Southdown Press, a publishing company whose chairman was Dame Elisabeth Murdoch and I had no direct involvement with the Adelaide News. My trips to Adelaide were frequent because Rupert wanted my advice on News Limited securing the second television licence for Adelaide and my experience in television was useful to him.

Rupert’s second wife, Anna Maria Torv, came to Australia with an immigrant family from Hungary via Scotland. Educated in Sydney, she had become a cadet journalist on the Daily Mirror and caught Rupert’s eye even before he had divorced Pat.

I had been posted to Darwin to establish the Northern Territory News soon after Rupert married Anna. He brought her along with him on a kind of honeymoon trip and to tease me with his latest acquisition: his first company aeroplane, a twin-engined Cessna with seating capacity for eight passengers.

Rupert had wanted the luxury honeymoon suite at the Hotel Darwin. There was only one such suite in the hotel. It was already booked. Rupert had typically given me only 48 hours notice of his arrival.

As a friend and occasional sparring partner of the hotel’s owner, the wealthy Greek investor Michael Paspalis, I had to beg him to kick out the present guest to accommodate Rupert and his bride.

Michael, of course, said he was sorry but it was impossible. I had to find the next best place. I booked them into a waterfront motel, with a beautiful view over the sparkling Arafura Sea and the Darwin Sailing Club.

The next morning, the newly wedded cadet reporter gave me a dressing down because (she said) the bed sheets were dirty and she didn’t like the breakfast or the service. Darwin then was not the city it is today. There were only three hotels and one decent motel in the entire city.

The bride alternately complained about the heat and the dust while snuggling and cuddling Rupert in what I could only describe as a revolting display of possessiveness. Next day, we flew to Alice Springs and (what was then called) Ayers Rock in Rupert’s new toy.  I drove to some of the most beautiful gorges outside the town.

Not long after that trip Anna Murdoch was pregnant with their first child, a daughter, Elisabeth. Later came the sons Lachlan and James.

When famous people break up, there is always speculation. Rupert expects that and has his way of dealing with it. He has made most of his money from reporters inventing scenarios and sneaking embarrassing photographs.

Most probably he has simply got tired of Wendi’s tantrums and has no further use for her. He deals with staff the same way. They all have a use-by date.

His family problems play a part in this latest manoeuvre.

There was a time when the Murdoch family was close, held together by the strength of character of their remarkable mother. Rupert changed that when he paid out all the family in cash and claimed News Corporation entirely for himself. It is his and his alone.

The family never accepted Wendi. It was made very clear at the funeral of Dame Elisabeth. Rupert and Wendi left the church in one direction and the family went off the other way.

The rift became greater when Lachlan decided to leave the company and run his own business.  He refused several requests to take control of the Australian arm.

James has disappeared into the bowels of the American entertainment branch after his pathetic performance in managing the British papers.

Elisabeth and Prudence have their own lives to lead. Elisabeth wallows among the British establishment and Prudence lives quietly near Sydney Harbor.

Wendi and her two daughters will never be a real part of the Murdoch family, but they will have enough money to live comfortably for the rest of their lives.

Things have changed for Rupert too. The British papers have suffered significant circulation losses and so have the Australian papers. He is unlikely to be able to buy any more papers in the United States.

The split in the company between entertainment and print have given him two roles to play, but his attention is going to be partly on Britain but even more on Australia, now one of the richest and most progressive nations on the planet (despite what Joe “small business” Hockey tries to tell us).

Rupert is only interested in BIG business. He wants to stop the NBN rollout and become the sole owner of everything worthwhile in Australia ― including every source of information, entertainment and politics.

His chance to do so lies with the outcome of the election on September 14.