Australia's housing bubble and the road to private serfdom

Over the last 20 years, housing has developed a reputation as a risk-free and high-gain asset. Property remains a coveted asset and can now be purchased with a small deposit; the rest borrowed from banks. It certainly is an attractive investment: since 1996, housing prices, adjusted for inflation and quality, have soared by 141% through to 2015. 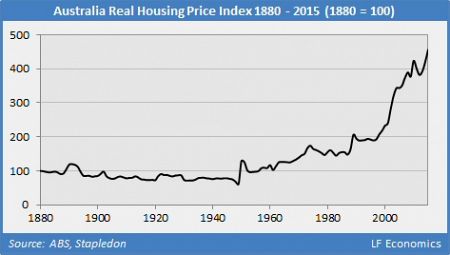 Many global housing markets corrected after the GFC, but Australia’s continued to boom, especially in Sydney and Melbourne. This resilience is attributable to the vested interests: the FIRE (finance, insurance and real estate) sector, numerous Federal and state government interventions, and leveraged home owners and investors, who believe housing price inflation benefits them.

Almost every residential owner wants the gravy train to continue running to escape the drudgery of wage labour and achieve the coveted status of property baron. Australia has one of the world’s most expensive housing markets, but unlike an Olympic gold medal, the nation should feel shame rather than pride in achieving this dubious feat.

Residential property is so highly leveraged that even a small fall in its value would have adverse consequences, placing heavily-geared owners in the position of negative equity. Falling prices and credit defaults can reverberate throughout the economy, leading to a recession or worse. After all, a real estate slump drove other wealthy economies into a major downturn during the GFC, not the other way around. 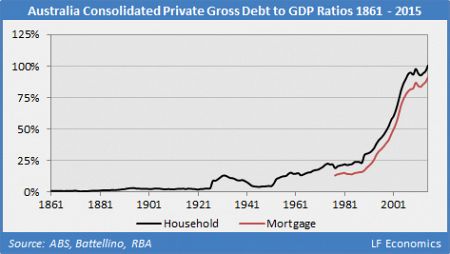 The largest and most important purchase the average person will make is not even financed with their own money. Relative to GDP, the Australian household sector vies with Switzerland for accumulating the largest debt burden globally. As of 2015, Q4, this amounts to 124%, which is much higher than what many other nations peaked at before the bursting of their housing bubbles. 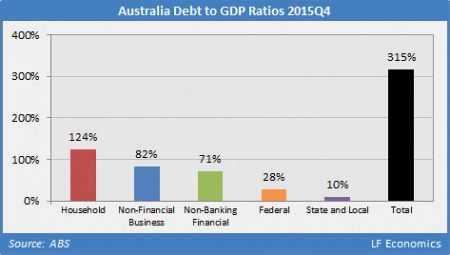 This massive indebtedness is ignored by both political parties, who endlessly claim we need to transition the Federal Government budget back to surplus as this represents "fiscal responsibility". The reason is because nobody wants the value of their properties to sink and, instead, is supposed to repeat the hysteria about the "budget emergency", "runaway public debt", "record deficit" and so on. Public debt peaked in 1932 at 173% of GDP, when the economy was far less productive. Today, it is low compared to historical and global trends.

With total household sector liabilities at $2.2 trillion dollars as of 2015, quarter four (Q4), Australians are so indebted that the majority of principal will never be repaid. With nominal rent growth now turning negative and wage growth at record lows, it will become increasingly difficult to finance repayments, especially for first home buyers.

Australians, like everyone else, have been convinced by neoliberal ideology that these onerous debts must be repaid to rapacious bankers, as economist Michael Hudson has noted:

What happened about 20 years ago is the bankers said, they made an anthropological discovery, a breakthrough. They found out that the poor are honest. Almost the only people who believe they should repay their debts are the poor people. And in fact, the less money you have, the more you believe the debts should be paid. What this means is that even though the poorer you are, the higher interest rate you pay, the poorer you are, the greater the likelihood the bank has that you are going to repay the debt.

As David Graeber’s masterful book, Debt: The First 5000 Years, shows, the leading method for elites to enslave the public is through private debt accumulation. The process looks consensual, with no overt coercion. As well as reaping increasingly larger profits from usury, elites gain from traumatised worker syndrome. Households become so indebted that workers one step away from missing a loan payment won’t ask for higher wages and entitlements for fear of unemployment. 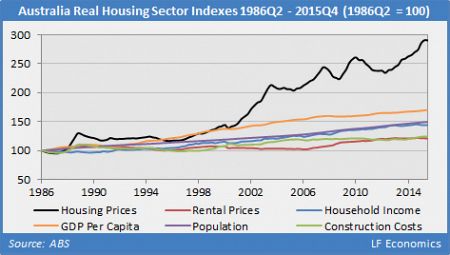 The FIRE sector is the real beneficiary of private debt growth, aided and abetted by neoliberal policies over the last several decades. The economy is beset with numerous problems, though these are presently disguised by steady underutilisation, a residential construction boom and a low rate of non-performing loans that all occur during a private debt boom.

Many younger Australians today did not experience the early 1990s recession as adults and, given the record run without an economic downturn, many believe housing prices growing faster than wages or rents is normal. The young are the primary victims of the housing bubble and demented tax policies, enslaved to rising debts while sidelined by both political parties to the benefit of the FIRE sector and older Australians.

To boost the bubble, government has engineered a variety of irrational policies, namely deregulation of the FIRE sector, the Big Four banks’ too big to fail status, first home owner programs and massive tax leakages. The role of government at all levels has been to act contrary to the interests of housing affordability, corrupted by the reemergence of the rapacious FIRE sector since the late 1960s.

Rising housing prices provides further pretexts to throw more fuel on the fire, with government unable to fix affordability when its own policies promote outcomes opposed to that aim. Current policies are designed to benefit existing home owners, not universal home ownership. The elevation of home ownership to the status of religion and the consensus that renting is dead has reinforced this outcome.

All levels of government are responsible, but the Federal Government is the most culpable, both Coalition and ALP. Perverse policies are attributable to the FIRE sector’s poisonous effect on democratic processes, a stacked parliamentary deck, extensive lobbying (legalised bribery) and soft corruption. The political and economic classes believe not in the "trickle down", but the "flood up" effect.

While mainstream economists claim there is no free lunch, it is obvious the wealthy are feasting daily on a banquet of economic rents and unjustified privilege. Despite commentators blaming Australia’s minimal levels of government debt and small social welfare state, it is the colossal corporate welfare state that has spiralled out of control, concentrated in the FIRE sector. The economy has been regressively transformed by neoliberal interests into a haven for unproductive parasitic rentiers.

The correction may be postponed for years as the government, captured by the FIRE sector, is resolutely determined to maintain these perverse policies to keep housing prices inflated. From the first Rudd government onward, there is greater awareness among both elites and the public of the housing bubble and its potential for bursting, thereby decimating, unearned wealth and income.

The common refrain of government and FIRE sector economists is that either a housing bubble does not exist or overvaluation is minor. As historical and recent events testify, these responses should be disregarded as they are entirely predictable and self-serving. The research by the small number of economists, who identified the U.S. housing bubble and predicted the GFC are supressed by the vested interests, dismissed as irrelevant and deemed incompatible with Australian exceptionalism.

Economists on the payroll of vested interests have attempted to explain away sky-high prices and private debt on the basis of lower nominal interest rates and inflation, demographic change, developer charges and levies, population growth, a dwelling shortage and so on. During the 2000s, U.S. economists asserted all these factors to falsely justify historically high and rising housing prices. The claims are simply repeated in Australia.

Financial capitalism has imposed a short-term outlook on the public who are oblivious to the dark history of real estate and banking. Vested interests do not want this history taught because its lessons are stark. With the household sector creaking under an unsustainable amount of debt, housing prices will eventually decline under the weight of the FIRE sector’s corruption and inefficiency.

Philip Soos is the co-author of Bubble Economics: Australian Land Speculation 1830-2013 and co-founder of LF Economics. You can follow him on Twitter @PhilipSoos.