The NRA has been keeping people living in fear through the media in order to keep selling guns and promoting violence, writes Kerry Cue.

THE NRA BLAMES “vicious, violent video games” and “blood-soaked slasher films like ‘American Psycho’” for mass shootings. Researchers, however, are adamant. ‘I can state that there is no evidence to support the claims that violent media and real-world violence are connected,’ insisted Professor Christopher Ferguson, Stetson University, last year following the tragic shooting at Stoneman Douglas High School in Parkland.

Prof. Ferguson has been researching violence in video games for almost 15 years. So we can all take a deep breath and offload any collective guilt about watching violent films or playing blood-soaked video games. There is no threat from imaginary guns.

As I’ve recently written a suspense novel about American gun culture, I’m especially pleased to be let off the hook. I’m not encouraging violence even though the plot employs a dangerous idea, namely that ruthless anti-gun activists pick up guns and threaten a fictitious gun lobby.

My research, however, tells a different story about the role the media plays in promoting violence. Anyone who is interested in guns in any country including Australia – we’re all online now – is fed an endless stream of propaganda through YouTube, social media, gun chatrooms and gun manufacturers’ websites on the imminent threat of home invasion, street muggings and gang attack. Plus, there's the need to “stand your ground” to defend yourself against the enemy, including your own Government, who might decide to turn up and take your guns. 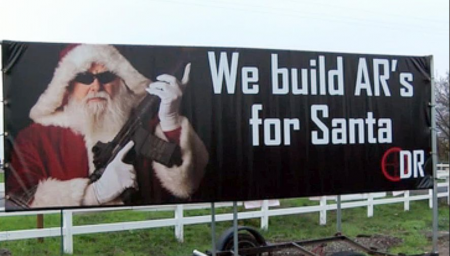 Christmas shopping in the U.S. somewhat goes against the season's message of peace and goodwill (Image supplied)

Here is a typical gun magazine ad slogan for a military-grade assault rifle under an image of an armed, overweight, middle-aged male in camouflage gear and greasepaint: ‘Defend yourself in Afghanistan, in Iraq… in your living room’. Fear is used to sell guns. So what? That’s marketing 101. And there is so much to fear. There is either a black balaclava-clad intruder with a gun about to break into your home right now or – as preppers in the USA, who stockpile arms and food, will tell you – the Government is about to collapse under the weight of its own debt and then you’ll be on your own.

The preppers call people who ignore their dire warnings “sheeple”. The marketeers create imaginary threats of violence to sell guns when the gun most likely to kill a gun owner is their own via suicide.

The real danger, however, is that so many of these websites and chat forums – not the dark web but legitimate pro-gun websites – use and promote hatred to sell guns.

Here are some examples:

What’s a feminist anyways? A fat pig who doesn’t get it often enough?

Obama, he’s a piece of shit. I told him to suck on my machine gun.

These statements were made by Ted Nugent, shock jock DJ, rock and roller and board member of the NRA at the time. 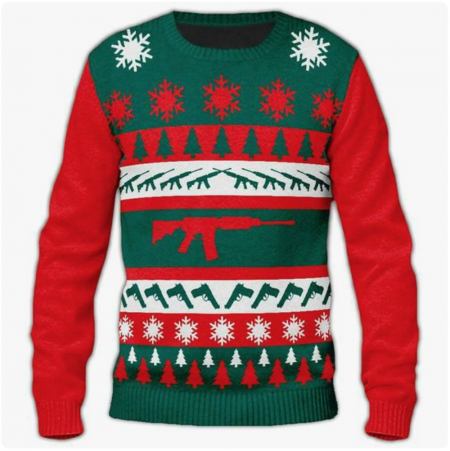 A Christmas sweater from America. Reindeer and holly are no match for an AR-15 (Image supplied)

Dana Loesch, in a recent NRA video, talks about “the utter moral depravity of the godless Left” who “insult and mock and disparage… the majority of Americans who cherish their faith and their firearms” and “openly demonise Christmas and Christianity”. Throwing Christmas into the mix is particularly ironic. If you subscribe to a gun manufacturer’s website you will most likely receive a “Christmas Greetings” email wishing you Joy to the World from an AR-15.

The marketeers insist you must be armed to defend yourself in your living room. But who from? The Leftards, the Hollywood elites, the foreigners, the feminazis, the godless Left, the perverts, the tree-huggers, the socialists, the home invaders, the street gangs, the (insert any derogatory racist/misogynist/homophobic term here) and Madonna, who, at a women’s march said she’d thought about “blowing up the White House”.

There are a lot of people to hate. And I’ve only included the mildest of inflammatory hate-terms that I’ve come across on gun-promoting websites, videos, video comments and pro-gun chatrooms.

Hatred is generated in anonymous forums throughout cyberspace. But when hatred and anger are spread to promote and sell guns, that is a deadly mix.

Parkland survivors warn Australia to keep away from the NRA after One Nation revelations https://t.co/0DXe5Jjv0K

Kerry Cue is an Australian journalist, mathematician and author. ‘TARGET 91’, her suspense novel on U.S. gun culture, was published by Penmore Press, AZ (2019). 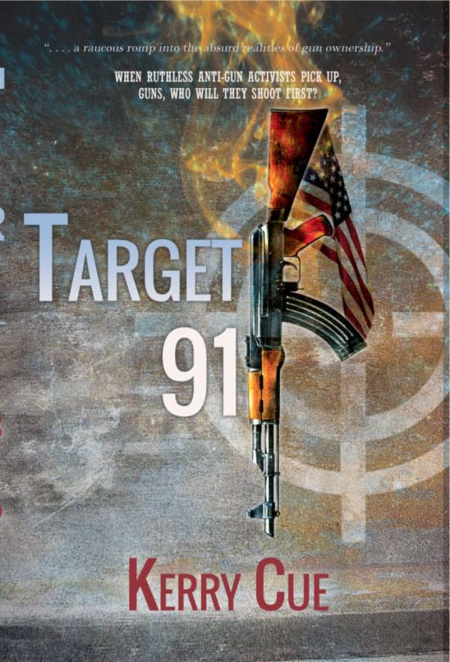 7 April 2022, 11:00am Australian Republicans are stirring back to life again.