Murdoch’s Brisbane masthead The Courier Mail has clearly displayed bias and inconsistency in its hysterical coverage of the Senate Inquiry into the Newman Government, writes Alex McKean and Stephen Keim SC.

THE ANNOUNCEMENT OF A SENATE INQUIRY into certain aspects of the Newman Government in Queensland has been greeted with howls of derision from Brisbane’s daily print newspaper, the Courier-Mail.

There was little evidence of balance in the coverage of the issue on 2 October 2014, when the paper contained a two-page spread condemning the Inquiry (nor again in today’s issue).

Liberal Senator Eric Abetz was reported as sounding the dire warning that the Inquiry, an instrument of Clive Palmer’s retribution, would cost Queensland 70,000 jobs.

Dennis Atkins said that the Inquiry would render Parliament a crime scene.

Another story, authored by Steven Scott, Sarah Vogler and Renee Viellaris, stated that the ‘taxpayer-funded’ Inquiry would double as a ‘PUP pre-election spruik’.

Yet another article, by Greg Stoltz, drew a connection between the Inquiry and outlaw bikies, who were said to be thanking Clive Palmer for taking up their fight against the Newman Government. Mr Stoltz said that both Clive Palmer and Senator Glenn Lazarus had emerged as ‘heroes of the violent motorcycle gangs that police have spent years battling to bring under control’.

The big guns have been brought to bear, with Andrew Bolt contributing a lengthy piece in which he described the Inquiry as a ‘witch-hunt’. Bolt said the Inquiry was a ‘posse’ which had been created to ‘dig for dirt’ on the Newman Government.

Readers were exhorted to ‘be in no doubt that this is personal’ and were directed to ‘look at the grubbiness’. Bolt derided the Labor Party for ‘sinking to Palmer’s level’ by backing the Inquiry before signing off with the phrase: ‘grubby, grubby, grubby’.

The editorial ran many of the same lines, accusing the Palmer United Party of cynically playing Labor and the Greens to set up the Inquiry.

The Inquiry, itself, was described as

‘… one of the most outrageous abuses of power and process seen in the history of the Senate.’

‘… voodoo mix of conspiracies and prejudices about the Newman government.’

Readers of the Courier Mail might be forgiven for missing, amongst the hyperbole, the facts that the Inquiry is targeted at investigating the disposition of moneys flowing from the Commonwealth toward Queensland in the days after the Newman Government came to power; the propriety of the Commonwealth’s devolving powers to issue environmental approvals to the Queensland State government; the separation of powers and judicial independence in Queensland; and the extent to which Queensland government policies and practices are consistent with international human rights obligations.

These terms of reference raise, among other things, issues of possible misappropriation of Commonwealth funds, originating from the taxpayer, by a State government. The focus of the inquiry appears to be whether those funds were applied to party political purposes here in Queensland.

The prospect of the Newman Government being released From federal restraints on approval of development on environmental grounds is disturbing and, seemingly, an appropriate area for inquiry by a body truly independent of that government.

There has been a series of revelations of political donations to the Newman Government or individuals, therein, principally, by proponents of development and mining proposals being closely followed or preceded by favourable legislation or administrative actions which have benefitted those donors.

The premier, Campbell Newman, is strongly supportive of developers and miners, seemingly, over many other public policy considerations.

Premier Newman has declared, on a number of occasions, that Queensland is ‘open for business’.

In very recent times, legislation was rushed through the Parliament under cover of darkness to remove, effectively, the public’s right to object to huge mining developments.

It is informative to compare the response of the Courier Mail to this decision by the Senate to establish an Inquiry to its editorial reaction to the announcement of other recent inquiries which may have been thought by some to have political, as well as public policy, motivations .

For example, on 9 February, this year, the newspaper’s headline blared

This opinion piece was attributed to unidentified ‘staff writers’. It is tempting to speculate that none of the ‘staff writers’ wished their by-line to be used to identify them as endorsing the establishment of an inquiry that clearly had a strongly partisan purpose.

The ‘staff writers’ began with a series of unsupported assertions, an example of which was:

‘It is no secret that unions… are a haven for crooks and swindlers.’

The writers then heaped praise upon Prime Minister Tony Abbott for having the courage to look into the shadowy world of trade unions. The writers compared PM Abbott, favourably, with Premier Newman, who was also cast in a favourable light.

The staff writers drew favourable connections between PM Abbott’s campaign against the criminal trade unionists and Premier Newman’s legislative campaign against motorcycle gangs in Queensland. It is worthy of note that the manner in which Mr. Newman’s government has legislated, purportedly, against “bikies” has also been controversial, including among experts on law enforcement.

The staff writers ended their by laying down the gauntlet to the Opposition Leader, Bill Shorten, to

‘… play a prominent role in stamping out the cancer of corruption.’

Similarly, on 7 October 2013, the same or different ‘staff writers’ welcomed the announcement of the Home Insulation Program, or ‘pink batts’ Inquiry by the then newly elected Abbott Government. Many observers felt that the decision to establish this Inquiry into a subject that had been investigated by a Parliamentary Committee, an administrative inquiry, the CSIRO, coroners from New South Wales and Queensland, and the auditor-general was politically motivated.

Political motivation was not a word in the vocabulary of Courier-Mail staff writers on that occasion.

The opinion piece ran under the headline:

The piece concluded by expressing the satisfaction of the authors that the terms of reference drawn up by the Abbott cabinet,

‘… included the ability to call former Labor ministers, including Mr Rudd and Mr Garrett, to testify as to what they really knew.’

It is the case that political institutions can establish inquiries with mixed motives. Very few decisions of politicians do not involve some calculation of political advantage as well as public benefit.

It is a legitimate concern, however, when the political calculus appears to dominate the considerations of the public good.

It is important that journalists and news organisations monitor and report both the public benefit and political advantage aspects of politicians’ actions so that the public is informed about these matters.

The public and, especially, the journalists’ readers are entitled to accept a degree of balance, consistency and impartiality in the way this task is carried out.

The recent history of the Courier-Mail in reporting the establishment of public inquiries shows that that news organisation, and its journalists (who, presumably, have little choice in the matter), have fallen well below these basic journalistic standards.

"has received a complaint over today’s front page" A complaint? I personally know of dozens who complained to APC? http://t.co/8NXn7VUEQ3 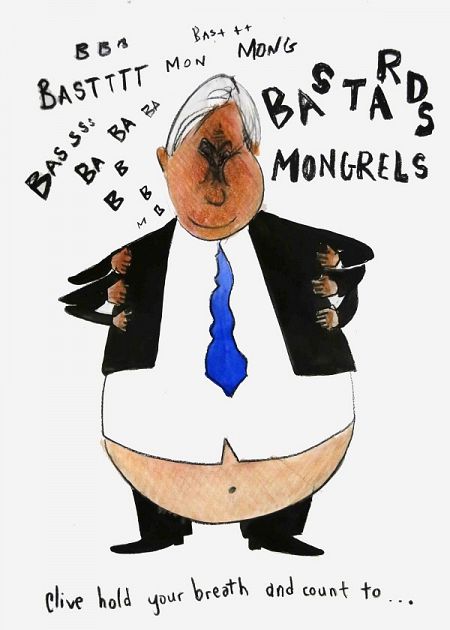