Worse than ice: Push to kill off killer alcohol during TV sports broadcasts

A new push out of Western Australia to reduce advertising for Australia's most dangerous drug on television during live sport broadcasts. Lachlan Barker reports.

Recently, another call has come for a reduction in alcohol advertising on television, particularly during live sport broadcasts — this one from Western Australia’s police commissioner Karl O’Callaghan.

In a piece for the West Australian headlined ‘Time to bite the bullet on alcohol advertising’, O’Callaghan makes a point that alcohol is Australia’s most damaging drug. Not methamphetamine – "meth" or "ice" as it is commonly known – but alcohol.

‘The meth debate has probably provided welcome relief for the alcohol industry which has long wanted a distraction from the fact that the cost of alcohol abuse to our community eclipses the cost of methamphetamine abuse.’

Now, don’t get me wrong, from what we now know, "ice" use is a terrible thing. However, as many would be aware, it is a favoured tactic of the Abbott Government is to scaremonger about some issue to distract attention from the real problem they do not wish to confront.

The best example of this is terrorism, which this fatuous Government continues to scream about.

Of course, in reality the number of deaths from terrorism is well down the list of threat in real terms. Suicide heads a list from the Australian Bureau of Statistics (latest figures from 2013, SEE ABOVE). Ice/drug overdose is not on the list, but – to give two examples – Indigenous Australians dying from diabetes is a greater number than deaths from terrorism, as is Australian women dying in domestic abuse situations.

Women’s Agenda puts the figure of Australian women dying in domestic violence situations in 2015 at the simply appalling two a week.

And it seems that another of these "distract-the-voters’-attention" issues is ice. In announcing a typically military sounding "National Ice Taskforce", it is clear that Tony Abbott is trying to make out Ice is the scourge of our society and only his government can solve the problem.

However to give scale to that: only 2.9% of Australians aged 12-17 have tried methamphetamine, while nearly a third (28%) in the same age bracket have had a full serve of alcohol. 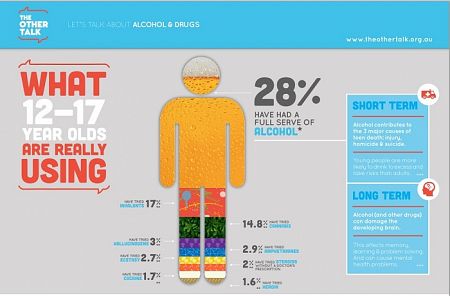 These statistics indicate why O’Callaghan says alcohol is the far bigger problem. He spoke out  following the release of two reports on the effects of alcohol in the fortnight before he did his column.

He gives great weight to comment from Australian of the Year Rosie Batty.

Here, O’Callaghan writes of how Batty:

‘... suffered unimaginable grief after her son was killed by his father, [and] has put her weight behind the National Framework for Action to Prevent Alcohol-Related Family Violence.’

O’Callaghan then quotes from Batty in press conference:

'In her press conference supporting the framework, she was at pains to point out that one million of our children are affected by someone else’s drinking, 140,000 are substantially affected and 10,000 are in some form of child protection because of alcohol abuse by a caregiver. She pleads for the public, the media and Government to acknowledge the problem and ‘for those in power’ to implement solutions.'

Then O’Callaghan asks for Australia to acknowledge the issue and make a stand, adding:

'In the end, however, it is down to the community and Government to take a courageous stand on solving the problem and both reports. The strategies for primary prevention suggested in both reports are the same. They call for a reduction in the physical and economic availability of alcohol and they call for further regulation of promotion.'

On alcohol advertising during sport, he says:

However, it seems most likely that O’Callaghan’s call will not be heard and alcohol advertising on TV will go in the other direction, more of it.

FreeTV Australia – and there’s a morally criminal organisation if ever there was one – have proposed a new code that moves the "M" rating from the current 8.30pm starting time up to 7.30pm. "M" stands for mature and recommends viewing by people only over the age of 15.

This is a blatant money grab for the alcohol advertising dollar, as alcohol can be advertised during the "M" period.

‘The ACMA has indicated that it has not formed or expressed a view on the substantive content of the draft Code. It will carefully consider the form of the draft Code as part of its decision making process.’

FreeTV’s proposed changes to the code, of course, keeps the alcohol advertising during sport in children’s viewing times in place.

So the, thankfully, independent ACMA will make the decision on whether there will be more alcohol advertising on our television.

And given all reported above from Rosie Batty and Karl O’Callaghan, it is fervently hoped to be that ACMA say a flat out "No" to any changes to the code that allow more alcohol advertising on our screens.

It would clearly be the most appallingly retrogressive step for our society to have increased amounts of alcohol advertising, encouraging Australians to drink more.

To highlight that I’ll close with this philosophical construct:

Just to be safe. Subscribe to IA for just $5.