There has been an emergence in recent year of “dark patterns” behaviour by sellers, which tricks users into doing things they may not want to do. Tom Rundle reports.

There has been an emergence in recent years of what are called Dark Patterns when we are purchasing goods and services online, defined by advocacy group darkpatterns.org as follows:

A Dark Pattern is a type of user interface that appears to have been carefully crafted to trick users into doing things, such as buying insurance with their purchase or signing up for recurring bills.

I think it’s about time consumers were protected from this behaviour, so I wrote to the Australian Competition and Consumer Commission (ACCC) about it. The problem and their response is outlined in this article.

Most people who've used the internet to purchase goods and services have been victims of such trickery and it takes a while to gain experience in getting through the process of making sure you don't sign up to newsletters, making sure you don't have extra items added to your bill, and making sure that your on-line payment is not a recurring one when making purchasing decisions.

In addition, many of these processes are "easy-in, hard-out" which makes it difficult to cancel a service you have accidentally paid extra money for by being required to send cancellation requests trough standard mail or to call a number that is not answered and/or difficult to find, rather than use the same easy mechanism to "opt-in" (e.g. a hidden box in a form that is pre-ticked).

If every time you put a can of tomatoes in a supermarket trolley, the retailer added a can of coke, with you having to go to the other side of the store to remove the can and place back in the soft drink section ‒ or else be required to pay for the can ‒ then consumers would force supermarkets to stop putting the coke in the trolley and potentially fine them for being misleading and deceptive conduct under the Competition and Consumer Act 2010 (formerly the Trade Practices Act). In the online world, this should be no different.

In terms of dark patterns, Tiger Airways are one of the biggest offenders.

I went to their site on my mobile site to book a return flight from Melbourne to Sydney. As with most airlines, I selected the outbound and inbound journeys by selecting the flights which had clearly displayed prices of $54.95 and $64.95 respectively, then clicked Next. On the next page I am then required to enter my details (first name, last name and DOB).

I assume this screen is inserted here likely to make me forget how much I've decided to pay on the previous screen. The next part is where it gets tricky. The screen below clearly shows no options checked but, in fact, I have agreed to pay an extra $40 for luggage without knowing it. 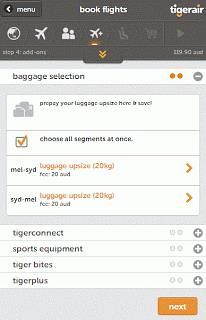 The way Tiger have done this is to separate some extras ‒ baggage upsize ‒ from other extras (tigerconnect, sports equipment, and so) to give the impression that nothing extra has been selected. Its blatant trickery and is misleading. This should be assumed to be deliberate.

The next screen is more of this.

The question of which seat I want, with different seats having different prices, intimates that if I want a seat ‒ which obviously I must have ‒ I need to pay for it. 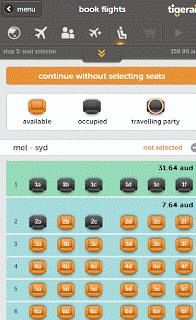 This is not, in fact, true.

I scroll to the bottom of the page without selecting a seat and click next and this is all perfectly fine.

Once I enter my name and address, I then go to the final screen, which summarises my ticket but doesn't itemise the costs. It just provides a booking total of $171.90 — a full $52 more than the expected $119.90 advertised as the cost of the flights.

Does the ACCC care?

I wrote to the ACCC citing the above as an issue and asking the following questions:

The ACCC’s response was as follows:

Thank you for the information you provided to us. The issue you have contacted us about may raise concerns under the Australian Consumer Law. Complaints like yours help us understand what issues cause the most harm to Australian consumers and where best to direct our resources.

We will only contact you again if we need more information. Please see our website for information about the ACCC and the types of matters we prioritise.

So it would appear that the ACCC don't prioritise questions that ask them what they do. I can only therefore assume they don't prioritise company's ripping off consumers online, which begs the question: Isn't that their job?

What are the costs?

There is a cost to consumers that are being "ripped off" by organisations that exhibit the immoral behaviour of dark pattern selling.

There is a difficulty in price matching between various airlines. If prices can't be easily placed side by side, then competition is reduced and normally that means prices end up being higher.

3. Reduction in Online Confidence and Efficiency

The reason this is such a critical problem is that the costs of "doing things" online for a consumer should enhance our lives by making purchases more efficient than other means. These engagements are also significantly cheaper to facilitate for retailers and other providers of services, as there is no requirement for a shop front, the office can technically be "anywhere" and the transaction can occur any time of the day without the need for a person to be there to facilitate it.

Dark patterns reduces confidence, particularly by non-expert internet users ‒ often older people ‒ and therefore take-up of the more efficient retail behaviour is slower and the high costs of traditional forms of retailing remain. For this reason, there needs to be intervention by the Government to improve this confidence.

Taking a small amount from a number of people is far less likely to be reported than taking a large amount from a small number of people. Anybody who does complain is likely to get their money back — consumers are generally encouraged to seek resolution of complaints with the company first. Those who don't bother, however, allow online retailers to get away with their dark patterns. What can the Government do about it?

Why is the law not being upheld?

Many sites have been and continue to be found to be poorly "put together" by User Experience (UX) experts in terms of the way people interact with them.

In the past, this was largely the result of not having the expertise to know how people use the internet due to its relative recency. In recent years, however, this has changed, and large retailers employ UX experts to build and maintain their sites and applications to optimise the user experience as well as to maximise profit.

Having a poor usability experience ‒ especially one involving a dark pattern ‒ should therefore be assumed to be deliberate and the responsibility of online retailers under the law should be to remove such elements from their site. As with other areas of the law, ignorance should be no excuse and fines should be issued to offenders as a multiple of the likely profits made from this behaviour.

The main thing we can do to ensure that consumers are protected online is the same thing that we should do in the physical world. Consumers, particularly those in Australia, may not be able to be protected from sites that are based overseas, but any site of an Australian company should be covered by the same rules that govern offline transactions, namely that dark patterns are a form of deceptive and misleading conduct.

This should be made clear to the ACCC as a priority with big fines to back them up and to the Australian public who should feel confident to report this behaviour.

Getting mothers back to work

2 February 2014, 9:30am The difficulty for mothers to return to work is an enormous economic problem, says ...

14 January 2014, 10:30am There has been an emergence in recent year of “dark patterns” behaviour by ...
Join the conversation
comments powered by Disqus
News updates